Every single beer is a Pale Ale/ variant with the occasional sour, which shouldn’t even be classified as a beer.

This is the start of my annual GABS hottest 100 comments recap, and that was left by someone on the Crafty Pint Facebook. They immediately contradict themselves:

Australians appear to have incredibly blinkered palates when it comes to drinking beer. 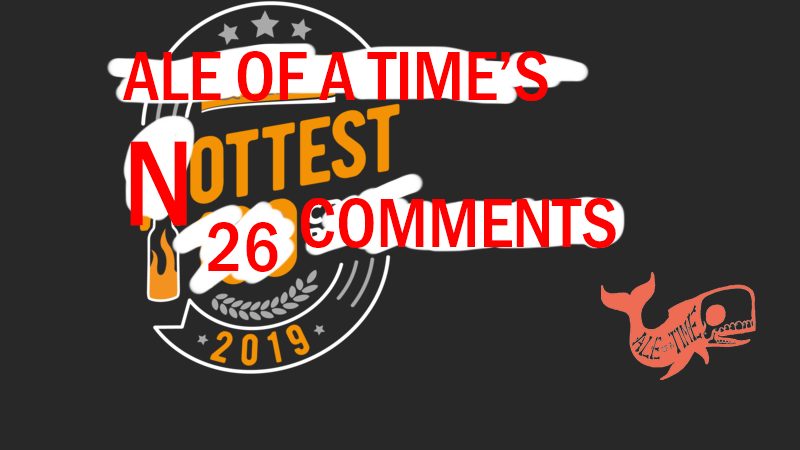 I wasn’t going to do this post this year. These comment-reviews started years ago in response to a bunch of sexist and homophobic comments on a beer article. Somehow it morphed into GABS comments and while its fun to rip on people, I’m beginning to feel a little like Bart in the “I didn’t do it” episode. I’ve literally walked into bars and people are all “so… when’s it coming?” about this exact post. I know that makes me sound like I’m big-noting myself but it’s not, because it’s about the only traffic this blog ever got, or gets. I’d get heaps more traffic by posting hazies to insta and tagging it something edgy like #craftnotcrap.

I’m also not as angry as I once was. Turns out therapy actually works, sorry everyone, for becoming a better person.

But people love that delicious schadenfreude and I guess it falls to me to do it. Are the rest of Australian beer media complete cowards? All signs point to yes.

This year was also weird one because I’ve been fudged up with a concussion for the last four weeks. Trying to live a normal life, with splitting headaches and constant dizzies. Feeling like I’m working on half a brain.

So with my qualifications shored up, let’s look at some more comments starting with a predictable post pointing out that Dan Murphy’s, who sell one third of all alcohol in the country, stock popular products:

…sick to death of ficking Dan Murphy’s dictating the top 10 list so only beers they have the rights to sell top the list. This is absolute rubbish and I’ll never gabs again. No wonder Carwyn cellars are doing they own damn thing these days for legit delic brews.

Secondly, I see this comment a lot, but every time I go into Dan Murphy’s I see a lot of beers that never make it into GABS. Do people think Dan’s just sell 10 beers and 10 beers only. There’s a lot of trash beer in Dan Murphy’s that never polls, and never will, because it’s trash.

Carwyn is pretty rad though, but I’m not sure what “they own damn thing” is here. They also sell some shit that I don’t like.

Shops sell a range of things to cater to a diverse audience.  Delic? More like ridic.

Luke, with a solid name, decides to wheel out a pretty tired joke.

Congratulations to the nickelback of beers

I saw this joke a couple of times and by now Nickelback-as-a-punchline-is so played out that it’s becoming (wait for it…)
…
the Nickelback of jokes.

Mark asks, what if not Nickelback, but shop:

@stoneandwood is the general pants of beers

Mark is a generally pants commenter.

Another guy with some great current comedy.

The Seinfeld episode that launched this joke format into the zeitgeist was 20 years old in 2017. TWENTY YEARS.  You gotta keep up with current comedy, in this fast moving world. Like, me, with all these cool gifs.

I didn’t note who said this next one:

I mean, yeah? It is sponsored by Dan Murphy’s it’s right there on the website. They make no secret of it and in fact, by the nature of the deal, make it very public. Good not-boring comment though.

I forgot to note down this person’s name as well:

Do what Beervana do in NZ and take it from votes at the event rather than this ridiculous popularity vote, it’s becoming a joke 🍻

It also runs a People’s Choice at each event… which is exactly what you are suggesting.  JFC whoever you were. Think before you type. People can read this.

Here’s Muzz Wall, which is short for Muzzle Wuzzle.

Good on you muzzle. You don’t have to like it, and you certainly don’t have to follow it. You can make your own choices and in the spirit of good digital wellbeing I suppo…hangon let me just double check…

But S&W Pacific the best craft beer in Oz? No way. Popular? For sure.

I mean…. Yeah? We just did an entire poll about this that you are commenting on. It is, indeed, popular. You gotta keep up TJ.

“ooh I wub you stone and wood we can be frieends”. Yuck.

Slap ’em down Stone & Wood. They sold out to big beer and you are fierce independents. Jam it in their faces:

Someone else I forgot to note down:

dude just like the US elections the winner is decided before voting even begins thus is the fate of this laughable so called world beer event. @gabsfestival has to stop biasing and making it win.`

What’s this fella clued into that we don’t know? He then replied immediately after… maybe in haste to cover his tracks. Here he suggests people vote because they recognise the label.

popularity? 🤔 more like default mode. Ppl vote for it knowing the label as they don’t know the others….esp the % of voters who don’t go past generic tap beer….ohhh I think I remember that orange label….yeah….yeah I had one of them. And that’s how they vote.

I wonder if the immediate second post was designed to muddy the waters of his first. Throw us off the scent that he’s dialled in to a wider conspiracy like any good disinfo campaign. Matthew, give us a call. We’d love to have you on the Hypothetical Institute.

I found him again. Three comments (at least), so you know he’s serious. He even tells us:

I take beer seriously dude. And they promote this as a defining craft beer poll. With coppers green even in the list and this winning it negates any imposed titles

He takes beer seriously, dude. I snooped on his insta and couldn’t find one beer pic. He did post one of those “oh you think boomers ruined the planet we didn’t even have fast food and plastic bags checkmate millennials” walls of text.

Someone else I didn’t note down:

I thought it was about taste. Pirate life still do a good job. Fact u don’t see any garage project in any rankings says alot

lmao it DOES say a lot that a New Zealand beer didn’t place in this Australian poll.

Another Matt with another conspiracy! This is great:

No way this beat Balter. I’m hearing GABS are deleting comments calling them on cooking the books

Reality: the team at GABS mainline all your shitty comments right into my inbox.

There should be a rule that excludes mass produced yuppie marketed beers. Marketing on point. I like this beer, but there are plenty better… it’s so “mainstream” now, which goes against what craft beer is intended to be

Craft brewers: I should make a beer that I like, and people will enjoy. I can sell it, promote it, and employ people while earning a living at the same time.

Clay:  Well first of all, fuck you.

what horseshit is this babble….😆 it is comparing it to generic VB but easy with your drinky breath talk hey

“easy with your drinky breath talk” is 100% something I’m gonna start saying from now on.

My god, have we truly evolved? Pale ales, the Aussie lager.

This is one of those statements that really hurts the mind if you think about it. All of the top selling beers in Australia are lagers by a wide margin. An insane margin. Like 90% of the market still.

Yet another conspiracy, this time from Ben:

it shows that it pays to get an IT guy to vote with bots.

Stone & Wood, god love ’em, are a bunch of hippies. Last time I was there I was like “wow bold choice to have forest-green and white linen as a staff uniform” but I asked and it turns out that just how they all dress. All of them in their swishy linens like a weird cult. They have computers and stuff, sure, but these linen clad hippies aren’t running bot scams.

interesting to see how many repeat voters there are and demographics of voters. Interesting further how a hell of a lot of bottlos struggle to even have stone & wood. How they keep giving this beer this award is anyone’s guess but it seems to have worn thin now with many. 1 beer repeatedly taking it out given the depth of field?….is this a rigged result known prior to voting even commencing….🤔

Matt, none of what you said was interesting and I’m honestly not sure what you were saying at all. Demand is high and lots of people want to buy it and then it gets voted top in a popular poll…

Andy takes us back:

Lucas has some ideas on how to improve things:

Why not keep state votes seperate and the combined average finish determines the top 100. But definitely agree with the new beers only. You don’t see triple j’s hot 100 for this year filled with songs from 15 years ago.

1) what? You want votes separate and then a combined average? And then what exactly? It might be my concussion speaking but what? What exactly is this idea?

2) You don’t see Triple J hottest 100 filled with songs from 15 years ago because bands don’t keep recording and releasing the same song. And there were a bunch of covers in the Triple J this year. There was a straight cover of Bulls on Parade in the top 10 (no disrespect to Denzel Curry. Listen to his last album, it’s very good).

Breweries have to keep making beer because once a beer is drunk, someone else can’t then drink it. This isn’t complicated.

Doesn’t even make my top 100. But hey each to their own

Each to their own but still. my taste is better. But hey, no judgement if you suck. Per me, Jason, the best.

Nathan with a zinger:

For those interested check out Willo and the Geeza beer lovers on FB.
We’ve been to 70 of the 84 W.A. based breweries over the last 9 years.
Personally I’ve been to 80 nationally.

Sneaky little promo  and a sick flex from Jase. 80 breweries in nine years. Go off on them king.

Anyway, that’s about the rub this year. A slew of deadshit comments. There were more about James Squire and Little Creatures or whatever being on the list. These dorks need to realise that they live in a golden age. It was only a few years back we had to choke down caramel bomb old-ass IPAs and grovel at the feet of James Squire. Occasionally they’d throw us scraps like a hoppy hefe and we’d be all “omg craft beer is off the hook” (which is how we spoke back then. Crazy times). Now you can walk into Dan Murphy’s and buy local sours, legit saison and fresh IPA. You have no idea what it was like.

What’s cool is finding peeps whose minds are blown by these beers. Like this comment on the #1 announcement.

Haha never heard of it. Any good?