A Foster And A Forefather 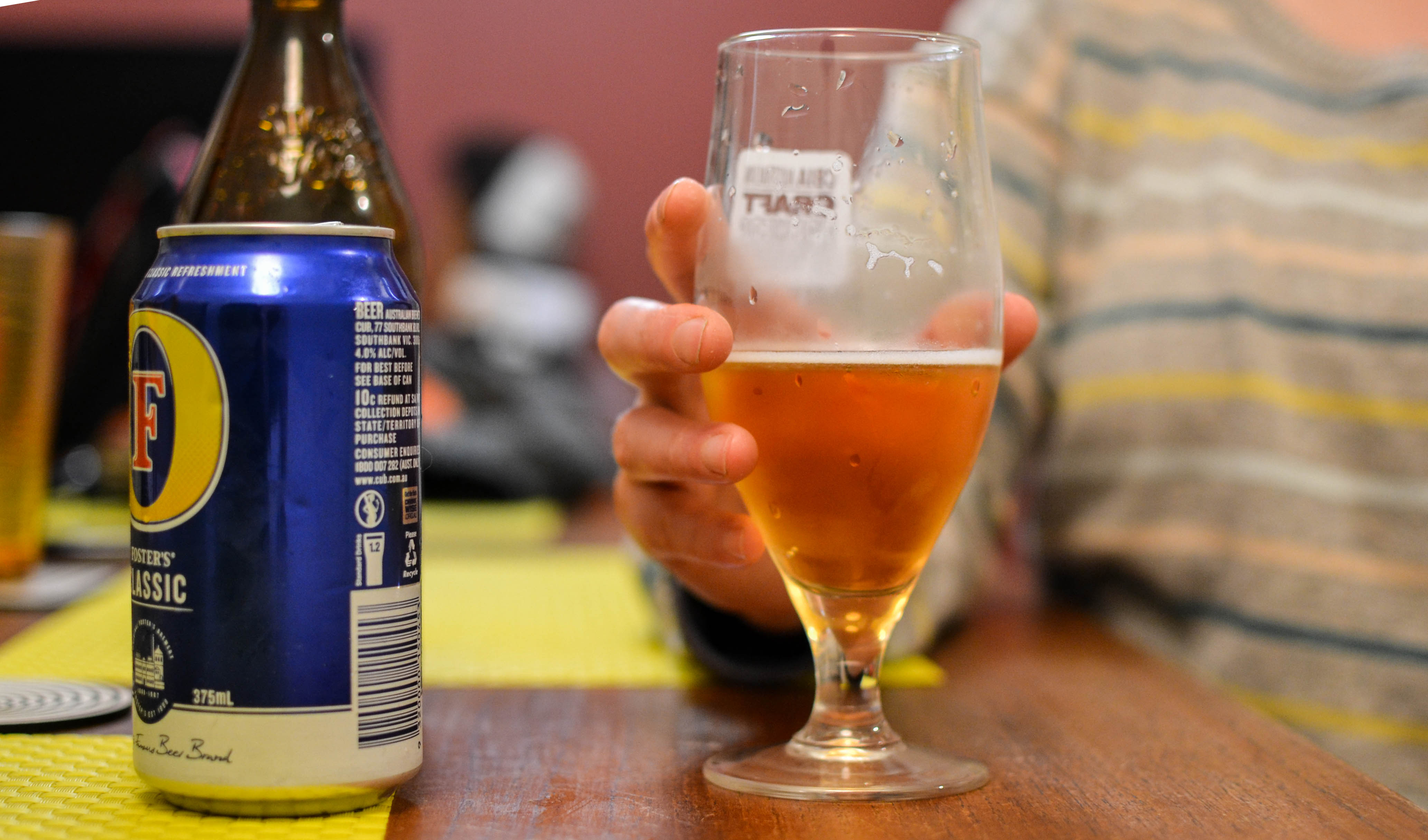 I had a request from the USA to grab a can of Foster’s to help illustrate a story. When I got the email I said I wasn’t sure if I could. I can’t remember the last time I saw Foster’s anywhere.

At my local Liquorland I could get Budweiser, Miller and Coors. I could get Sierra Nevada and Blue Moon. When I asked if they had Foster’s the guy seemed surprised. “Not anymore,” he said. I tried one of those weird little bottle shops nearby. With bars over the windows, scuffed linoleum, fading promotional signs and a weird smell. Success! $3 got me a tin of Australia’s finest. It dawned on me that I’d never tried it and I was actually looking forward to giving it a spin.

Let’s be clear about one thing – while the natural state of beer geeks is to shit on big brand export lagers as much as possible, I went into this with an open mind. Lately all I’ve been wanting to drink are pale lagers and pilsners, and James Boag’s Premium Lager has found it’s way into my fridge a couple of times recently. I figured Foster’s at least had to be competent, right? I went into this with a clear goal to not shit on it but to take it for what it is; an export lager designed to be inoffensive and easy drinking.

Before we tackle the beer, let’s see what they have to say about it on their website. 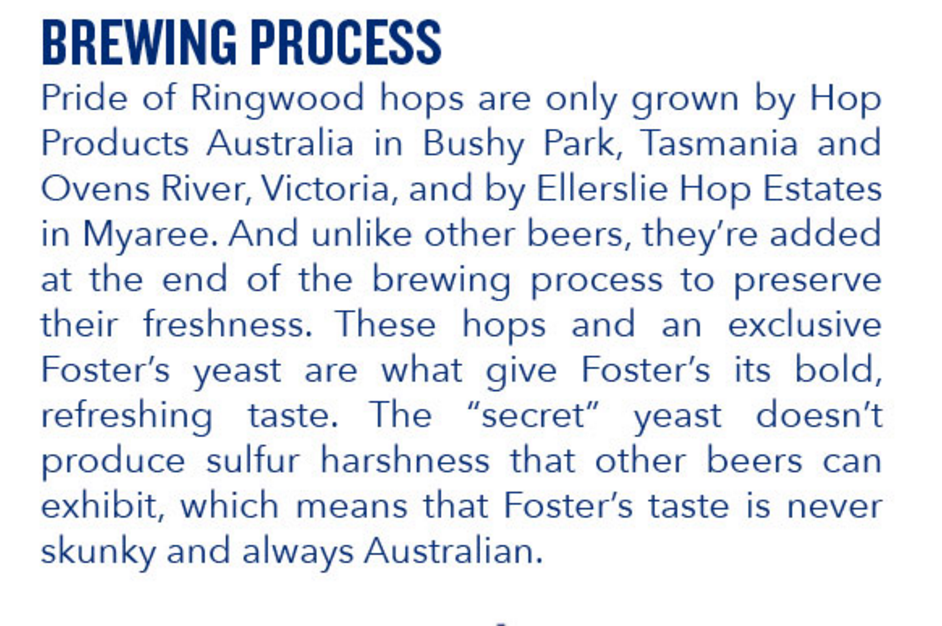 Ok so not really off to a great start here are we. It’s hard to know what to pick out here, and I’m still trying to not be nitpicky.

According to Wiki, and their cited sources, the “secret” yeast was brought out from Europe in the 1920s. I did some googling to find any verification for this but couldn’t find anything reliable. Also Wiki suggests it’s hopped using oil extract (which isn’t always a bad thing). The suggestion the yeast prevents “skunky” flavours is an interesting one, as is the talk of one yeast; when they offer both a lager and ale. However, there are a bunch of craft breweries stretching those terms all over the place so it’d be unfair to judge too harshly on that.

Edit: I just realised that info comes from the US site. Which is actually owned by a different company altogether. Interestingly when that page shows up in a search, here’s how it looks:

Someone has obviously made a bit of a mistake there. CUB headquarters are in Southbank, but the beer isn’t brewed there. Also the beer brewed for the US market is brewed in Texas, not Australia.

I did come across this comment from a news story about Crown Lager which I thought was fun...

as a member of the marketing team for CUB (fosters) many years ago I can now saw without fear of prosecution (because they don’t who I am now!!) Foster larger was re marketed as Crown it’s the same beer in a different package, it was way back then and I’m pretty sure it still is now. Foster larger was very popular with ex-pats but not at all with locals, so the fosters brand continued overseas, while in Australia it got a new bottle and a new name. Try a blind taste with fosters larger (you may need to search high and low to find it) and crown, you will not pick any difference what so ever

Not so much for the claims, but more the fact that an ex-marketer should probably know how to spell “lager”. There’s also this over at Brews News about the history of Crown Lager and how the two are entwined. Based on Matt’s experience with the company and my rapidly waning interest in this, I’m not going to seek clarification. Let’s find out what the beer is like, shall we? 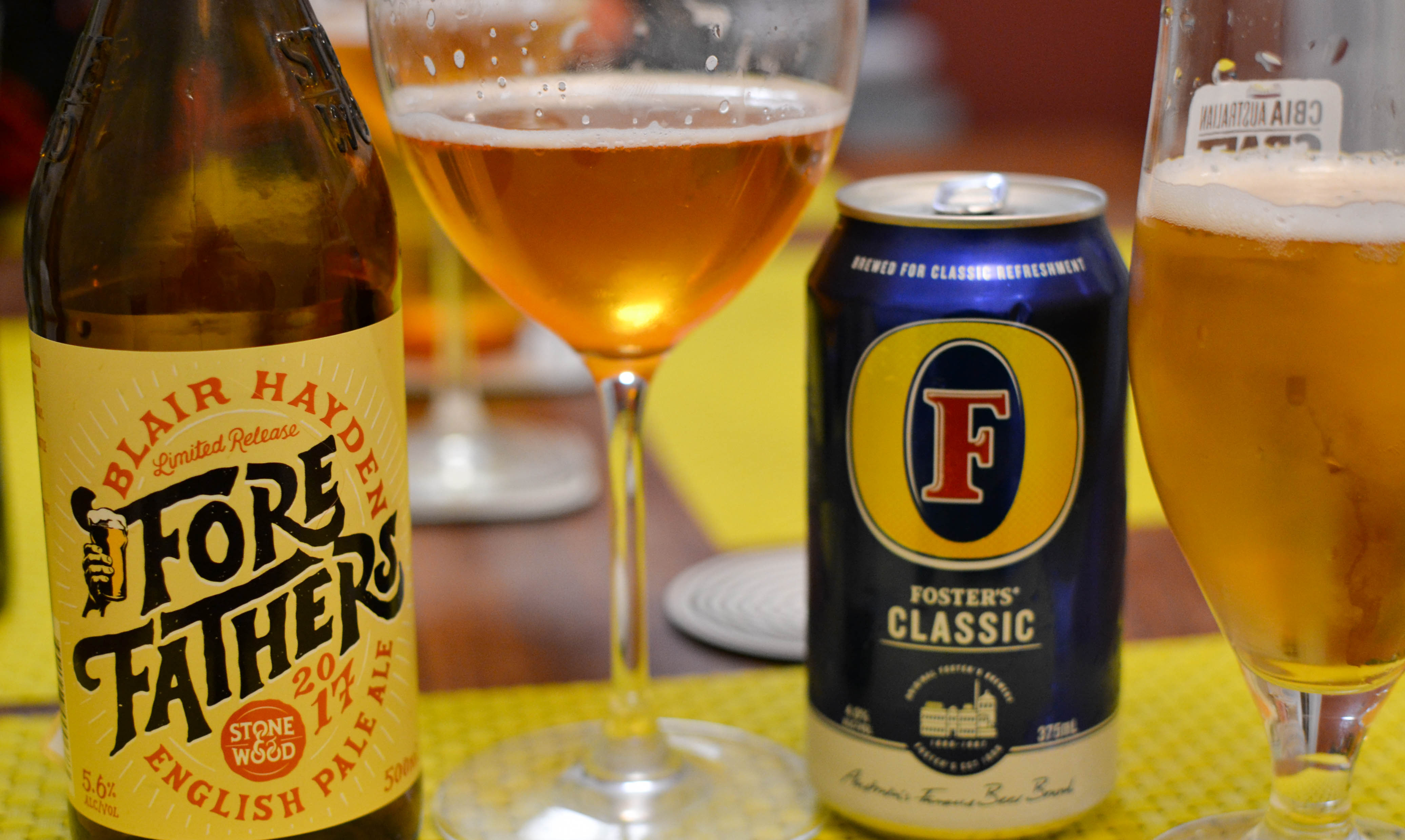 Also tasted was the latest Forefathers release from Stone & Wood. An English IPA brewed with Blair Hayden from Lord Nelson Brewery. It’s spicy, a touch grassy and has a lovely toffee finish. Drinkable and full of character without overwhelming at any stage. The Foster’s; I enjoyed a lot less. My first thoughts were literally nothing. As in, it tasted like nothing. Maybe a touch of spice from an ester or a hop in there somewhere but otherwise it just rolled over the palate with a whimper and then it ended. So not that bad, to be honest. “Nothing” is better than a lot of other beers on the market. Unfortunately it wasn’t done there. As it warmed a touch and my palate cleared of the Stone & Wood beer, a few other characters emerged. Something resembling “old pub on a Sunday morning” and “the toilet of an old pub on a Sunday morning”. Kind of sickly stale and a touch sweet. A few degrees and it moved from boring to unpleasant. I’m sure if you were smashing these right out of the tin it would be fine. On a hot day right out of some ice maybe? I’m told the green cans (ale) are a bit more exciting but I’m not going to rush out to get one. Honestly, I felt a little let down. I had hoped to write a post exclaiming “Foster’s ain’t all bad!” I had a desire to be a bit contrarian. I wanted it to be good so I could smugly proclaim things like “it’s a well made consistent lager” and make myself feel better by saying “it’ll go unappreciated beer geeks who are just chasing the current IPA and a shiny label”.

“Oh you foolish young things” I would say. But alas, I can’t see myself rushing out to get more.

Before we wrap this up, a note on the price. I’m interested in the pricing structure of Dan Murphy’s (and assumably other big box stores). Foster’s is a great example of how weird it is. Check out the difference from singles, to six packs – where the prices of the three below are reasonably comparative. Then the jump to the slab where it’s almost twice the price for the Stone & Wood. The Boag’s is basically a slab for the price of two six packs. I’m sure economies of scale are a big factor but I also can’t help but wonder if they know they can get away with letting single and six pack prices creep up, just below “craft” beer, and then undercut massively on bulk. I don’t really know how these things work but it is curious (note: I’m not suggesting anything untoward. When I say curious I mean I’m actually curious).

Anyone else in Australia not tried or tried Foster’s? Do you see it anywhere? 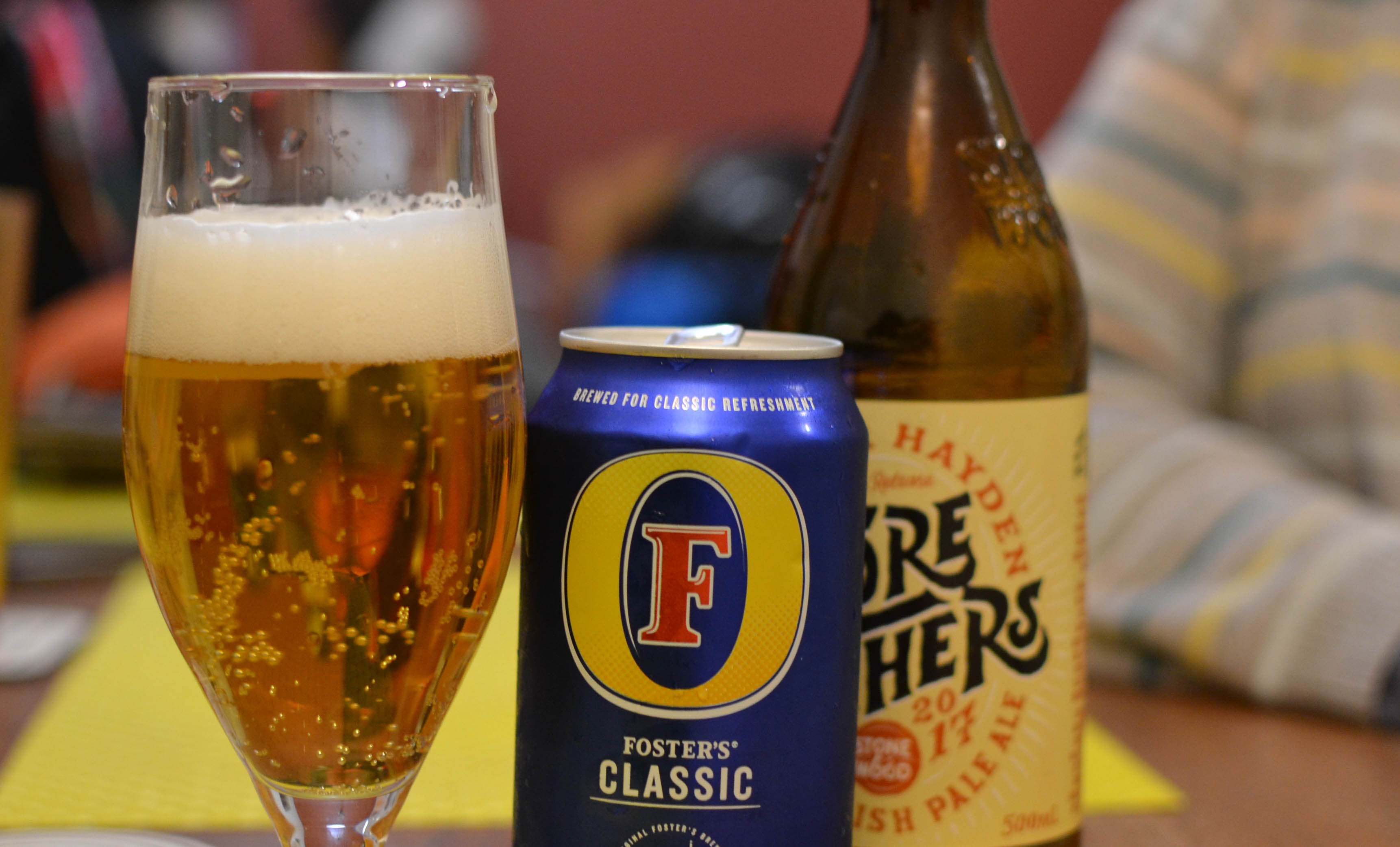