It’s winter time and I’ve ended up with a small handful of dark beers in my fridge. So I figure I should do the most cliche thing a beer blog can do… So welcome to Winter Time Dark Beer Extravaganza Week, or WTDBEW for short.

First beer for WTDBEW is from a new contract brewery based in Torquay, Victoria. They launched with a crowdfunding campaign earlier this year and their beer is just starting to make appearances on tap and in bottles around this part of the world.

I never know what to think about crowdfunding campaigns. While I’m pretty wary of them, I can see why they are used and think they work as a marketing tool, rather than a base to build a brewery. While looking over the campaign, and having seen breweries come and go over the years, it’s hard to not hear alarm bells when reading the founder has “created and sold companies in the design, marketing and real estate industries over the past 15 years”. Combine the words; crowdfunding, contract, marketing, created and sold…  we’ve been down this road in the beer world and 99% of the time it’s a recipe for mediocre lager with a dumb joke name.

Fortunately the founder, Scott Hunt, has been a homebrewer for over 20 years and the beer he’s bought to market isn’t a lager, nor does it have a dumb joke name (wow, I fish-hooked you guys good with that didn’t I!?).  Let’s dive in to what this actually is. 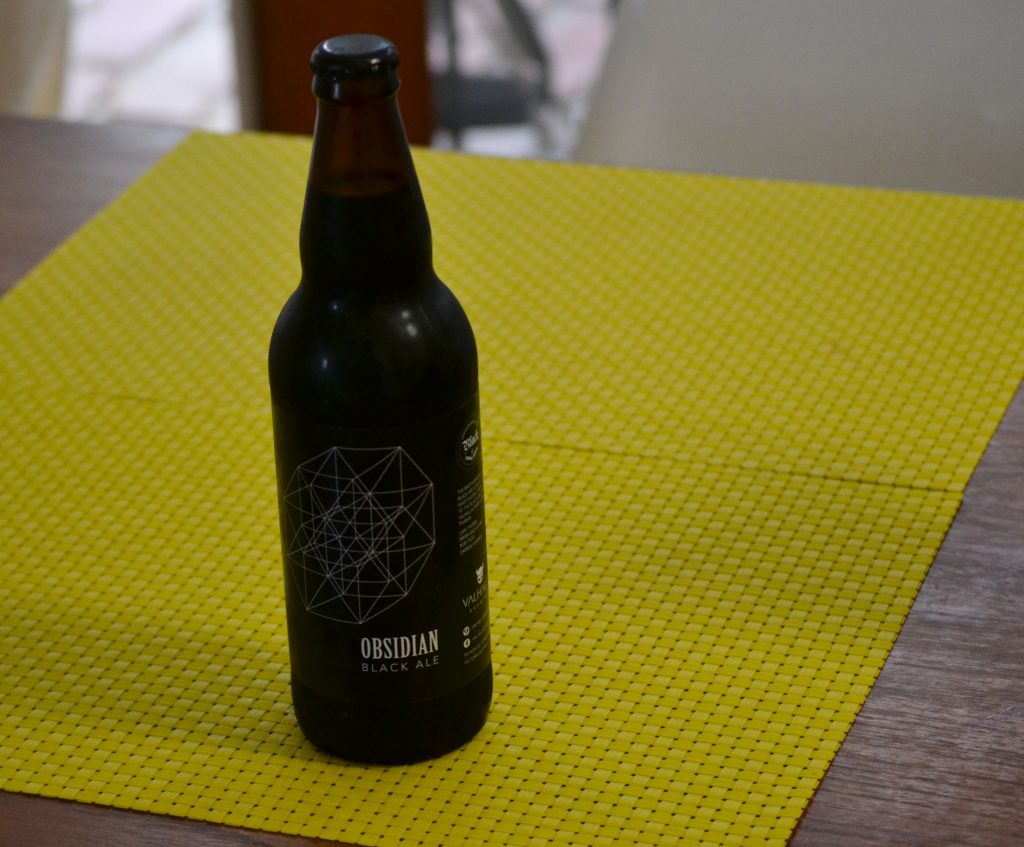 A 60 IBU, 7% Black IPA, this has Centennial, Tettnang and Mosaic hops.

Launching in a regional Australian town with a Black IPA is a pretty bold move, but Scott has jumped right in. I can think of only one other brewery that has launched with a BIPA as their sole beer and that is the Yeastie Boys and Pot Kettle Black (in before “omg it’s a hoppy porter”. Tomato tomato).  The Valhalla version comes in a 500ml bottle and has a black label with some sort of geometric design on the front. I’m guessing it represents obsidian rock but geometric shapes and geology are both way beyond my education. It looks great though. Classy and slick. 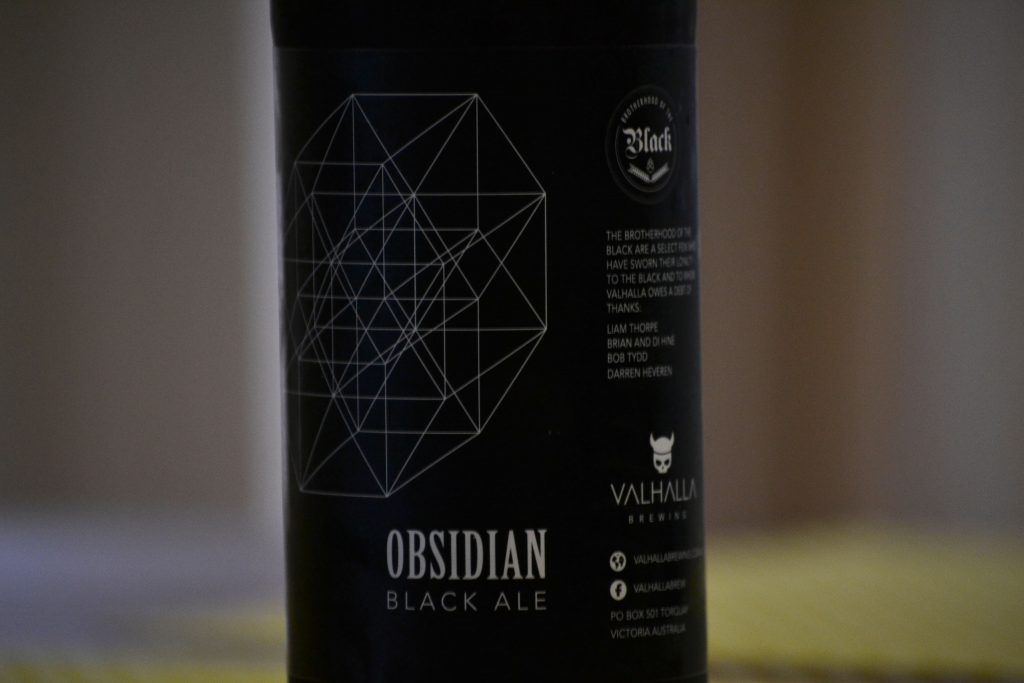 The beer itself pours black with cola coloured edges and a beige head that just doesn’t want to leave. As I type this I have maybe two mouthfuls left and it’s still there. The whole aesthetic experience is excellent with this beer. 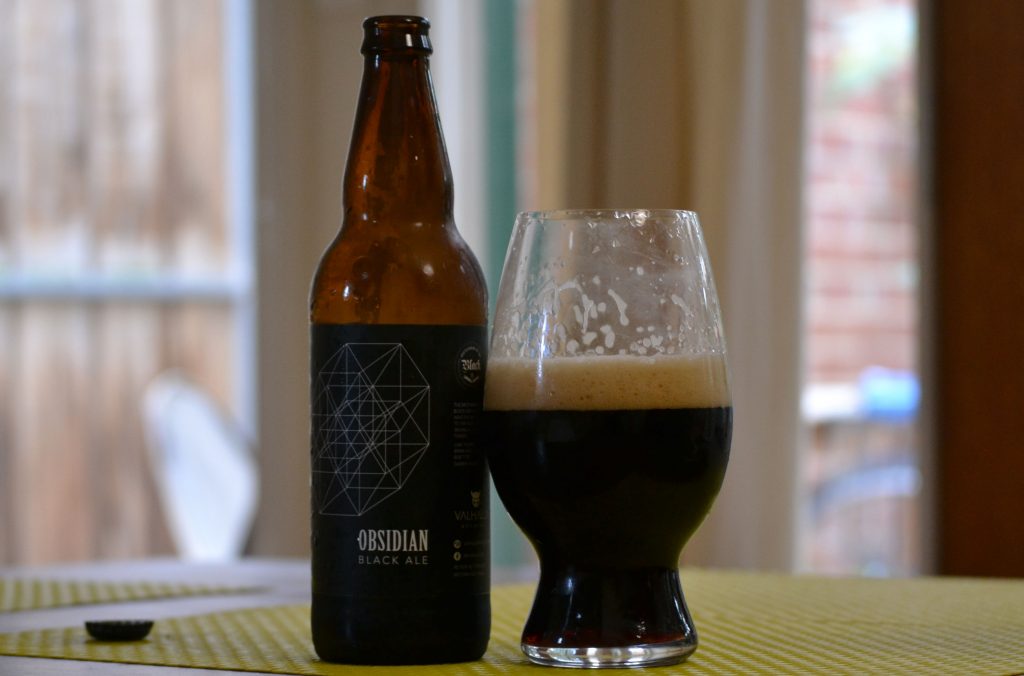 I get aromas and flavours such as powdered cocoa, caramel, overripe blueberries, and as it warms, freeze dried raspberries stand out in the initial palate. It’s all followed up by roasted malt, more cocoa, fruit cake, warm oranges and a solid bitterness. There are moments where I think there is something off, but the more I drink it the more I think it’s simply a clash of big roasted malts and new world hops. It’s an experience I have with many Black IPAs which is probably more of a personal palate thing.

It’s the first time in a long time that I’ve had a Black IPA in such a large quantity, and it’s really doing it for me. It has a lot of flavour and a lot going on but it’s still very drinkable. The mouthfeel might be a tad thin, but that just serves to keep it nimble on the palate.

A few years ago, when Black IPAs were the new hotness, I was ticking them like a mad man but recently everyone stopped making them and I stopped drinking them. It seems there has been a recent upswing in the style here in Australia and revisiting it with a “review” hat on maybe I’m finding a new appreciation for them.

The balance in this will also lend it to a lot of food and you could almost take it through an entire meal. Foods such as oysters, mushrooms, steak, roast beef, citrus tart, blueberry pie, chocolate pudding, fruit cake, and sharp cheddar. It is tasty but not overwhelming. Ideal for a lot of food. 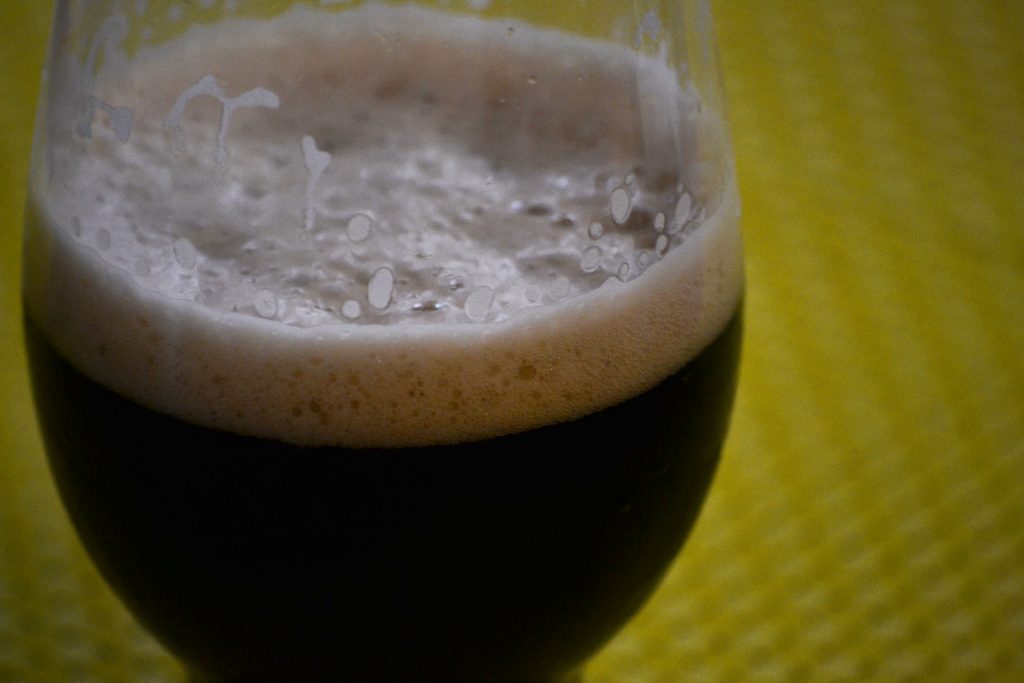 Sample was offered and supplied by the brewer.