Changes are afoot at Little Creatures, as the move to bring the White Rabbit brand closer to the new East Coast home in Geelong, and the rollout of parochial-Victorian brand Furphy raise some questions about which direction they are heading.

I was a little disappointed when parent company Lion opted to close down the original White Rabbit in Healesville and move it to Geelong (on the same site as Little Creatures). While I didn’t love the White Rabbit beers I always thought the brand was a good fit for Healesville, an area surrounded by food and drink producers that attracts a number of tourists. Putting all their eggs into the basket of Geelong seems a bit odd… but I work in big business so I understand why decisions such as this are made.

Now we see some media around “Furphy”. A beer that’s been around for a short time that looks to be an attempt at a “regional” Victorian brand and an attempt to capture a slice of the entry-level and “approachable”market.  The story in Australian Brews News and accompanying quotes from, Little Creatures Head Brewer Warren Pawsey, triggered this piece (it wasn’t the only beer to trigger the piece of course).

I haven’t heard a bad thing yet about Furphy. People try it and they like it. It’s not got a demographic that locks it in, it’s an everyday beer for everyday people,” he said.

“It appeals to most people but I think if someone was really into their IPAs or barrel-aged or sour beers, they’re probably going to find Furphy not too challenging or satisfying.”

The latter quote is one that really doesn’t sit well for me. I do quite like an IPA or a sour beer but I also really enjoy a well made easy drinking beer. The story says this beer is kind of a Kolsch-cum-Australian Pale-sans-yeast-profile (Australia Pale is a style that I’m not sure really exists outside of Coopers, but that’s beside the point). I quite like a Kolsch… so to be told I’m probably not going to find this satisfying is strange and probably an indication they are trying to fit a brief or hit a market share, rather than make a great tasting beer.

“The concept was for a beer that was subtle, more subtle than [Little Creatures] Pale Ale, and would appeal to most people,” he said.

The above is also interesting. If you talk to people deep into the beer game in Australia, LC Pale is pretty much the beer that got them jazzed for good beer. For me it’s the perfect beer to push the LC brand forward but instead it appears the path is towards the middle of the road mass-appeal “craft”. A category that is getting out of control in Australia (Toohey’s Pale, Matilda Bay, James Squire, Cricketers Arms, Sail and Anchor, Steamrail et al). LC is kind of in that space but has always had a bit more cred with the geeks due to the love for the Pale.

It also makes me wonder where their Bright Ale fits into all of this.  Bright is a toned down “approachable” beer, good for people who might find the pale a bit too bitter or confronting. Also a beer that has been on the chopping block before as per this blog piece: http://250beers.com/2014/03/06/the-futures-bright/.

You’ll notice the top comment is from me, voicing my concerns about the future decision-making with Lion at the helm.  Maybe the future is not as bright as suggested?

Outside of the intended appeal of Furphy, the branding of Furphy really raised my eyebrows. 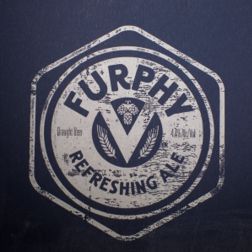 It’s not branded as a Little Creatures beer, it’s not on the Little Creatures website, but instead has its own site. While there are still mentions of Little Creatures on that site, it’s reasonable to say that it keeps the association at arm’s length, rather than firmly in the bosom.

Instead of Little Creatures branding it is strongly branded and pitched as a Victorian beer, and undoubtedly reminiscent of the Victorian “Big V”.

Even the bottle has an interesting and somewhat unique shape.

You don’t have to look too far to find another beer, aimed at “everyday people” with a prominent V and an unusual bottle shape.

You would be foolish to assume it all coincidence and chances are this was all designed in a boardroom rather than with intent to make a good beer. Which is a bit sad really.

Additionally any push for this is undercutting Little Creatures’ products themselves and splitting their own market, not only away from LC but also Lion stablemate James Squire. I’m sure a lot of market-research went in to it but I’m not sure the result has produced a product with any longevity, whereas both Little Creatures and James Squire have both proven themselves in the market and continue to do so.

The final part worthy of remark from the Brews News piece was this:

“Nick and Howard were very complimentary,” Pawsey said. “They said something like, ‘you’ve done a good job. It wasn’t exactly what we were thinking but you’ve filled out the brief quite well’.”

Nick and Howard being the founders of Little Creatures (no longer involved), with the latter also the founder of the creative agency behind the branding and strategy for Furphy, Braincell.

The first noteable part is the lack of enthusiasm shown in the quote. “Quite Well” and “good job” seem damning with faint praise to me. But you can’t read too much into a second-hand quote. What you could probably read a bit more into, however, is Braincell have since ended their association with Lion and Little Creatures. Announced a day or so before the Brews News story.

So what of White Rabbit moving to Geelong?

I’m sure I’ve seen hints at the intent but they were confirmed by this story in the Geelong Independent (left hand side):

“When operating on the same Geelong site as the Little Creatures Brewery, White Rabbit Brewery will add to the brewery village experience,” the application said. “There will be barrel fermenting, souring and developing of beer styles, using a range of new and old wine and spirit barrels, something we have not yet seen on a large commercial scale in Australia. “The new White Rabbit Brewery will enhance and extend the craft beer village atmosphere of the Swanston St site while driving additional tourism and visitor numbers to Geelong.

Well, that’s pretty clear.  It’s exciting (because I’m someone who can’t possibly be excited by a beer for the everyday person of course) and kind of in-line with what Little Creatures were doing at their Great Australasian Beer Spectapular stand which featured a barrel-aged sour ale to be blended with their core range. While it wasn’t the best sour going, it was fun to see sours and blending presented from a large brand. Now it looks as though future beers in that vein will be under the White Rabbit brand.

With all that said, Little Creatures (the brand) isn’t doing nothing. A recent “Shift Brewers” release (brewery only) and their “first ever seasonal” in the form of a re-do of their Small Batch Dreadnaught, now called Return of the Dread show there do appear to be plans… but it all just seems a bit muddled.

I’m sure Lion have a clear strategy and well mapped goals for all three brands but I’m not sure they are clear to consumers and often that is just as bad as having no map at all.