Right now in the US barely an adjunct stout is released without a line out the door and tales of people hiring homeless people to sidestep allocation limits (yes, this happens).  In Australia, however, such things don’t happen. The Mountain Goat Barrel Aged Imperial Stout release was the closest I think we’ve seen to such scrambling, where bottle stores had a very small allocation (some only received one) and most, if not all, were sold before they hit shelves.

For the most part though, if you want any release in Australia you can just wander in and grab a bottle from a specialty store or online at one of the handful of retailers.

Imperial stouts also don’t seem to have the wide-ranging appeal in Australia that they do in the USA. Whether that will grow with time, or it’s cultural, or climate driven is anyone’s guess but if you really want a local release there is no need to line up at 4am with your grandmother in tow (yes, this happens).

While high abv adjunct-imperial stouts are far from my favourite style, when I have a good one I’m reminded why it’s a style that lights up ratings sites like few others, so it was with curiosity that I grabbed a bottle of the recent Bright Brewery Stubborn Russian. A 16% imperial stout brewed using local chocolate and coffee producers (Bright Chocolate and Sixpence Coffee), it’s the first from brewer Ryan Tyack. Given his background at Brewdog, a brewery responsible for a number of high abv “extreme” beers which often have adjuncts such as coffee or chocolate included, it is an interesting local bottle to have on shelves.

Happy to not be in the US, I picked this bottle up from Slowbeer in Melbourne. I believe there are still some around as well. 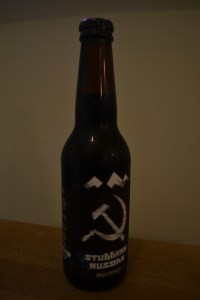 Other than a faint trail of dark brown bubbles there is not really any carbonation to speak of, which is to be expected, but it doesn’t pour as thick as many beers at this end of the abv scale. More chocolate milk than oil slick, suggesting this has reasonable attenuation and lower gravity than many of the big name imperial stouts out there.

Poured cold from the fridge it smells of glazed carrot, ashy chocolate, coffee bean, brown sugar, with alcohol somewhere behind. Once it gets to room temp the carrot and ashy aromas fall away and leave mostly milk chocolate and raw alcohol right at the end.  I’m not sure where the glazed carrot comes from here, possibly the coffee (coffee has differing levels of carotene which could possibly be coming through in the nose for me… or I’m just talking shit. Who knows).

It tastes of brown sugar with an initial harsh bitterness – like 90% chocolate. It smooths out soon after and leaves brown sugar, milo and a reasonable alcohol burn. A long hazelnut, almond and cold drip coffee finish are pushed along by a lot of booze. A bit of soy sauce and vegemite round it all out.

It doesn’t end sweet or cloying but quite dry and somewhat drinkable. A lot going on but shows  finesse and surprisingly it seems measured rather than a full on assault. The attenuation helps leave it dry rather than tiring after a half a bottle.

I really enjoyed this. It brings a savoury element rather than a cloying sweetness and it doesn’t assault with booze or too much flavour. 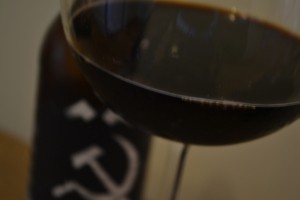 There was a time when the only real extreme high-abv beer you could snare off the shelf to blow the minds of your mass-lager drinking buds was Brewdog’s Tokyo* and maybe something from Murray’s.

Now this 16% release has slipped right under the radar and you didn’t even realise.

For stockists and information on their “Mash” subscription thingo check out their site here: