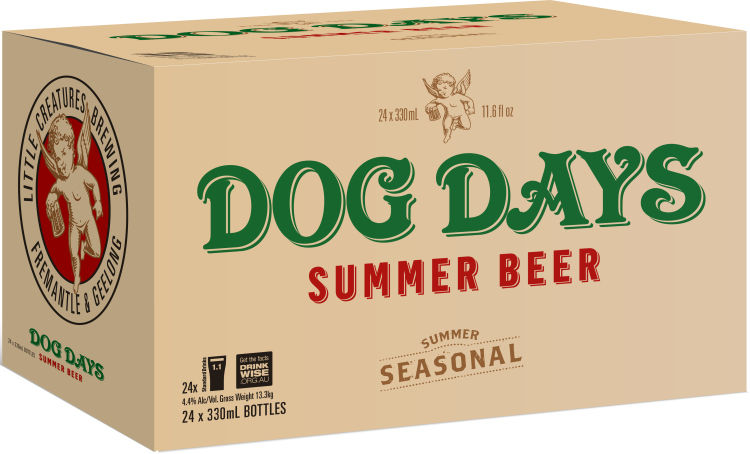 The new Little Creatures seasonal release is a 4.4% “Summer Beer”. Or in other words; their new “tweener”.

tweener
ˈtwiːnə/ noun US informal
noun: tweener; plural noun: tweeners
1. a person or thing considered to be in between two other recognized categories or types.

Increasingly ubiquitous the Australian- tweener style comes in the form of a sub 5% ale, labeled usually with the words Australian, pale, golden, summer, or Pacific. With some new world hop aroma, they are generally light in colour, mild on the palate, displaying soft carbonation, a clean finish and lie somewhere between 15-30IBU.  Some ale yeast aromas may be present.

Not crisp like classic lager styles, not bitter enough to be an American style pale, and without the yeast to excite like a classic Wit or Hefe. They are usually neither amazing nor are they offensively bad and 90% of them come with a press release that looks something like this.  They are a style that generally elicits a massive “ehhhhh” from me (with some notable exceptions).

That isn’t because of quality, or they are poorly made, it’s just that Australian beer is not short on this exact beer from an increasing number of breweries and brands. Obviously the reason is that people are buying them but it feels like we are reaching market saturation.

Let me illustrate my point with two lists. The top being Australian examples of the style (and one NZ example made for the Australian market in the form of a new Monteith’s beer, designed to grab a slice of this lucrative pie), the bottom NZ.

Before continuing I need to make some caveats.

Looking at these two lists you’ll see why I’m somewhat jaded about this new limited release beer from Little Creatures. It’s not a horrible beer. The aroma is decent but other than that it is a highway to nothing. Just another example of an Australian tweener that I can’t muster up the enthusiasm to even give tasting notes for. If you’re an Australian beer drinker, you’ll know this beer. It’s good – but who cares. So is most of the list above.

Their previous limited release “Return of the Dread” was a brilliantly made stout and had all the hallmarks of a classic beer from start to finish. A real treat and one of my favourite beers this year. I would’ve loved for them to follow it up with something a bit more exciting. Trust that beer drinkers are ready to take a step up into something bigger than their famous Pale Ale but instead with this and their recent Furphy release they are continuing to ask drinkers to step back into “gateway” styles. I have no issue with the gateway segment but if you are going to do one, then make it interesting. A twist on their pilsner or a classic unfiltered lager. Or instead use the dual-coast capabilities and supply chain they have to push out an incredibly fresh session IPA, or a double version of their Pale Ale.

You have to assume that drinkers are ready for a challenge more-so now than when Little Creatures first broke out with their Pale Ale so why not use their marketing and supply clout to challenge drinkers again (before people point to their IPA, my personal experience with that is a mixed bag of sublime to fine to diacetyl, and I don’t feel it was a bold enough statement but rather a bit of a pulled punch).

With the craft segment growing at an incredible rate, tweeners continue to be made and marketed at the gateway but the gates are getting flooded. And when drinkers make it through they will go looking for something new and exciting. You have to wonder if the bigger national brands really want to fill that need or if they are content just filling up shelf space.

With this seasonal release what they’ve given us is more Groundhog Day, than Dog Days.

Samples of the beer were provided by Little Creatures.