It’s a word thrown around beer drinkers pretty loosely isn’t it, I’ve used it when all I had was a cardboard box in a cupboard. Now I have wooden cupboards in a shed that are lined with tin. The temperature is very stable (7 to 12 celsius year round),  it’s nice and dark and keeps around 100 bottles comfortably.

Also it is just annoying enough to get to that it makes it less tempting to dive into something rare and boozy at the end of the night. 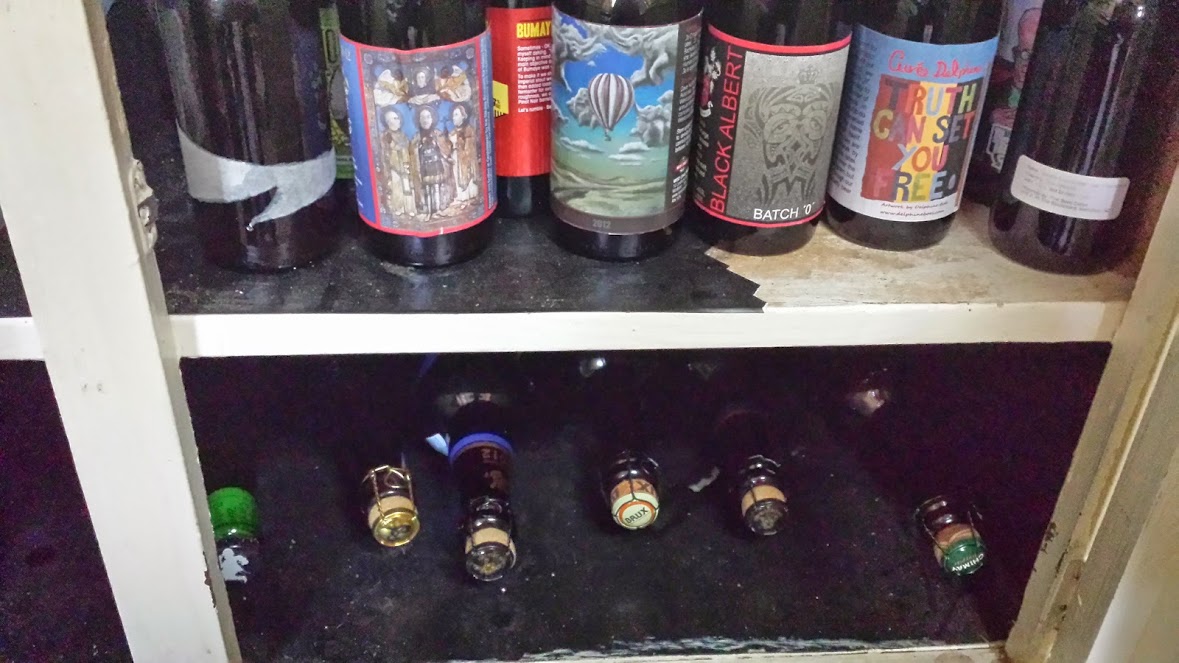 A snippet of my cupboard

Cellaring beer is something a lot of people get wrong.

There are photos around the internet of massive, lovely cellars. Organised and pristine; or junky, dusty and overflowing.

I worry about those cellars. I worry how many of those beers are going to dive right past being good into oxidized lifeless messes. I’ve had beer go too far and it was nothing but a let down.

Anyway, if you’re sitting here reading this thinking “I would like to start a cellar… I like fancy beer and think it’d be better if my fancy beer was older than it is now”, I’ve put together a basic guide to starting and maintaining a cellar, to help answer your questions.

Your wants are; cool (10deg celsius is optimal),  stable temperature, and dark.

Simple as that really.

Quick summary of why.

Ideally an underground cave or basement… but in a pinch (because not having your own cave is a pinch), a cardboard box, esky/chilly bin/cooler, chest freezer or an old fridge will do the trick. Better yet, you rig up a temperature controller to the fridge/freezer, set it to 10 degrees (celsius) and you have the perfect setup. Check homebrewer websites for advice on this.

Obviously the beer is the most important part of your cellar. So how do you go about choosing what to put in there?

My biggest rule is: Cellar your beer with a reason.

Have a high abv beer that is a little boozy? Great. Too much spice for your palate? Fantastic. Want the fruit to fade in that kriek and let the sour increase? Stick it in there! Reckon that yeast is dominating the malt a little? You might be able to change that!

Think the beer is fantastic now? Drink it now.

Just curious to see how it ages? That’s also fine. But know that it’s a risk.

I’m not going to break it down into styles as I think it’s best for individuals to think about.

Hops are a preservative. Their aroma and flavour, however, does not keep well. Hops are the first thing to die off, so try and drink them fresh.

There are some exceptions – American Barleywines for example are typically highly hopped.

In combination with their rich malt profile and high abv, there is every reason to drink both fresh and aged. Typically these are good options for comparative vertical tastings (tasting a number of years at once).

Personally I quite like Black IPAs with a bit of age on them too. I’ve had ones a year old that are magnificent. The hops die off but the malt profile of a BIPA helps it evolve into something new.

Conversely a regular IPA doesn’t usually have a malt bill that stands to age. The malt bill is more straightforward to let the hops shine through. Age will intensify the simple malt, while weakening the hops. Usually this will end up tasting like dull, caramel water (slight exaggeration, but put an IPA away for a year and try it for yourself)

Rule three:  Don’t buy too many

You have a hobby and you want to indulge it. Great! I’m the same.  But if you have 100 bottles of beer cellaring, then that’s almost two a week for a year. Are you drinking that many special beers?

If you aren’t, but are buying beer on a weekly basis, pretty soon you are going to have an unmanageable mass of beers. And far too many are going to go old, stale and you’ve just wasted your cash. 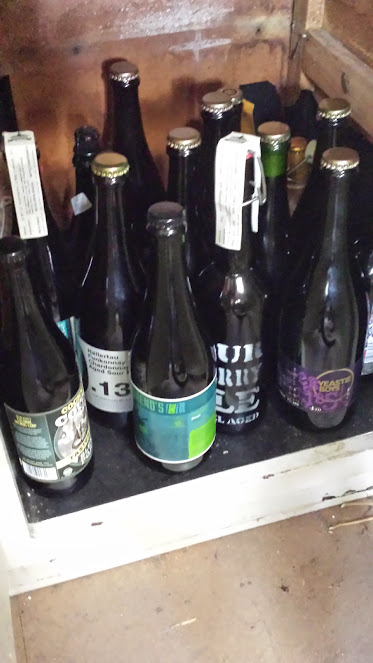 So you have a nice cave, box, or cupboard. You have some great beers that you are excited to try in a years time. Maybe 10 years time.

How do you keep track of them?

There are some websites out there that help you do this. I’ve never used any so won’t comment, but here is a link to a basic template which is what I use and just update as I go.

Being on Google Drive means I can check from my phone when I’m out and about shopping or trading/organising bottle shares.

On the side, or standing up? To be honest, there hasn’t been any real research either way. Popular wisdom says side for corks, up for regular crowns. This is generally what I go by also.

If there is compelling research for one or ‘t’other, I’m yet to see it.

Modern crown seals are lined so they shouldn’t be imparting off flavours into a beer, but I still don’t like the idea of the liquid so close to the mouth of the bottle. That isn’t backed up by anything other than my own worry though.

The oldest beer I’ve been in the same room as was a 1920(ish) Liefmans Goudenband. It was corked and stored on it’s side. Generally on things beer, I trust the Belgians.

There is an argument about the yeast cake settling on the bottom vs the side and how that might negatively impact the beer. I’ve seen debates about whether or not this is a problem. But being part of bottleshares and ending up with a small taster of only yeast from the last pour, I would want it sitting at the bottom to lessen the risk.

Because of that, I’ll let any corked beers sit upright for as long as I can before I drink them. If you know you’re cracking that Cantillon on the weekend, then no harm it moving it upright first.

Deciding when to finally drink?

There is no hard and fast rule. The best way to know is by trying beer at different ages and seeing. The best way to do that is to start a cellar (I know a great guide!). I try not to push things out past 4 or 5 years and that’s usually only reserved for lambics and very high abv beers.

But it all comes down to preference, what the beer actually is and what you want to achieve. If you aren’t sure, then drink sooner rather than later.

I subscribe to the school of thought that is:

A special beer is ocassion enough on it’s own.

(I’m paraphrasing that from something else. I forget what but I know it’s not my own idea)

It can be a real treat to dip into your cellar and really enjoy something you’ve been saving up. On the flipside, it’s also great to share that treat with like-minded beer lovers at a bottleshare. It’s really up to you.

You can also read my recent post about two beers that were almost 30 years old. I obviously discuss this topic a little also.