A while back I visited Blenheim and said Moa and their marketing could “go jump in a lake”. Somehow their marketing is now dumber than it was back then (look up stories about their IPO prospectus for more info – I don’t need to rehash what has been already said.

I did like the beer though and I still think they, as a whole, make a quality range.

That unpleasant and mostly offensive cherry wheat beer. My face involuntarily grimaces at the thought of it.

However after a chat with one of their sales reps and a manager of one of Melbourne’s premier beer bars, we decided I might enjoy it with a bit of age, rather than brewery fresh.

Being the fair and impartial guy I am, I figured it was worth a shot – oh and also their rep gave me some samples for the purposes of reassessment. I know I’ve said in the past that I don’t take beer for the purpose of review only but in this case I think it is fair to make an exception as I think it’s an interesting experiment.

Here are my comments from the first time around… in hindsight slightly harsh:

I also tried their much hyped and marketed ‘Breakfast Beer’. The beer that got them all over the news in New Zealand. Oh boy, it. is. shit. What a rubbish beer. It just tasted like cherry extract and watery beer. Not a pleasant experience at all. It has a decent score on ratebeer and positive comments around the internet, and usually I would say ‘well you might like it because of  blah’ but in this case, if you like it, you are horribly wrong.  It was a real mess. I may be willing to concede that it may have been too fresh and could have done with some age behind it to mellow the harsh extract taste, but I can only judge what they served me.

Would the beer change and develop enough with some time to be in any way palatable?

This is a 5.5% cherry wheat beer which is made to be a refreshing summer alternative to champagne for those special occasions. Summer time breakfast, new years bbq, all that kinda thing.

Made by Moa in NZ – as mentioned – a brand now famous for their controversial marketing. More-so than their beer.

I gave this beer about 6 months out of the fridge and 1 month in the fridge. I can’t imagine much more would be beneficial. 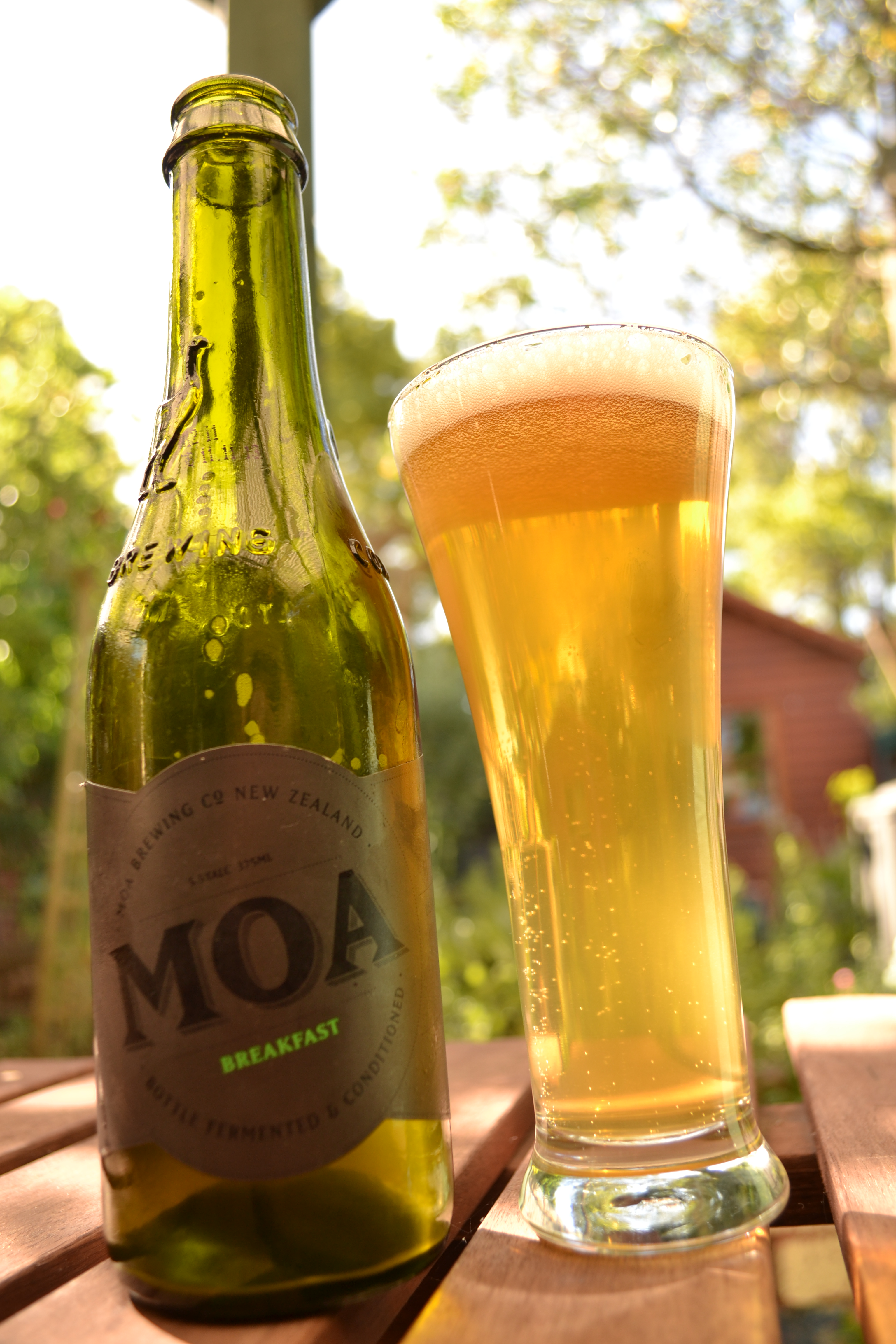 Even when the yeast was swirled from the bottom of the bottle it only resulted in a slight cloud but before that everything was a crystal deep gold, which is probably indicative of the length it spent in my fridge. The decent clear white head held solidly, as you would expect from a wheat beer.

How does it smell and taste?

Smells more pleasant than I remember with the yeast giving a slight banana boost to the fragrant cherry. My previous experience was soapy cherry extract but this is more subtle the second time around and definitely indicates some maturing and mellowing with age.

Initially it tasted pretty decent and refreshing and again the banana and clove qualities from the yeast are more present than last time but they are, unsurprisingly, dominated by the fragrant cherry.

The whole experience is definitely more enjoyable the second time round but soon the cherry becomes tiring on the palate and a bit of  bitterness at the end seems to be increased by the cherry and yeast and I’m left with a long soapy bitter unpleasant aftertaste with nothing to temper it.

At breakfast with some salty thick cut bacon or a fresh summer fruit platter might be just what this needs to reign the beer in and take care of the overwhelming and unpleasant long aftertaste from which I can’t seem to hide. 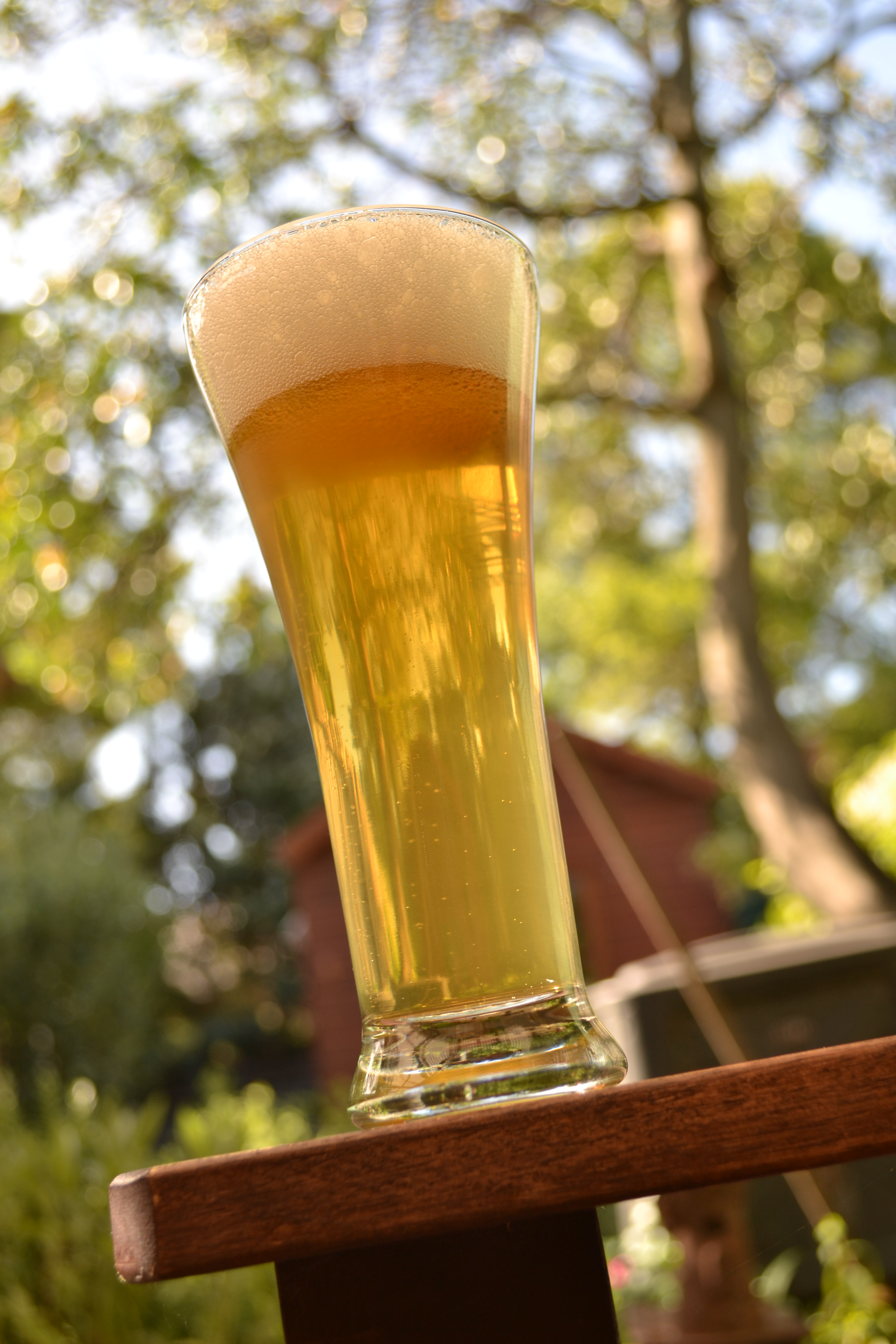 While the experience overall is better, this beer is still a long way from being something I enjoy or think is a good. Instead it seems just muddled. Nothing about it leaves me wanting more. The fact that I’m struggling to finish it after a hot, bike ride after work on a windy day probably says it all.

While I understand some have a taste for this and enjoy it, I would be surprised if anyone could have more than one as it just gets increasingly soapy. However reading reviews on Ratebeer, again I am in the minority: http://www.ratebeer.com/beer/moa-breakfast/1

From Tasmanian beer writer Willie Simpson, I’m told I shouldn’t like this beer, which is a raspberry wheat, but I really do. It is crisp enough to really go down a treat on a stinking hot day and has lovely high carbonation to make it nice and lively and refreshing.

Another fruit beer that allegedly uses apricots but is shrouded in mystery. A few on a hot summers day really goes down a treat. Currently it is being imported exclusively to Dan Murphy’s so it’s available if you’re in a town or city without a decent bottle store. While I don’t advocate shopping at major chains who tie-up exclusive rights, I do advocate more people trying interesting and different beer.

Probably my favourite non-soured fruit beer, this comes out of New Zealand also and is a lovely rich, refreshing and smooth boysenbeery wheat beer. From the first beer of the session to desert, this beer is a winner for just about every occasion  Pair it with game meat, or a rich chocolate mousse and It will stand up proud.  Currently unavailable in Australia I’m told we should be seeing their beers on the shelves again soon.