It’s Your Move – A Vaporwave Brand from CUB?

If there’s two things I love, it’s putting a magnifying glass to the big brewers social media accounts, and the weird and wonderful world of Vaporwave music. It’s rare that those things collide so it’s great to be able to write this.

It didn’t take too much research to discover the website is owned by CUB (Australia’s largest brewer, which is in the process of being sold from AB InBev to Asahi), and the only person so far to appear in a photo on its Instagram is a social media manager for CUB (according to his Facebook profile). Which is funny in itself, given the post that he likely typed himself finished with “Good job Jordan. You’re doing the best you can”. We have to admire someone with positive self talk in 2020. We could all learn a lot from Jordan.

It’s doing a thing where it’s giving away secondhand couches, one of which was allegedly found in Carlton, but had already been posted a week earlier in Brunswick. Giving away couches that you “found” is pretty gross but I get the idea of marketing the beer as an low-rent anti-brand thing for the youth. Carting that couch to different suburbs for an Instagram post though, that just seems like far too much work for limited pay off.

The brand positioning, as a Vaporwave/low rent proposition is where it gets really interesting to me.  It’s not the first time a big brand has dressed down for marketing purposes but in this instance it lets me talk a bit about Vaporwave, which is really why we are here. I’m not claiming to be an expert on the genre, and all its micro-genres, but I do enjoy it, so let’s go.

Firstly the branding isn’t blatantly “Vaporwave” but definitely has the stripped-back anti-design that Vaprowave has inspired over the years. It inspires a lot of the graphics on this site. It’s also very similar to the branding of the Brunswick Music Festival over the past two years. Example: 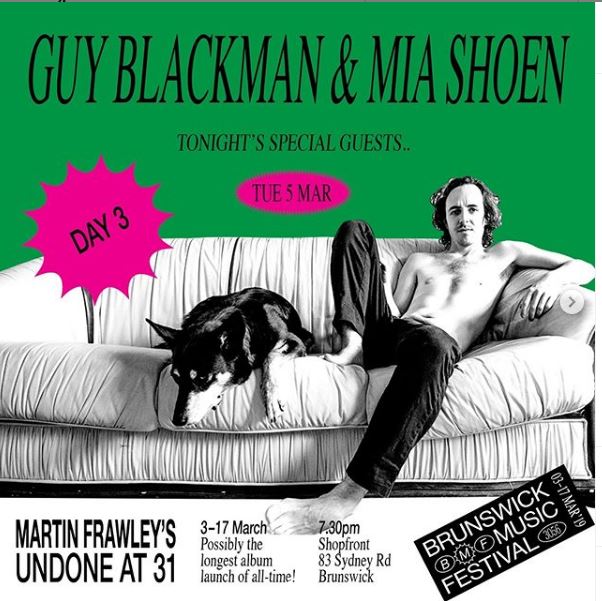 Vapowave came out of the late 00s, where “Chillwave” electronic music was taking off on Tumblr and music blogs. From that early social media world we got albums like Far Side Virtual and Eccojams. Both quite different but are essential building blocks for the genre. Eccojams is more slowed down, warped samples, while Far Side Virtual is all about 90s computer sounds clicking along musically (and maybe at times, not so musically). Nostalgia for early computer graphics and corporate logos is plastered all over.

Then  came the landmark Vaporwave tune from the Macintosh Plus album, Floral Shoppe. You can think of the album cover and the song リサフランク420 / 現代のコンピュ to Vaporwave as Smells Like Teen Spirit and the Nevermind cover are to 90s alternative rock. There is nothing more iconic in the Vaporwave world.

Take a listen. Also note the colours on the cover are similar as Pigeon Lager, just a touch more neon.

Smooth tune. Good vibes. The sample is It’s Your Move by Diana Ross and the slowed and warped 80s song is now a hallmark of the genre. Another great example is Nmesh – Dream Sequins, which uses the Sophie B Hawkins classic Damn I Wish I Was Your Lover.

If you’ve taken a look and a listen, you’ve probably got a bit of an idea of what Vaporwave is. The package of visual and sound is referred to as “aesthetic” (or more officially: a e s t h e t i c). The fact Pigeon has used the term in its social media already, shows it is undeniably a Vaporwave-inspired brand. And here is where it gets difficult for any brand trying to do this. There are no doubt a few of you wondering “is this Vaporwave thing all a joke?” and the answer is “Yeah, sorta? But also it is very serious”. It’s also just as anti-corporate as it is pro-corporate. It explores a niche that celebrates corporate culture while making a point of its own inaccessibility. People have written much about Vaporwave, a lot of it far more pretentious than what I just said (but still valid. Pretentious isn’t bad especially in this space). For example:

“is [Vaporwave] a critique of capitalism or a capitulation to it? Both and neither. These musicians can be read as sarcastic anti-capitalists revealing the lies and slippages of modern techno-culture and its representations, or as its willing facilitators”

“[T]here’s nothing intrinsic in this music, here or elsewhere, that leads to a defined listener response. It’s the total experience — the conflicted listens, the negotiation of taste, the perceptual confusion — that’s noteworthy, an outward extension that, when coupled with its overall aesthetic approach, makes it impossible not to read politically. I mean, is this stuff a critique of capitalism? Is it a way of expressing the shortcomings of technology? Is it an attempt to reclaim the spaces in which this otherwise insufferable music is normally played? Maybe. Maybe not. Probably. Who knows.”

Perpetual confusion, conflicted listens, slippages of modern techno-culture. All wonderful things for artistic endeavours, but maybe less so for a big-brand lager.

Vaporwave has also spawned sub-genres like the definitely-a-joke-but-also-kinda-good Simpsonswave. If you’ve been playing along, you’ll recognise this. And being the era we live in now, it’s spawned its own fascist spinoff, championed by neo-nazis and alt-right hate figures, known as Fashwave.

CUB aren’t the first to use Vaporwave as a branding angle, and it won’t be the last, and I’m not saying what they are doing is bad or wrong. I sincerely wish anyone trying to use it as a brand identity the best of luck for the reasons outlined above.

As I was concluding this piece, another CUB brand was bought to my attention, launched at the same time with similar vibes but in a more “young and woke” approach. It seems to be only in Perth and is already treading a pretty dangerous line between “actually good messages for good people” and “these are jokes your racist uncle would say sarcastically”: 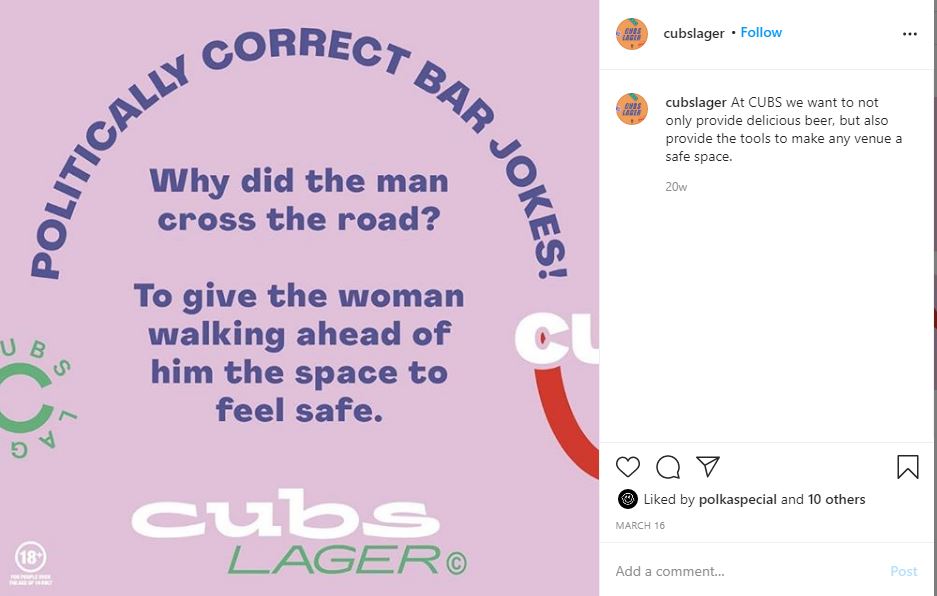 Using jokes with the term “safe space” and “politically correct” is always a minefield even though I’m sure the intentions are good. It says they provide the tools to make any venue a safe space, but it’s not clear from this what those tools are. They also look to be pitching this into the LGTBQI+ space, which gives the name “CUBS Lager” an interesting double meaning.

I’m not sure if any of it is going to stick as a long term brand offering. Chances are both will die off and we’ll never hear from them again. For now at least, it seems CUB are trying to do something different, and I guess that’s all we can ask for right now.

Good job, Luke. You’re doing the best you can.