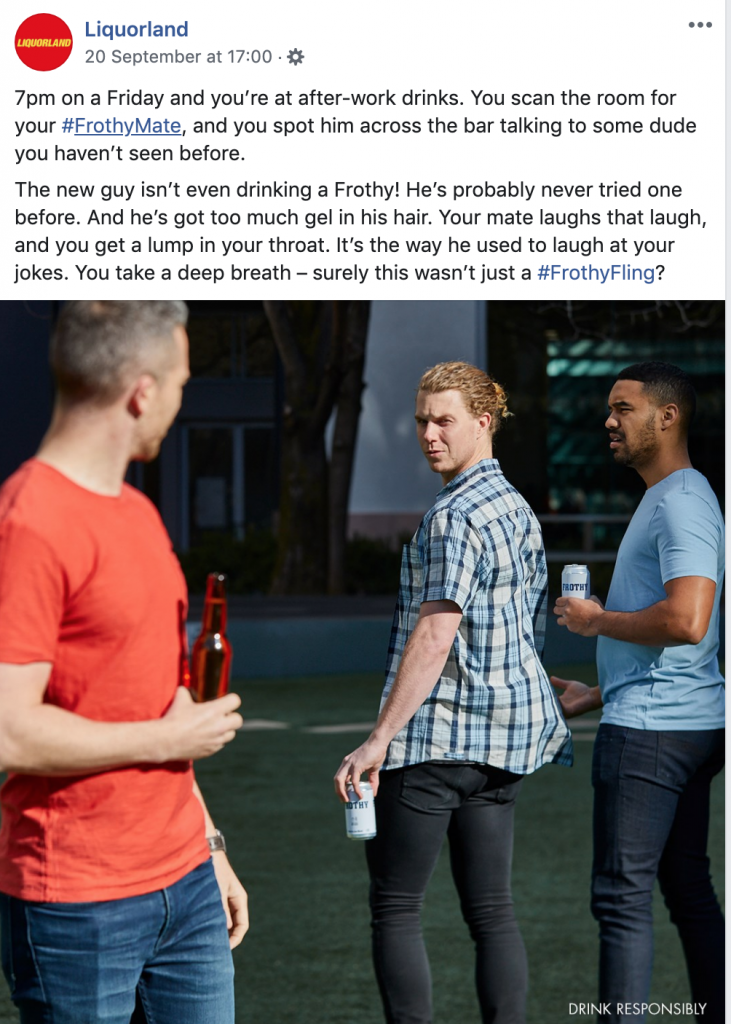 In the world of this meme, there are two male friends, potentially co-workers, out for a drink.

It says “after work drinks” but it doesn’t say it’s a company function. So it’s either two mates from separate companies meeting up for a drink, or two employees who see themselves as work friends. In either scenario, as evidenced by the hashtag (#FrothyMates) it is established that the pair share one thing in common: enjoying the Matilda Bay beer Frothy.

What is not established, is even though the protagonist thinks the pair have a “#FrothyMate” relationship complete with cutesy nickname, he may be the only one aware of this. Maybe he’s workshopping it to bust out at the right moment:

“Hey Steve, you think maybe, because we like Frothy so much we could start referring to each other… now stay with me, it might sound a little corny… you’re gonna laugh but I think this has legs… we could start calling each other ‘hashtag Frothy Mate'”.

On the other hand, it is possible that it was entirely organic.

Then the next week the hashtag pops up into an email: “You ready for a beer, #FrothyMate”. I think we can all agree, this is by far the most normal scenario, and for the sake of all parties, I hope that is the case, but I also think this is the least likely. What I think is the most likely, is that both parties are aware of #FrothyMate, but it is being entirely driven by one side. The second party goes along with it, because saying “hey buddy, can you not make it so fucking weird that we sometimes drink the same beer after work?” is a fast way to create office tension. Now, this might seem like I’m making big leaps of assumption here, but let’s look again at what is running through the narrator’s mind as he spies his friend talking to someone else.

“The new guy isn’t even drinking a Frothy! He’s probably never tried one before. And he’s got too much gel in his hair.”

Too much gel in his hair? The only reason to ever let the amount of gel in someone’s hair irk you is a desire to find any fault you can, so you lash out in your mind. The worrying thing is: where does a phrase like that lead if you are already taking deep breaths, and are emotional to the point of a “lump in your throat”. At this point it doesn’t seem like a big stretch that he’s going to go over and awkwardly siddle into the chat before vocalising his opinion of the gel.  The thought is already in his head. He’s likely had three or four beers by this point (it’s 7pm after all). This scenario is a few moments away from punches, tears, and ripped shirts.

If they are indeed coworkers, then Monday is going to be heaps awkward. It’ll be the end of #FrothyMates” and potentially the start of office white-anting, stalking, and one of the parties either resigning or being asked to leave.

Even if you think that is all ridiculous to even consider, you have to at least agree that “#FrothyFling” should have never ever been typed out. Ever.

Now, at this point you may think I am overthinking this. “It’s a meme on Facebook, don’t worry about it.” However let’s step back and ponder how this all came about. For a start they have gone to the trouble of taking a photo specifically for this post. So if they are doing a photo shoot, then chances are they are using models. And you don’t just create these things on a whim. Someone probably pitched this idea to their boss – maybe it’s a third party marketing company, which then had to be signed off by both the marketing company and Liquorland marketing team. Multiple people in different departments would have signed off on this. Multiple. People.

Liquorland also don’t own Frothy. It’s a CUB product. I assume that by creating this meme, they also would have engaged CUB on some level as a courtesy. You wouldn’t want to get this wrong and piss off a major supplier would you?

Or would you? More on that in a second.

So while you may still think I’m overthinking this, really the hour or so I’ll spend on this post is nothing in comparison to what went in to creating this post. It went through multiple hands, was workshopped from concept to execution, and people were paid to be involved. Spending an hour ripping on its many flaws is really not enough time… but that jigsaw sky isn’t going to piece itself together now, is it.

Some readers may know that I also do a podcast about conspiracies, making me uniquely qualified to speculate on potential nefarious intentions for this meme.

While Liquorland don’t own Frothy, its parent company (Coles Group) do have a number of competing brands. One in particular is called “Tinnies”. Very similar areas to “Frothy”. Middling beers, created by marketers to combat the rise of “Furphy”, the Lion owned beer that plays in the same space but a lot more successfully.

What this meme does is hit a lot of buttons for blokes on Facebook to jump into some good old fashioned homophobia, or at the least implying Frothy drinkers are effeminate and not real blokes.

Gazing across the bar at a male friend talking to another male friend, gel, flings, lumps in throats. The distracted one has his hair tied back (it’s not in a man bun, but many commenters want to claim otherwise), and that’s without even mentioning how tight his pants are (take another look… there’s a whole situation there that is very unnecessary). Normally I wouldn’t comment or even think on each in isolation but together it’s a cocktail of red flags for dead shits posting dead shit things. Some examples:

“Either your marketing team are geniuses or you are trying to alienate the working man from your little”frothy moments”. Regardless still a very ordinary beer.”

“Look, if this blokes in love with his mate he should just tell him.”

“Haha.. you have mates with hair buns… that tells a little more about you”

“And people wonder where the real men went, this ad makes blokes sound like a bunch of latte sipping @!$#%&”

“Scratch His eyes out pull.his hair Spit (or worse) in his.FROTHY. Write RUDE UNTRUE things on (CENSORED) facebook.That will fix him. (things like He LIKES GIRLS etc)” (I crept on this dudes account and it was a horror show of racist and transphobic posts).

“That’s offensive! Not all Frothy drinkers wear their sisters jeans!”

Given Frothy’s target market is “blokes” (I’m making an assumption here but you don’t create a beer called “Frothy” to appeal to the female market. Or at the very least, blokes are 50% of the intended market) the only reason that any company would put this ad out is to undermine the product (Frothy), and make their own product (Tinnies) seem cooler by elimination. There is no other logical conclusion as to why this was ever created. You don’t create a hair gel, gay-cloaked-straight joke, tight jeans, man bun, lump in throat, #frothyfling meme and throw it to the lions in the Facebook colosseum and expect people to react favourably (admittedly there were a couple of people who did comment sharing their delight with the ad, but they are clearly psychopaths).
While it may not be a conspiracy, and I might be (definitely) overthinking it. It’s still a weird damn ad, no matter how you look at it.
As I completed this post, I turned to see our cat, Pickle, asleep in the jigsaw box. Which is great, so here’s a photo of that: 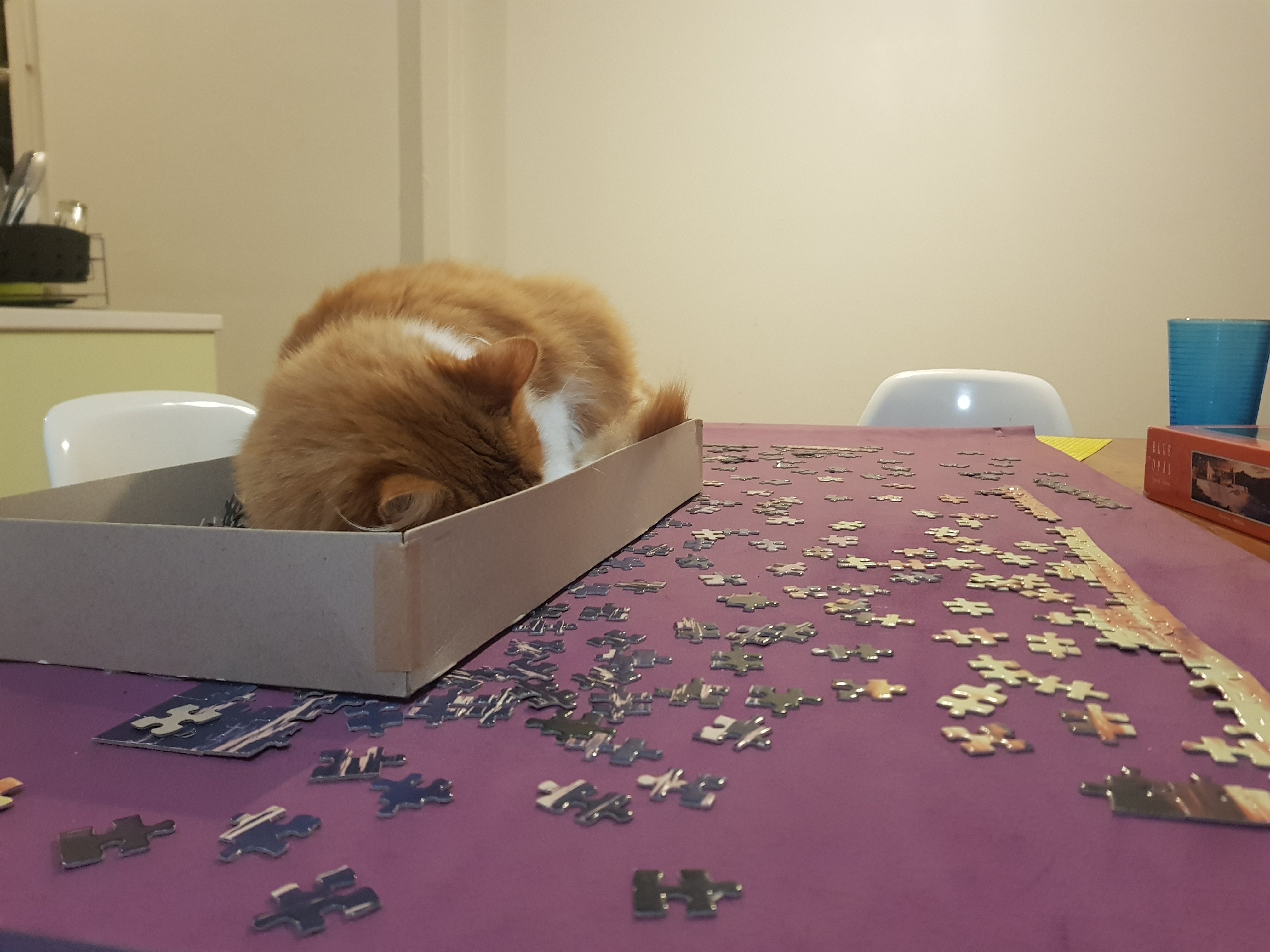