Us beer dorks love lining up the latest mainstream media article about beer and picking out all the mistakes. Throwing schadenfreude at any minor slights while we all snicker on social media.

While beer nerd culture is full of infighting and opinionated weasels, the one thing that unites us is dodgy coverage from big media. 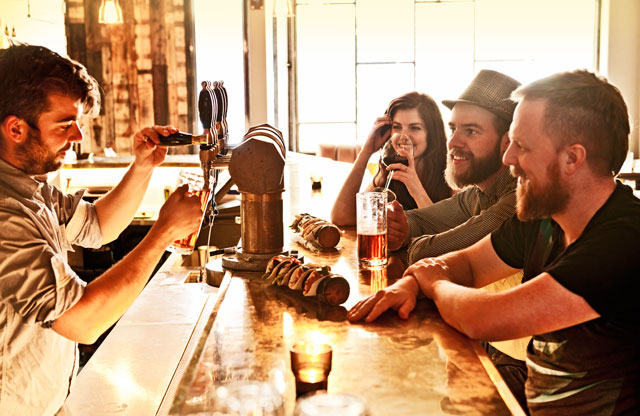 And honestly I thought I’d seen it all. People calling lagers “ales”, people calling beers “brews”, the word “microbrewer” being used in 2016. TWENTY SIXTEEN. And don’t even get me started on the story of IPA.

And then I saw this photo. It was part of an article in the Listener (A pretentious NZ TV Guide that thinks it’s the New Yorker or something) about Kiwi beers kicking goals overseas.

Here it is again in case you missed it:

It’s all there. Dudes with beards (three of them!) One is in a tshirt like a massive fucking cliche, and the other is wearing some sort of hipster hat. What is that? A trilby? Get the fuck out mainstream media. We don’t even wear trilby’s. And of course. OF COURSE the lady is drinking wine. Because we all know vaginas can’t handle a bit of the old malt goodness. Look at her, smiling and enjoying the wine like the big dumb stereotype she is.

But that isn’t even what irks me so much about this photo. It’s not even the fact that ol’ mate on the end here has managed to pound his beer before his cohorts are even half way through – he’s the guy in the tshirt you see, so he’s definitely a harder drinker than the Trilby Terror and Little Miss Red Wine. It’s not even the fact that you just know the barman is smugly telling them how dope these new hops are when they clearly already know. And it’s not that he has the nozzle of the tap right in the fucking beer like it’s his first time behind the bar. Is he on work experience? Hahaha probably. Nor is it the fact that it Michael Bay is filming a massive golden-hour explosion right outside and no one seems to give a shit.

The main issue with this photo – that is really getting my fucking goat – are those godamned tacos.

Why in Christ’s name is no one even reaching for or considering those delicious looking tacos in their bespoke little beds. Crammed full of pulled pork or brisket or something like that. THEY ARE GOING COLD YOU SMUG HIPSTER FUCKS.

Is this what mainstream media thinks of us? That we just sit there chuckling away about the hottest new intoxicating amber nectars and barley sodas while we let our tacos go cold. They don’t even have napkins or delicious hot sauce or lime or anything. Not one fucking condiment.

ARE WE JUST SAVAGES TO YOU?

Tags: I'm not even sure who I'm making fun of hereThe Trilby Terror