As Australian beer tries to forge its own identity in the modern world, there isn’t much written about the identity of times past. Outside of business machinations and buyouts it’s hard to really know what Australian beers may have tasted like throughout history.

Fortunately renowned homebrewer Peter Symons has taken on the challenge and done the research for his new book “Bronzed Brews”, which combines history and recipes to give a unique insight into Australian beer in times past.

One interesting story below is how he went about researching the beers from Tooth & Co., and how Bill Taylor  – former Chief Brewer at Lion – and Chuck Hahn – Australian brewing icon also in the employ of Lion – assisted in tracking down the original recipes. It makes you wonder about recent “attempts” by CUB at recreating the Tooth Pale Ale... I’ll leave you to draw your own conclusions from that.

You can find order the book through the site here. 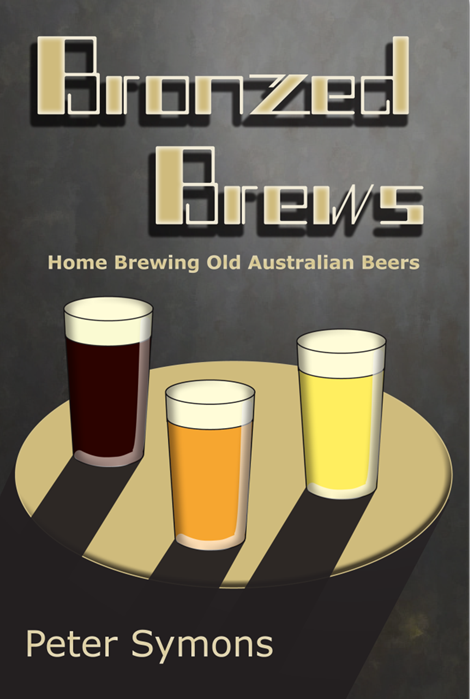 As a bit of background can you tell us a bit about why you got into home brewing and how long you’ve been doing it for?

In the late 1990s I wanted to drink beers that were not commercially available in Australia such as Extra Special Bitter. I have been home brewing since 1998, firstly from cans, then partial mashing, and then full mashing. I like that I have full control over ingredient selection and also the mashing process with my custom built programmable PID based HERMS system, this plus having a temperature controlled fridge for fermentation means that I can brew a wide range of beers. Of course, there is nothing like having a hobby that produces beer.

What sparked your interest in writing the book?

Well, way back in January 2009, after doing some very rapid initial research for the Australian Sparkling Pale Ale style for Jamil Zainasheff on the Brewing with Style show on The Brewing Network, I wondered why there was so little written about historical Australian beer.

That along with being a long time reader of Ron Pattinson’s Shut Up About Barclay Perkins blog, which has Lets Brew Wednesday historic beer recipes, whetted my appetite to investigate the situation in Australia.

There are plenty of brewing histories typically covering the founding of the brewery, acquisition of rival breweries, eventually being taken over by a larger predator, with the closure of the founding brewery (sooner or later), with the consequent loss of the variety of beers being produced.

These histories usually have lots of stuff about people, dynasties, and stories a plenty describing contemporary events. If you are lucky there are some architectural details about the brewery and perhaps a description of the plant but usually nothing of significance about the actual beer being produced such as types, flavours, colour, taste etc.

My book has taken a brewing centric approach rather than being a history of breweries per se. While I have included historical context, mainly contemporary brewery descriptions, adverts and illustrations from newspapers, my overall aim has been to recreate the recipes as accurately as possible, by using primary sources i.e. brewing records.

How and where did you source the recipes?

In essence I tried to utilise all of my work travel opportunities to visit libraries and archives around Australia and the U.K.

Tracking down the primary sources was a challenge. Think of it as a voyage of discovery where you have a general idea of what detail you want to acquire; actual brewing records and details of processes but the information is often classified by librarians and archivists in very vague and broad terms.

So after a lot of Googling, I made a productive start by contacting Charles Pickett of the Powerhouse Museum in Sydney and in April 2011 he facilitated access to the earliest Australian recipe log I have found to date for Tooths 1844 XXX and Porter. Next on a work visit to Canberra, in early 2012, I took the opportunity to visit the Australian National University Noel Butlin Archive to delve into the Tooth & Co archives, plus I visited the Australian National Library to look at brewing texts and the Australian Brewers Journal, and I also reviewed copies held at the State Library of Victoria and the State Library of NSW (SLNSW).

Then in Nov 2012 due to a lack of funding my day job contract was cancelled, so I had a bit of a sabbatical and decided that I would intensify my researching activities.

I found out about Special Collections at the SLNSW, notably a series of Tooheys Goods to Arrive books from the early 20th century, which were accounting related BUT included types, and origin of ingredients and purchases of plant. To access this material you have to hold a special Gold Card – and sit in a roped off area, that has rules such as weighing the books out and back in! Archives and libraries tend to be quirky places – all have slightly different rules about how you access the materials – white gloves, book rests, time of access, photographic permits etc.

Then it was back to Canberra in December 2012, where I spent 3 more days in the Noel Butlin archive again to go through even more boxes, and the thing with getting a box you never know exactly what has been placed in the box so all sorts of unexpected information pops up.

Then in early 2013 I met with Chuck Hahn who along with Bill Taylor facilitated access for me to the Tooheys archive at the Auburn Brewery for 4 days worth of mouldy brewing book sorting that provided a range of primary records from 1913 to 1978, which helped complement the Tooth’s information from the Noel Butlin archive.

I must also mention the invaluable resource that is Trove http://trove.nla.gov.au/ I spent many evenings tracing; brewery descriptions, adverts, and people to complement the recipes.

What was the most interesting thing you found along the way? Any strange ingredients or processes?

However the availability of bottled lager from the 1920s seems to have hastened the demise of Pale Ale.

Globally some historic styles have been revived in recent years, do you think there is potential for any recipes or techniques you’ve found to find their way into commercial brewing?

I would really like to drink an Extra Stout with some Brettanomyces in the finish. Hopefully someone out there will oblige.

As to ingredients one of the most important factors in recreating a beer is to use the right yeast. White Labs, thanks to Chris White, at my instigation sourced Melbourne No.1 Ale yeast, from the National Collection of Yeast Cultures (NCYC), in the U.K. http://www.ncyc.co.uk/ and have made it available through the Yeast Vault, https://www.whitelabs.com/yeast-vault which allows (currently US home brewers) to vote for the strains that should enter production, WLP059 Melbourne Ale is on the list, so hopefully enough US home brewers will vote for it so that it would then become available to Australian home brewers.

Bronzed Brews details many early 20th century Tooth and Co. ale and stout recipes and it is highly likely that Tooth’s used Melbourne No. 1 yeast. It would be very interesting to see some contemporary beers fermented with this yeast and see what flavours eventuate.

You’ve talked about Coopers style ales on the Jamil Show, and you touched on beers such as Stone and Wood being quite different. People often draw a direct lineage from Coopers to S&W, do you think that’s accurate?

No, for me Coopers Sparkling Ale is a legacy beer trapped in time, its use of Pride of Ringwood hops makes it a relatively recent beer as Pride of Ringwood was released in the mid-1960s. I think that Stone and Wood Pacific Ale has more in common with a Coopers Pale (Green Label) being unfiltered etc.

From my research I think that there is more similarity to a typical Pale Ale from 100 years ago with say a Bridge Road Brewers Beechworth Pale Ale where a blend of local and US hops are used.

Does a true Australian Sparkling Ale exist commercially outside of Coopers?

What’s the state of modern home brewing in Australia? Do you think it’s in a healthy place right now?

Really good, the availability of 1 Vessel brewing systems such as The Grainfather means that more people are going all grain. This plus the support of local brew clubs for example, Extra Special Brewers, my club, means that there is plenty of practical support around for newer entrants to the hobby.

Then to gauge how well your beer has been brewed there are plenty of beer competitions around, plus qualifying rounds held in all states for the National Home Brew Competition that will be held in conjunction with ANHC2016 in Adelaide in October.  http://www.anhc.com.au/index.php/latest-news