If there is one thing even the most jaded beer lovers can agree on, it’s that we absolutely need more education and people giving the right information to drinkers.

llington (NZ), the Craft Beer College has been set up and running for a couple of years now. I spoke to co-founder Steph Coutts to get some insight into what they do and why they do it.

You can find their website with all tasting and booking details here: http://www.craftbeercollege.co.nz/.

What is Craft Beer College?

We’re basically a beer tasting and tour company.  We run all sorts of beer tastings and tours for all sorts of people – the public, work groups and social groups, tourists and the like.  People can book into one of our public tastings or contact us to set up a private tasting to suit their needs – we’re pretty flexible and all about spreading the word about good beer while having fun.  We cram a lot of information into our tastings but people don’t necessarily realise that they’re learning things.  At minimum, we want them to learn that beer is crazy diverse and delicious, and what they do and don’t like.

When did you launch?

It must have been in 2012 but, we can’t remember – isn’t that terrible!  It seems like Craft Beer College has been part of the Wellington beer scene for a while, but we adopted our name from our great friends at the Great Australasian Beer Spectapular. We thought it was a great play on words to express the educational part of our purpose.  We really like their festival and the educational seminars they run.

Why did you launch?

We were friends with Hashigo Zake – the bar where we run most of our tastings.  Along with the Malthouse, they offered a selection of beer unlike anything Wellington had ever seen before.  We were watching people walk in and have no idea what they wanted to order!  There seemed like a gap in the market, telling people that liked good beer a bit more about it, so they could understand what made is more aromatic, flavoursome, delicious.  And so they could understand the long history of beer – “craft” is not a new thing – it’s actually a really, really old thing.  Beer was craft before it was massed produced and mainstream. 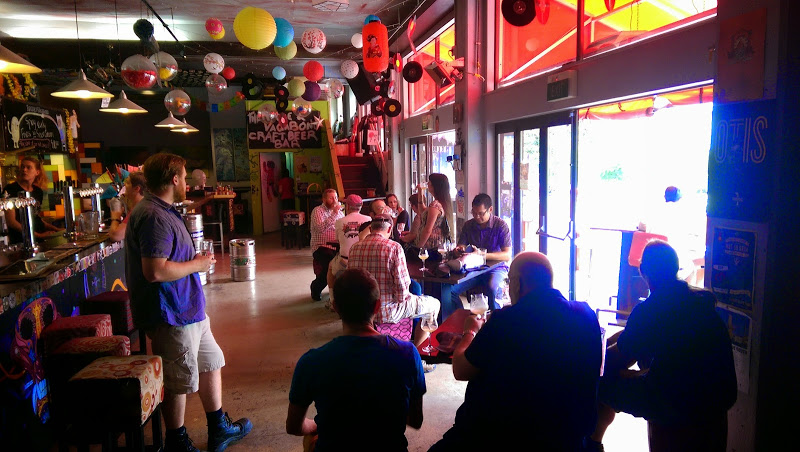 One of their hosts, Phil Cook, sharing the good beer love (Photo: Supplied)

What changes have you seen attendees since you began?

In the beginning, it was beer geeks – people who were already interested in good beer.  Now, the beer scene in Wellington has exploded.  Good beer is just about everywhere and we have just about anyone coming to our tastings.  We have people who have been drinking good beer for ages, and want to learn more.  We also have people new to beer who are up for trying things different. Men, women, younger, older – it’s pretty clear to us that beer doesn’t discriminate.  We don’t beer with our genitalia!

Tell us about the most fun tasting you’ve hosted or been part of?

Wow – it’s so hard to answer this question.  The most fun we have is when we really excited or amaze people.  We had one tasting were two young men almost cried because they were so shocked by the Yeastie Boys Rex Attitude.  They just couldn’t comprehend it!  But, what do you have after it?  To cleanse the palate? We offered them a sour beer – I think they really did cry then.  And, I am not sure they ever came to another tasting.  Ironically, there was a guy with his kid at this tastings – it was a beer and food tasting and the kid was eating, and having small sips of all the beer. He didn’t mind the Rex Attitude at all!  It pays never to judge a person’s taste!

Have you ever had someone completely anti-beer that you’ve been able to turnaround? Can you tell me the beer(s) that did/do it?

Many! And, you know, as long as they come to a tasting with a great attitude, and give things a try – that’s fine.  Not everyone has to love beer and not everyone has to love all the beer we love. But, we often find that those people who are less certain about beer, or really don’t like it have had bad experiences with mainstream lager. Once you give them something different, they often change their minds.  We had one person just like this – she came to the tasting with friends to have fun and declared she didn’t like beer but she’d try it all. The very first beer we gave her got a response of, “oh, I like this beer”. The next was “I really like this beer”!  They were Emerson’s pilsner and the Mussel Inn Captain Cooker. By the end, she said, “I like beer, just not cheap lager”! And, she tweeted us to tell us about buying some Rodenbach for a dinner party!
Men, women, younger, older – it’s pretty clear to us that beer doesn’t discriminate.  We don’t beer with our genitalia!

What does your dream tasting comprise of?

Primarily, great people in a great place! It is so hard to choose a favourite set of beers as often it is situational, and dependent on the time of day, and the weather and all those things. But, while we’re beer geeks at Craft Beer College, We’d hate to be thought of as beer snobs. All of us drink a diverse range of beers from breweries around the world. If you’re stuck at a work party – a Steinlager is a great, flavoursome lager. If you’re at the Malthouse in Wellington, you’re bound to find some amazing Belgian sour in the fridge! At Hashigo Zake – where we spend a lot of time – there is always interesting, fresh US beer to be had.  We’re really spoilt for choice.

Anything else you want to add?

We could wax lyrical  about beer for quite some time! But, really, enjoying good beer is about trial and experimentation – learn what you like and why, then enjoy beers with your family and friends – not by binge drinking a cheap slab but by tasting something that the brewery has put thought and effort into. We’re really lucky to be part of the beer scene in Wellington and New Zealand. And, in Melbourne too where – thanks to the GABS team who we’ve worked for – we’ve been lucky enough thoroughly enjoyed Good Beer Week for a few years and meet some great people – like you! [it’s true, I am great – Luke] Long may it continue!