Second news wrap of the new and improved Ale Of A Time and it’s fading already with predictable takes on beer buyouts, marketing, mainstream news, and a whole bunch of references and allusions that when combined have a venn diagram of one. 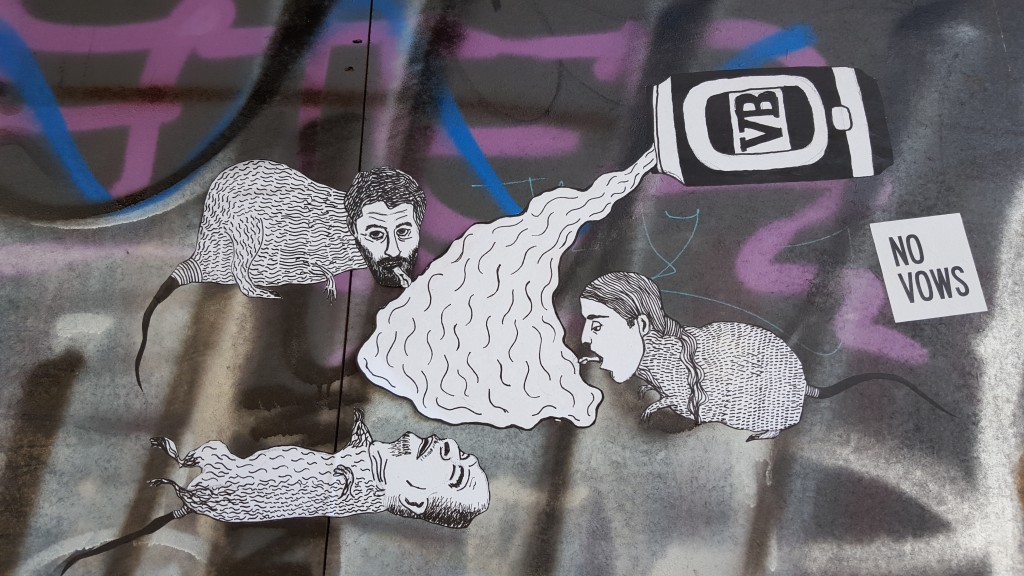 Artist unknown but if you know them I’d love for them to get in touch.

They just kept happening this month. Big beer opening big wallets to take up big shelf space. I’m not going to go through them all but I really enjoyed this read from Roger Protz which has good insight into the changes at Goose Island in the wake of their sale.

Also Brewdog said a bunch of polarising shit. But that’s what they do and I agreed with it because I’m tru punx.

Insiders are predicting more sales to come,  so look forward to the same tired commentary from me and my ilk, repeating the same shit like “well it’s a good thing because consistency and distribution” or “omg the sky is falling everybody panic they are coming for the craft”.

Seriously though, they are and sometimes I feel like Chicken Licken or Henny Penny or whatever regional version you had as a kid.

People keep telling me big brewers are super consistent and I should be thankful for that (I’m not really tbh. If you are getting enthused about “consistency” as a primary trait it’s like admitting you are pumped to see Bob Taylor coming to the crease on the first day of a test. Getting jazzed to settle in and a see strike rate at the giddying heights of 27.10 is not how I want to live my life), but I can’t remember even the most inconsistent breweries using glass as an adjunct.

While commentators still crap on all “bwaahh IPAs are too hoppy to cross over and we need more golden ales”, Stone and Wood turned up and launched their side project that is “lol, all IPAs”. The first offering is really delicious too.

Now go cry about not having enough balance in craft beer.

Hops don’t even matter in beer and there are still way too many hops in craft beers and we need more malts. More malts like this Pilsner and Kolsch.

This guy was actually serious when typing:

Only mainstream brewers, it seems, retain the skills to make more subtle beers where the main role of hops is to provide a pervasive, lingering bitterness completely integrated into a beer’s flavour.

I don’t mean to shit on a journo who is talking about two pretty good beers in a major paper but like… come on. He’s shitting on smaller brewers because they brew beers he doesn’t like. Then goes on to talk about two breweries who have built their reputation on big hop forward beers? Just milking that “too many hops” narrative without any basis in reality. At least find two styles that actualy have a malt focus to illustrate your story. It needn’t be this hard.

Speaking of ridiculous writing, how about the intro from this piece:

HIPSTERS in Sydney may love their craft beers, but they have a long way to go to find the best place to grab a great crafted brew outside of Sydney’s inner suburbs.

I am so confused right now.

I am also glad the story kept that hipster narrative by showing the super craft beer drinking hipsters with the photos too. Look at this smug hipster moustache. Hops and moustaches have gone too far in the hands of hipsters. There. I’ve said it, and I don’t care who reads it.

Also, again, it’s nice they are highlighting good beers in major papers but they should at least look at Hop Hog before trying to describe its appearance.

Two of the hipsters from the last story made an appearance in this one too. Ugh, their smug hipster faces are the worst.  This one begs the question: Wtf is a “regular” beer?

This year the breweries were tasked with the responsibility of adding their beer to the database. You know, the highest profile national beer event of the year, that has direct sales impacts for the winners.

They didn’t though. Way to stay on top of the game. Most are probably added now but I definitely know people wanted to vote for your beers and they weren’t listed. A simple task could result in increased sales may not seem significant at the moment because everyone is selling beer like bananas but again, I’ll be Chicken Licken and tell you the sky is going to fall eventually. Now isn’t the time to get blasé about basic marketing and instead start riding those falling clouds like Goku, or get squashed like Frieze.

Raw Ale Of A Time

While other bloggers sit behind their keyboards typing up excellent “Best Beers for Summer” lists (watch for mine in the coming days), this guy is out there searching for ridiculous Euro farmhouse beers that make zero sense on paper (3 day ferments, no boil) but by all accounts are stupidly good.

I read this story on some trade website and predictably I went full Sarcastro and thought “man they made a tap badge with some stuff” but then clicked through to their website and it is actually pretty neat. I still can’t bring myself to buy one of the beers but they seem to get it.

“It” being “content marketing”, which is already a tired buzzword staring down a 2016 where it fast becomes a twitter joke that will still make “content ninjas” a crapload of money… but when it’s a story of reclaiming wood and nails for a tap badge it’s hard to be a dick about it.

If any brewers want a content ninja to bang out 1000 words about their tap badges, get at me.

Now it’s an art gallery and a brewery doing a beer inspired by paintings which is pretty ridiculous but that’s where we are right now. Saying that, I’m a sucker for a bit of art interpretation (such a renaissaince man) so I enjoyed this quote from Young Henry’s head brewer Sam Fuss.

“It’s a really beautiful painting. We thought that the character in it had a boozy night and was a bit love-struck,”

Fun fact: I’m pretty sure she is responsible for me shotgunning a stale and warm Carlton Draught once. We’re all adults here so I can admit that sometimes even us beer elite make irresponsible decisions.

People have been too busy launching the hottest of hot takes about Fosters not being a very good beer to miss the comment on this story. Get your medical marijuana game sorted and stop worrying about ridiculous lawsuits. Modern life is about priorities and yours are askew.