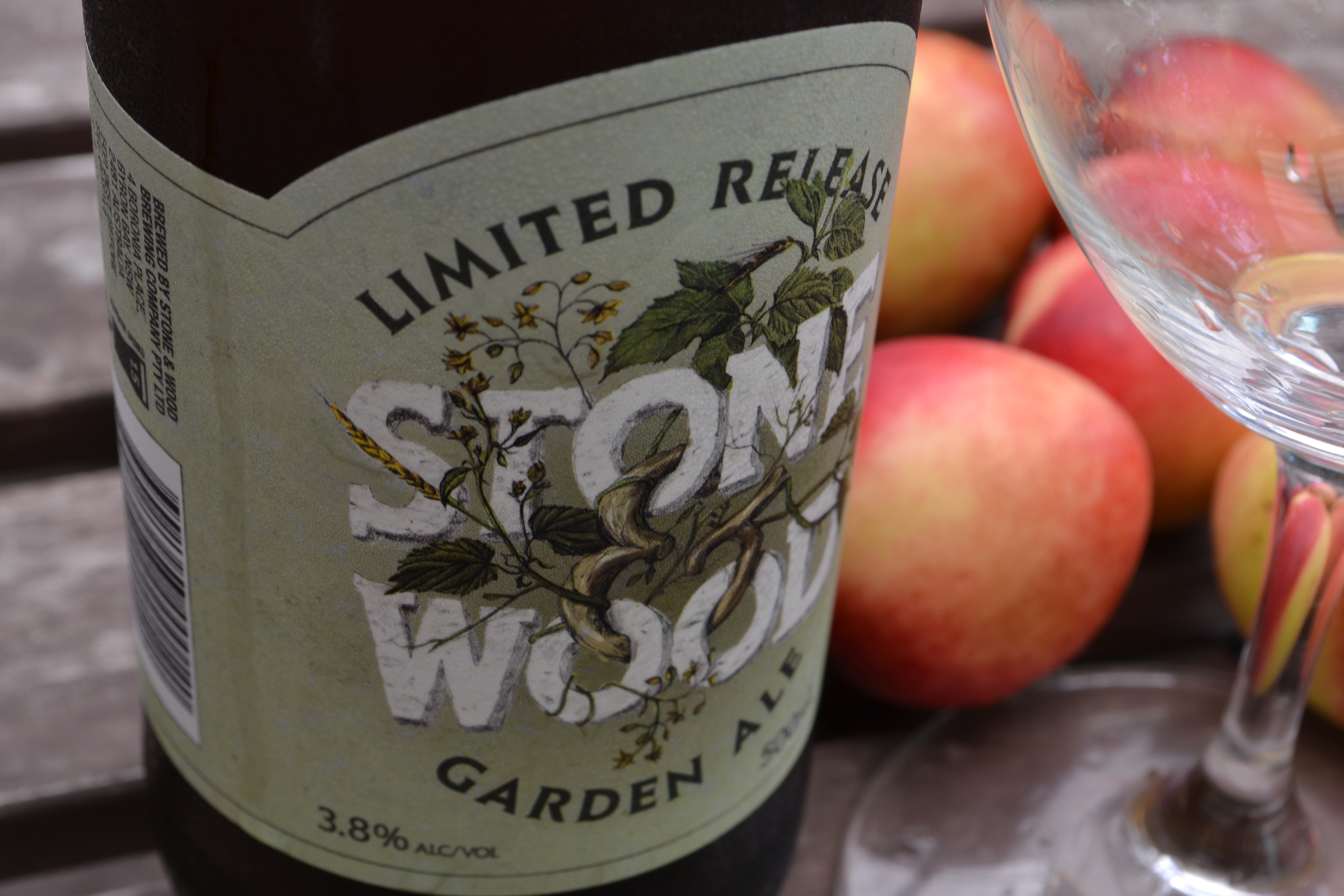 Sitting outside in the shade, ripe nectarines thunk to the ground, as my cat naps and sighs to himself.

That sense of time and place could almost be my entire review.

Stone & Wood Garden Ale. A “session ale” that comes below 4% (3.8%) and not edging close to 5, or in some recent cases, 6%. So an actual session ale. From their stable of beers this is the one I remember most fondly.

The original Garden Ale had juniper berries added to the boil and combined two Australian hop varieties, Summer and Ella. Since then, it has become a single hop, sans juniper, ale. Casting my mind back I liked the juniper version but enjoyed last year’s edition more. It has a strong memory attached of sitting outside on a balmy summers eve with some good friends. I had just finished two or three quite big beers (in both flavour and abv), the last of which was almost undrinkable with flaws

Getting a glass of the Garden Ale set my palate back to rights and hit all the marks for a summer time beer. I remember it as one of those beers that isn’t memorable for the beer itself but for its suitability for the occasion.  That is Stone & Wood’s MO. Brewing balanced, easy drinking beers that set themselves apart without gimmicks or shock-value. Beers that take little thought to drink but are thoughtful in their execution.

The 2015 version has up front nectarine aromas, not dominant but enough to make me question whether or not it was the ones I had just picked and sat on the table.

However the aroma is consistent with my previous experiences of Ella hops. Typically I get stone fruit and melon, and this definitely displays a small amount, backed up by some bready and slightly floral yeast aromas. This gets me wondering about their flagship beer, Pacific Ale, and how much the yeast contributes to the trademark passionfruit aroma.

It drinks cleanly. Bready-yeast finish, with a slight flavour of toffee, ever so gently, and it finishes with a gentle stone-fruit driven bitterness.

There isn’t a heap going on – it’s not a melange of competing flavours and I’ve found beers with Ella or Summer hop varieties excel when that is the case. They don’t bring the dominant aromas that hops from the US or NZ do and beers that try to use them that way tend to underwhelm.

With this hop it seems to be a case of less is more. This beer does a great job of that and at 3.8% it manages to drink full-bodied without overreaching.

Stone & Wood execute beers like this with ease. It is what sets them apart and this year’s Garden Ale is no different.

Disclaimer: This bottle was a free sample courtesy of Stone & Wood. My opinions, however, are given honestly.