Good beer is the new premium 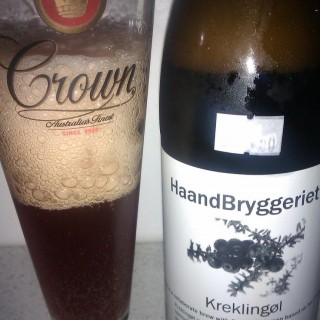 This is a premium beer.

Beer is changing and we all know it. People are leaving commercial lagers in droves for niche offerings and it shows no sign of slowing. I don’t need to cite anything here as it’s clear to anyone reading this blog just how quickly it is happening.

Now we get to watch the traditionally popular brands awake from their slumbering stasis and paw around at the market like George Foreman chasing a butterfly.

The latest attempt in Australia to stem the tide is from Crown (CUB/SAB Miller) and comes in the form of a golden ale.

From the launch article:

“This is not targeting your hardcore, discerning craft beer drinker,” he said.

“They are looking for complex beer.”

“It gets a lot of airtime but as a business were focused on where the big prize is,” he said.

That means targeting the “premium” end of the market where people want quality, he said.

I find the quotes a fascinating insight into how they see their customers and the market. Basically saying craft is loud but small (true) and its drinkers are discerning (probably not that true if we were honest).

However he’s saying the “premium” end of the market is where the money is (not entirely true considering VB is their company’s cash cow and premium it ain’t). And he’s saying their drinkers want quality.

Doesn’t everyone want quality? Isn’t a discerning drinker someone after quality? It seems a little contradictory.

Crown is a great brand. A strong brand and one of Australia’s most identifiable.

But that brand is one thing and that thing is their lager in a gold topped bottle. Its drinkers are drinking it for that gold bottle. The “prestige” in the brand association. The expensive beer on the company card.

VB is VB and always will be. They’ve tried a pale lager – which lasted less than two years. And something called “VB Raw” which I never even heard of until I visited their wiki page. It lasted a year.

Crown has tried a pilsner; again something I’ve never heard of and seemingly only lasted for a short time – and apparently a mid strength version in the hotter states. I’m not sure if the latter still exists – I can’t find much online.

They also tried putting it on tap but feedback from publicans was pretty clear. From an article at the time:

The word from one Sydney local and other pubs we spoke to is that people just won’t buy Crown Lager without that gold-labelled bottle.

I’m  also not sure if the draught version survived (I don’t hang out in places likely to have one). But that quote hammers home my point. Crown is the gold label.

Here’s another interesting thing. Last year they suggested that Crown Lager had 10% growth

“Over the last 12 months, Crown Lager’s actually been in 10 per cent growth, so it’s not like the brand’s broken, it’s really looking at the long-term to make sure it’s sustainable,” he said.

“The brand had been declining, we have arrested that decline,”

Again, semantics; but it’s clear they are concerned about consumer demand for alternative products and it is hitting their bottom line, whether they are willing to admit it or not. You don’t release a golden ale and tout its galaxy hops for a lark. It’s clearly in response to a shifting market and that market is shifting in big part because of craft beer. I’m not sure why they pretend it isn’t. No point in lying is there?

We know it, they know it.

So what should they do with Crown. They have a brand that has fairly negative connotations among non-Crown drinkers and a brand, like their others, that doesn’t appear to be able to shift focus successfully.

It’s actually fairly simple. They need to give people a reason to want to drink it.

Apparently since they changed the recipe in 2013 it tastes a lot better – which on hearing that has made me consider buying it and next time I’m in a situation where it’s that or Carlton/VB/Heineken etc then I’ll definitely test it out.

And while I’m just one person with a bit of a stick up my ass about beer, I do think there is something in that.

I’ve been told I’m not the target market for Crown or Crown Ale. But why aren’t I?

If the big beer brands want to arrest decline; give people a reason to stay. Don’t dilute strong brands with desperate attempts that are doomed from the very start. Make a genuine attempt at something for the “discerning” drinker (and don’t charge $100 for it like their yearly reserve whatever it is).

At the end of the day; that’s all we really want. I don’t drink CUB brands for the most part because they don’t taste very good. I don’t have a massive issue with corporate ownership. Hell, I work for a multinational company. Who am I to begrudge big business when big business are the ones keeping my cellar stocked.

The old associations of “premium” beer that the big brands are so desperate to cling to, like a junky holding his last fix, are gone. The curtain has been lifted and the trou has been downed. People know big brands aren’t premium because we know there is better product out there. Product that is well made, tastes good and is interesting.

One of my favourite sayings is “don’t piss up my back and tell me it’s raining”.

So Richard Oppy, don’t piss in my glass and call it premium.

Good beer is the new premium. Say it to yourself. Admitting you have a problem is the first step.