Like I did with glassware and cellaring, I’m not going to give you a list of what I think you should eat and drink with what. There are numerous lists out there, all basically saying the same thing.

There’s no reason to parrot what everyone always says and I’d rather people thought about what they wanted to achieve when approaching beer and food, rather than what everyone else thinks.

Beer and food is surprisingly divisive; with some in the community saying that it’s all a bit of wank rather than something that can improve either. I completely disagree and think that the right combinations can elevate both; while the wrong combinations can destroy a fine beer. 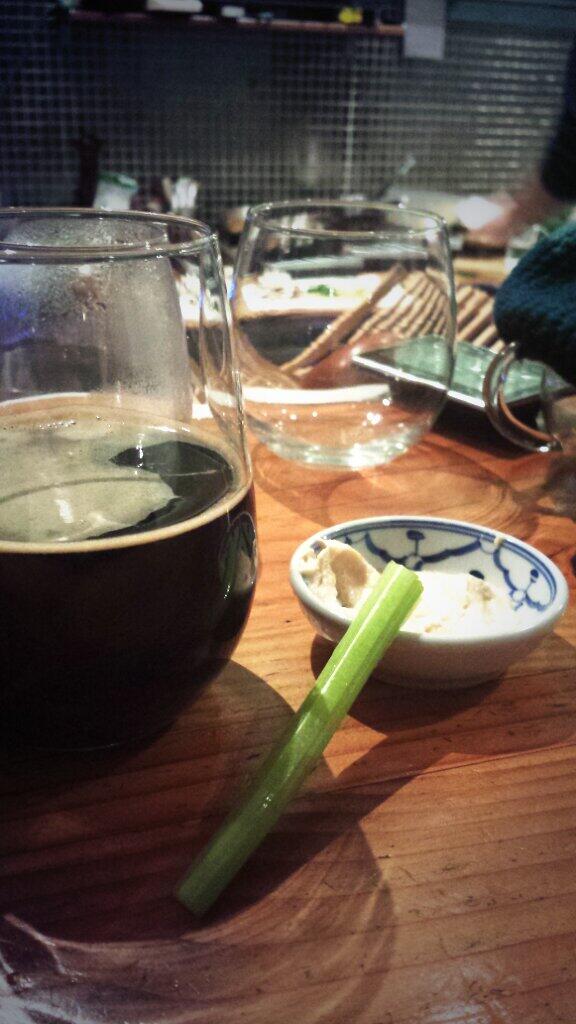 Breaking down why classic pairings work

Successful beer and food matching needs a bit of thought. It’s not difficult and it’s really down to asking yourself what flavours would work together.

There is a common idea of “Complement, Contrast and Cleanse” but it’s generally given as a choice, rather than a combined goal.

The idea that it needs to be one or t’other is ludicrous.

To illustrate let’s take a look at three of the most obvious examples always listed in beer and food pairings, and what they are usually listed as.

Of course it is. You have a big bitter hopped up beer to help cut through the spice heat. While the spice will help temper the hops and sweeten the beer… so that’s probably contrast too. Either way; not complementary.

Which is, of course, wrong. Anyone who makes a curry, be it Indian, Thai, or anything in between; knows the layers and balance that need to go in there to make it work. It isn’t just spice. It’s sweet and savoury too.

The same can be said for a good hoppy beer. You can’t just make a basic beer and throw hops into it. You need the malt to play its part too. To balance it out.

To further my point, there are also similar compounds in hops and the ingredients of a good curry from anywhere in the world. Let’s look at what Wiki tells us about Humulene, found in hops.

But here is where it gets interesting. The same page on wiki also tells us that Humulene is found in bay leaf, Vietnamese/thai mint, and ginger.

All common ingredients in curries.

Let’s have a look at cardomom, also a common ingredient in East Asian curry. Again, from wiki:

Cardamom has a strong, unique taste, with an intensely aromatic, resinous fragrance.

I could list ingredients in curries and show how they complement, cleanse and contrast with hopped up beers all day. But let’s try something else.

Both also have bitterness to help cut through the sweetness (oh, so cleanse as well) while the roasted malts help give a savoury element to the beer (there’s the contrast).

Oysters and stout? Nothing in common.

It’s all about contrasting dry roasted finish with fresh brine and mineral flavours from the oyster. The oyster is the cleansing part here as it refreshes and brightens the palate.

These are definitely not complementary… that is if you ignore the savoury/umami element of both. Oysters are rich in umami and the roast in stout is the same thing.

Another pairing that I’ve been exploring lately is mushrooms and stout. Again, umami on umami complements each other while sweetness from the beer contrasts the earthy flavours, and the carbonation helps cleanse the heavy flavours from the palate.

So basically, 3 Cs is a stupid thing to focus on. Any meal and drink pairing needs more than one C. It needs all of them

When approaching beer and food, you want balance. You want to think about what you have in front of you in terms of beer and food and how they might work together.

Try two at a time

One of my favourite things to cook is slow roasted pork shoulder.

For my birthday last year I couldn’t decide which beer to have with it. A scotch ale, big and rich, malty and sweet; or a gueze – sour, tart, slightly sweet, and refreshing.

So in the spirit of the El Paso ads

We had them side by side.

Now I would’ve said, hands down, that the scotch ale would’ve been the preferred and the “correct” match. Roast meats and scotch ale is a classic, while geuze is typically left for fish, funky cheese and fruit desserts.

However the geuze came out on top with everyone.

Providing contrast and cleanse to the fatty pork, it also complemented the mountain of fragrant herbs I like to use in my gravy and in the roasting pan. I love thyme in roasts, and the hay/straw qualities in a good geuze really provide a great fragrant friend to its grassy-wood flavours.

So if you can’t decide between pairings, then try them both. The best way to find the differences is to try for yourself. The more you try, the more you learn what you like and what beer works with the food you like.

There is no right or wrong when pairing beer and food. Like cellaring, it’s about what you want to achieve. Where you want to take a dish and how you think a beer can stand up to it.

Like trying two at a time, it’s great to explore and experiment with food and drink. Discovering new flavours in beer can be as simple as trying some different fruits, herbs, vegetables, wines, and spirits.

When you find similarities, you can explore how to exploit them to create a unique pairing.

A recent example is, I found I like a certain gin with has a big lime flavour – so I’ve tried it as a boiler-maker next to a very floral and citrus-hop driven pale ale and found it worked amazingly well.

I also have a great recipe for a juniper berry/chili/bay leaf rub on roast venison.

So broken down, here are the flavours I want to exploit across the drinks and meat:

And suddenly I have a unique match. Gin, pale ale, and venison. Exploiting the flavours to explore something no one else has thought of.

Giving us 3 Cs; but ultimately giving balance (and a pretty boozy dinner).

When in doubt: Belgium

I don’t know who coined this, or where I first heard it, but it is truly the best advice for beer and food matching. Belgian styles such as tripels, dubbels and saisons are the perfect foil for matching food.

Belgian beer is based around balancing big flavours, resulting in extremely drinkable booze laden beers. Perfect for sharing over a meal.

Get to know Belgian beer, and get to know how it works with food. The same beer, a Westmalle Dubbel for example, can take you through an entire meal and work perfectly. Not too many other styles can achieve this.

With all the new-world US styled beers, Belgium is still the king for a reason.

NB: The Good Beer Week event for 2014 that I am putting together with Storm in a Teacup has only one ticket left. This piece might provide some insight into the direction the event will be taking, or the approach we will be taking. If this interests you, get in quick.