Yay Hottest 100 beer and music time again, when everyone gets up on their high horse about whatever terrible taste they have. Like “omg a rap song and a pale ale are popular this is outrageous”.

Once again the major beer players stepped up with some really good content around the event. Crafty Pint has analysis and infographics while Australian Brews News did some amazing live crosses with brewers and luminaries, all from the eventual winning brewery. Genuinely good stuff from the beer media. Meanwhile at Ale of a Time dot com 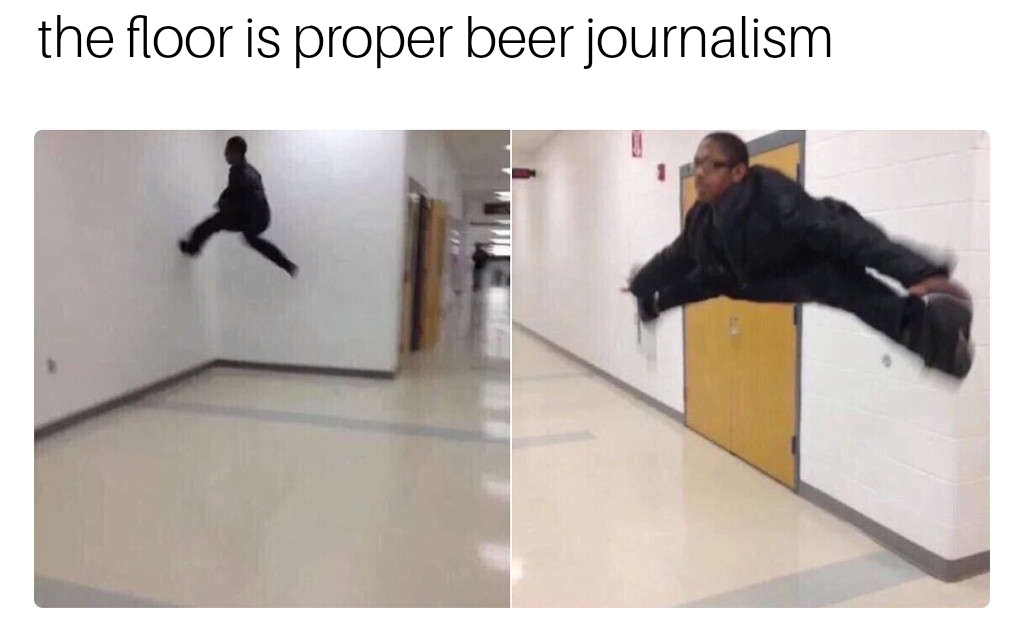 That’s right, it’s time for another installment in my low effort “ripping on social media comments” series. Being a reflection of 2017 beer, I have decided to do memes as well. I’ll scatter them along the way like some juicy meme-nuggets. Enjoy and please if you want to make a dull comment, I would absolutely love you to. Never change, people on the internet.

You can read previous installments of this series here.

Beers with bigger distribution get more votes? This is fascinating stuff. I wonder what more insight he has…

And stone and wood second. It’s like the VB of craft beer!

Jules comes in with a sick reference to a video that went viral like, two years ago. He’s been sitting on this one for a while, ready to drop the hammer:

Look… it’s zingy and easy drinking, but it’s not a succulent Chinese meal

Real talk though, the video is still pretty funny. 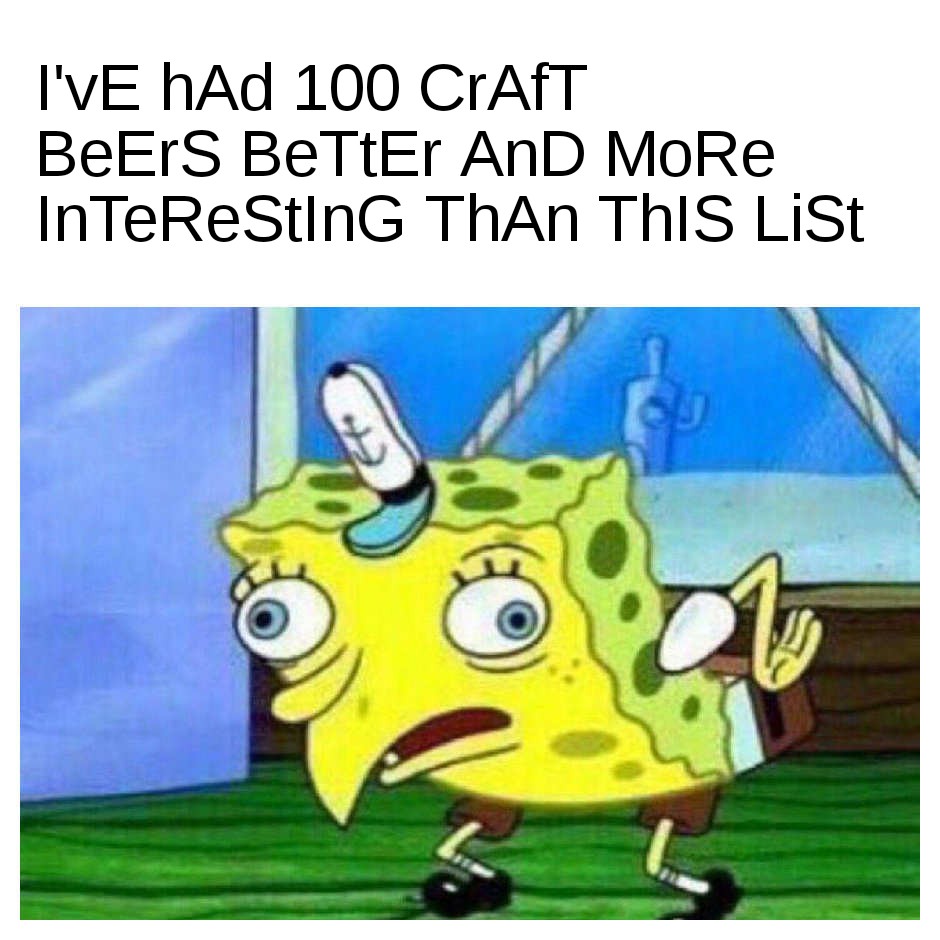 Meanwhile, is this Michael Ainsworth bragging that he goes to the Opera House? Geez, how fancy, your royal highness.

This now about distribution not beer quality. I can buy this at the Opera House & the Chinese restaurant in my nearest Leagues club. And of course Dan Murphy’s.

You gotta give Ainus Horriblus (which is probably what his mates call him during their bant sessions) some credit, he does have a keen eye for seeing products in places. He’s just cruising round all “yep, I can buy products in these places”. What a champ. 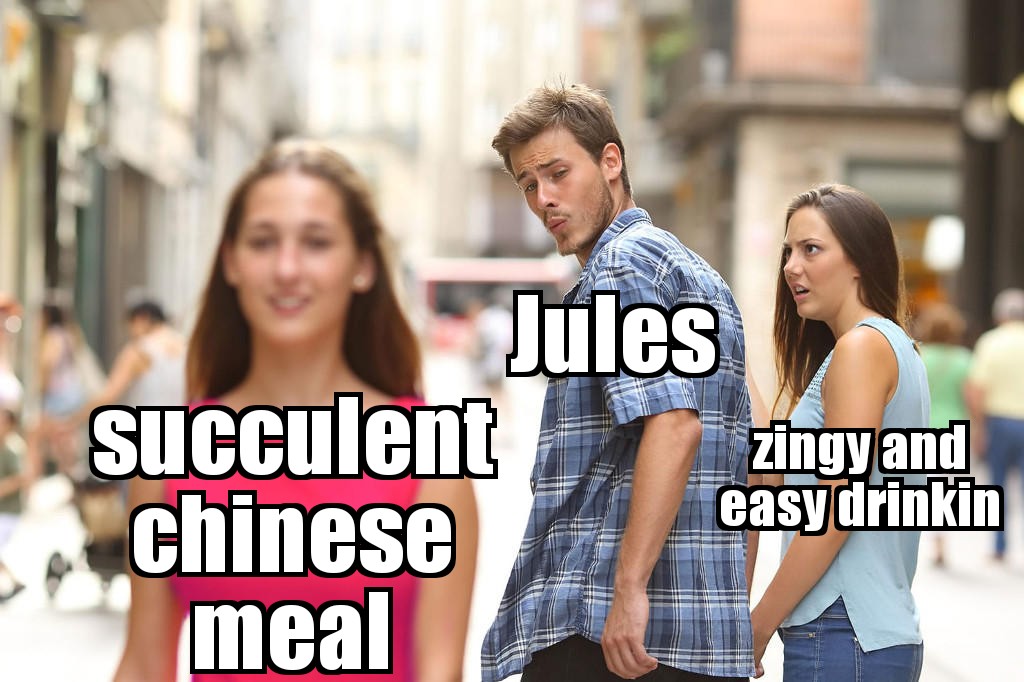 Rowdy Sean Piper is giving us a look through the They Live lens at the real top 3. Here’s his take:

I mean, one of those is literally in the real real top 3. The next is #6 and the other is 21st. His complaint is that three beers he rated highly didn’t rate highly except they all did incredibly well. Sean, buddy, just think before you type next time. If the list is “mainstream” then you are mainstream because like… you know…

Let’s just start using our brains a bit more. It’s not just Sean, of course, it’s all of us. As a society. This shouldn’t be so hard and yet we here we are. 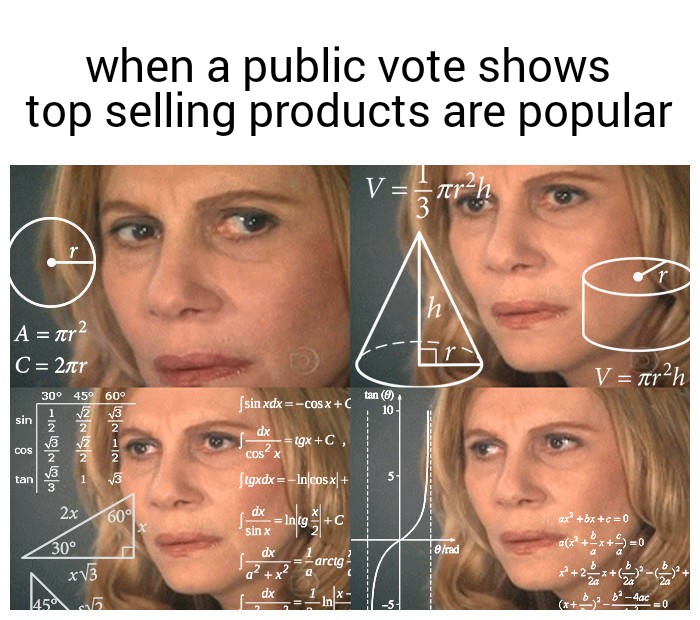 Via twitter, Richo has ideas to improve things by only letting people with one year’s worth of credibility vote. Also he uses the term “squirrel snot” out of nowhere. I don’t think I like it tbh:

A new requirement for voting in the #Hottest100Beers should be that the voter has been drinking craft beer for over 12mths. Will eliminate squirrel snot like yak and squire from the mix.

Now some real analysis from someone who is at least two years deep in the craft beer game and thus would qualify to vote under Richo’s scheme. Here’s his comment on Pacific Ale at #2:

It was a great beer 2 years ago… craft beer has moved on since then… no way no.

What these old school craft heads are telling us is that craft beer is way beyond fruit forward, low bitterness, hazy beers. Thank you for FINALLY saying it Andy and Richo.

Tom Holland has a question that we need to answer:

Did big shed Californicator get up there?

John hasn’t checked it in years (he’s probably been super busy doing awesome things. Fuck yeah Johnny boy!) but he has a question about the pale ales:

Haven’t checked in on this comp in years. When did it become a Pale Ale dragrace? Seems a shame.

Not like it used to be mate, even though a pale ale has literally won it every year since the start. Damo, agrees that it’s fallen to the level of “bogan juice”

After using classist insult “bogan” like he’s probably going to go to the Opera House with muggins up there, I low key crept on Damo’s insta and he was pretty excited for the Guns N Roses concert, AND he shortens his name to “damo”. Et tu Damo.

Anyway, let’s have a look at how much worse it has gotten since 2008 to prove John and Damo’s point: 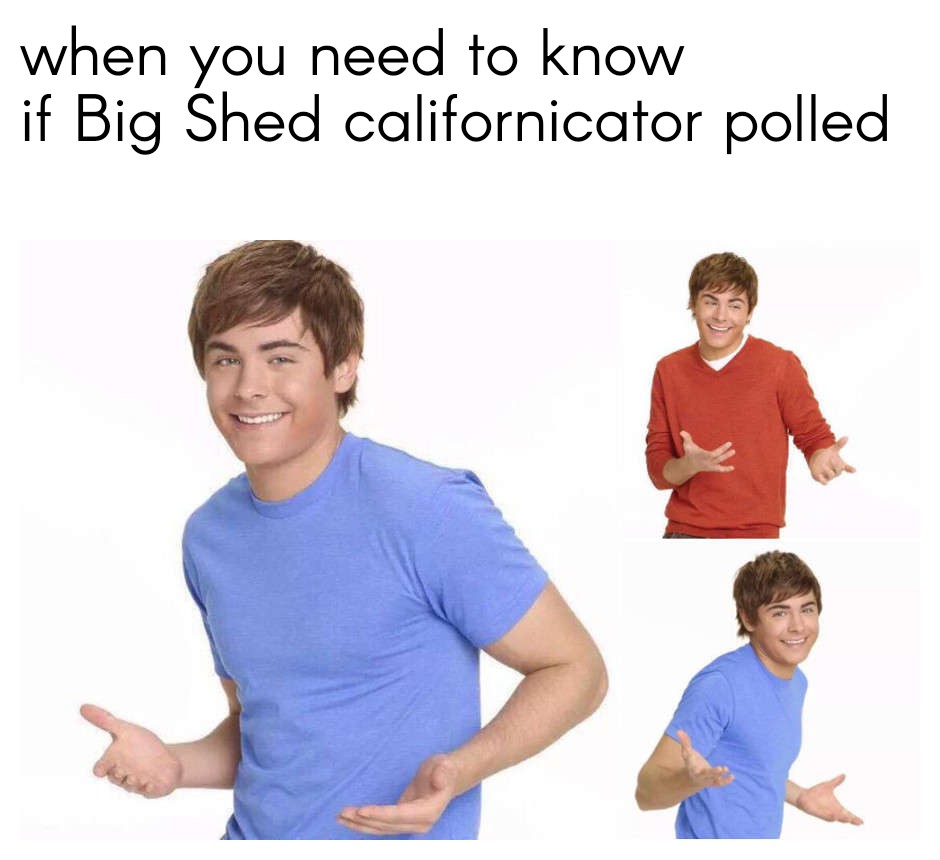 Meanwhile Brucey has taken a leaf out of ol Ainus Horriblus’ book and is out there on the streets keeping us informed that places do in fact sell products.

Seriously how could Pacific ale be the second best beer in Aus? Is it the fact most places sell it? Even the local grilled stocks it!!!!

Goin down to get a burger at his local Grill’d (Aussie Sunset is their best burger don’t @ me), and he sees Stone & Wood there!? He’s like “nah mate, not a good beer if it’s here”. This is how all beer should be judged fyi.

David has a wee story (wee is a pun here hahaha)

After a night drinking real craft beer ma piss would taste better than Stone and wood so what does that say about the whole voting process??

I’m not sure if he’s implying that the voting process is done by people that drink his pee? Or their own pee after drinking Stone & Wood (which ain’t a REAL craft beer fyi. Independently owned, does a ton of work for their community and the environment, and invented a style that typifies local craft beer. All of these things are definitely NOT REAL craft). Either way, there’s pee involved and it’s on his mind. 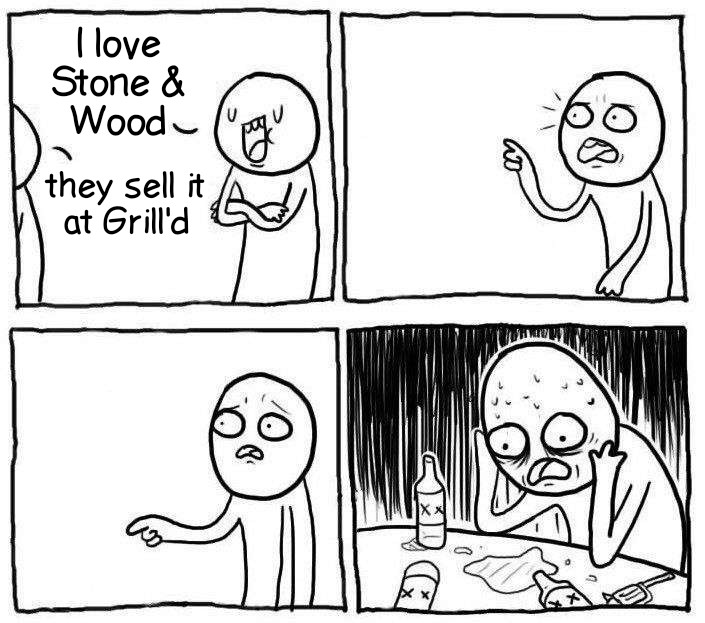 Your list is a joke. Again! You need to diversify the judges from having all pale ale makers selecting pale ales (nearly 80% of the list) and leaving out so many makers and styles. What a biased judging panel. Stone and Wood compared to others? Pissing in each others pockets each time. Amusing seeing this posting each year and the same list being put up. Last year pale ales made up 83% I think it was so you’ve dropped a smidge.

And once again, I’m confused by a piss comment. Is he saying S&W are pissing in other people’s pockets? Or… what’s happening here? That’s not how that saying works. Anyway, let’s diversify the judges from literally anyone in the entire world who wanted to vote. Yeah good idea, Elon Musk.

What we are really wondering is, what does Grant Crawley think about all of this? I, for one, I hope he regards this list…

After reviewing the list, I’m going to go ahead and disregard it…it seems to be a mish mash of good and extremely average…but then again, I find that with most of these type of lists.

Oh shit. He’s disregarded it. This is big news. 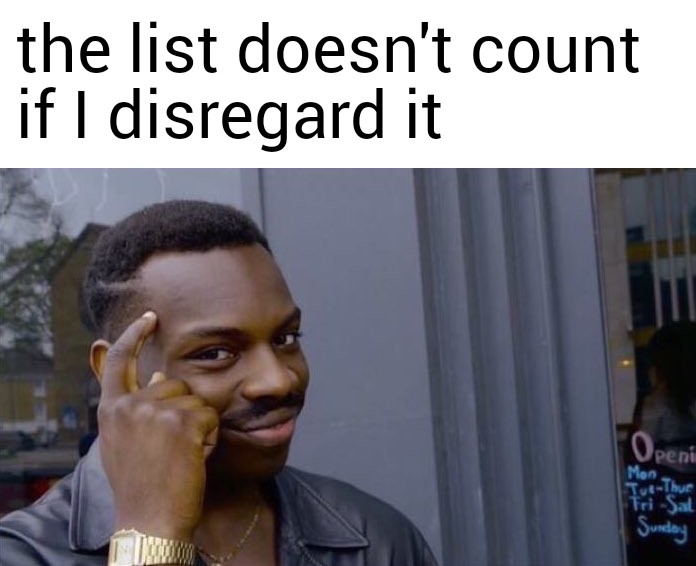 That was from Bluetonguebill and he’s right, it is verrrry surprising that a one off, small release, Black IPA didn’t poll in 2018. Yo GABS can you check this for vote rigging. Why are you doing this to them. Please fix it.

Seems very stagged (sic) to what is sold at Dan Murphys.

It IS weird that a bottle shop that has over 30% market share (in terms of dollars spent) would have such an influence on what people drink. Also I’m not sure what he meant to type when he typed “stagged”. I thought “staged” initially but that doesn’t make sense. Did he mean “tagged”? “tied”? Thoughts below please.

Finally we have Pete, who manages a bar in Melbourne, and set himself up to be owned by his buddy Jason:

Peter: Some fairly average beers making the top 5 so far

Jason:  looking at your bar menu you know a hell of a lot about average beers 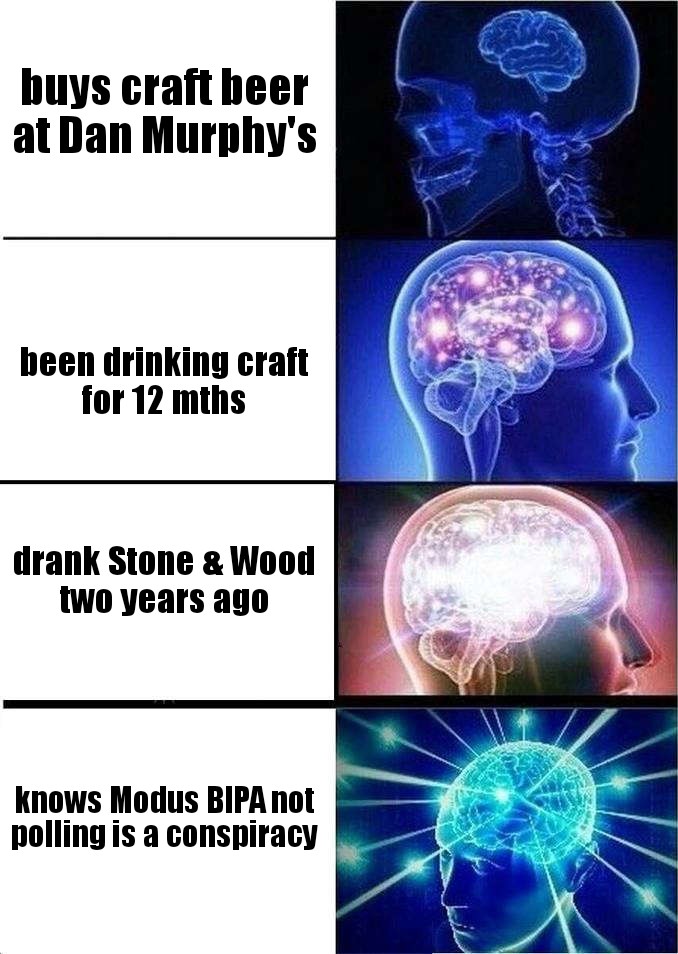