Let’s Get A Cool Hat…

If the new Instagram is any indication, the CUB marketing team look to be re-positioning Victoria Bitter.

Updating the increasingly tired 70’s and 80’s bloke schtick, to a more modern and gritty feel. It’s still very blokey, but a little less “cricket and stubbies” and more “skateboards and laneways” (at least on Instagram, but more on that later).

It’s probably the exact right tone, given it’s clear that traditional advertising isn’t as effective anymore. Just this week, Mumbrella posted a story featuring old ad execs sounding a bit morose that they no longer have a bunch of cash to blow (pun intended…) on ridiculous beer campaigns. VB was highlighted as one such brand.

However, should you be in the midst of re-positioning your brand and commissioning photo shoots, one thing you should double check is if any competitor logos are prominently in shot. 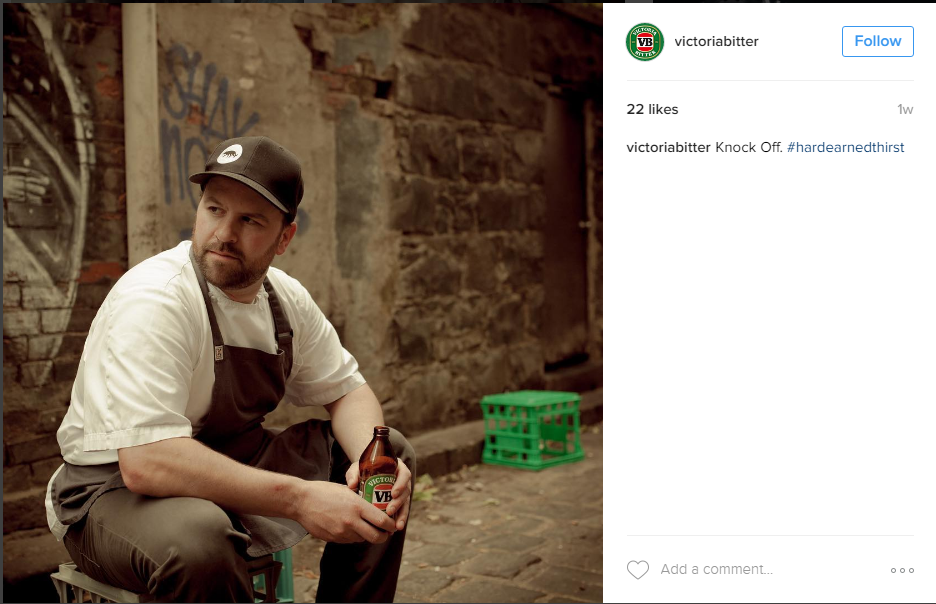 For those unaware, there’s a Wolf of the Willows hat on that fella’s head. The Cheltenham based brewery getting a bit of a free hit on CUB’s dime.

Maybe it was intentional. Maybe they thought including a small brewery’s dope looking cap (and honestly, it’s a dope looking cap) would add authenticity to their Instagram. Maybe there’s a cheeky shoot producer who wanted to risk their job with a knowing wink. Maybe it’s just a case of “Let’s get a cool hat…” and a Wolf of the Willows hat was the nearest thing on hand. Or maybe WotW are about to send out a press release announcing their sale (I’m going to risk my reputation and not even bother to check before stating that a buyout definitely isn’t the case).

If I was a betting man, which I am, I would bet that it was just a mistake.

However, while I’m here, I may as well unpack this photo a bit more. For a start, he’s wearing an apron and sitting on a milk crate in a laneway. The caption says “Knock Off”, so I’m guessing he’s just finished a shift at an inner city Melbourne restaurant – hard earned thirst and all that. However, this bloke doesn’t have any food stains, or cuts, or marks, or sweat beading off his brow. In fact, it doesn’t look like this cobber has even been anywhere near some hard work. He looks freshly laundered. Surely he’s not having a beer to start his shift? Surely they aren’t promoting irresponsible drinking?

Photo pedantry aside, the new Instagram led me to peel back the VB onion to learn that none of their social media is really in-step with one another. The tone is very much the classic VB blokes we know and love, except this Instagram. It leads me to believe they are trying to vary their strategies according to the platform, which is probably a pretty good move as social media audiences continue to fragment across platforms. .

It looks like they’ve chucked a few snags on the barbie but no-one is tending it. Are they waiting for the bloke in the Wolf of the Willows hat? Is that why he’s not yet dirty? Because he’s quietly drowning his sorrows in a nearby laneway, knowing he has to put up with a barrage of shit jokes from ex-cricketers. Just dulling the fucking pain of the looming summer cooking sausages for this pair, who for some inexplicable reason, are watching cricket highlights 20 metres away from the television. Any further back and they’d be in the pool.

Yeah, I’d want a drink too.

Ohohoho, walked into that one.

Anyway, if you want to get one of those caps, you can here for $25: http://www.wolfofthewillows.bigcartel.com/

Tags: VBwolf of the willows