In the first review for a while on the site, I’m looking at a new release from La Sirène. A brewery that I have a lot of respect for and has a strong following in Melbourne, along with parts of Asia and NZ through their export efforts. 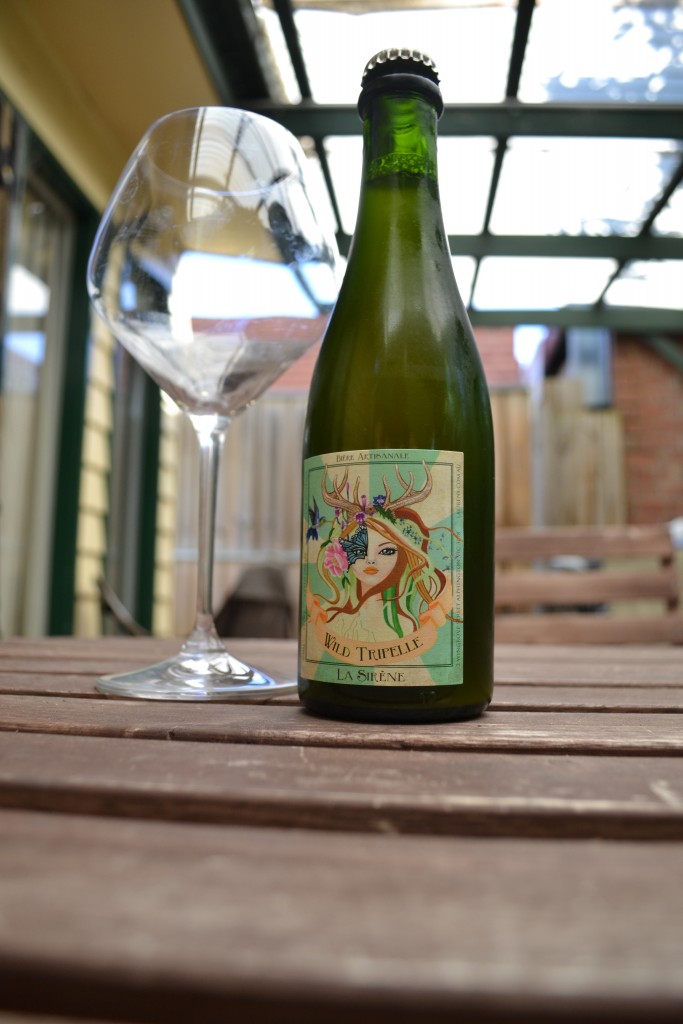 This 100% spontaneously fermented Tripel is from La Sirène in Melbourne (Alphington to be precise). They have built a strong reputation for their well made, classic saison styles along with some small batch soured beers that pop up on tap from time to time.

This was released along side their “Imperial Praline”, an imperial version of their incredibly popular Praline beer, brewed for the 2014 Great Australasian Beer Spectapular, it won the people’s choice and has since gone on to be a staple in their range. No doubt the imperial version will sell like crazy, but Praline is my least favourite of their beers so I went for this instead.

This is the second batch of this beer, the first only being a small one-off run during Melbourne’s Good Beer Week.

I spoke to Costa, founder of La Sirène, for my recent story about unconventional fermentation in Australia and NZ. He gave some insight into their spontaneous process here:

From the beginning we were always going to head down the path of doing wild fermentation, so it was just a matter of time. What we did was we  did two years of pilot trials that were spontaneously fermented various worts under various conditions to see what sort of results we could get. And about 120 brews later we pretty much figured out what’s there in terms of a viable fermentation source, so we did our first 100% spontaneously fermented beer in May this year. We only did that because we got repeatable results at the pilot level for a couple of years before that.

I think we are lucky because being in an urban area, 9kms from the city, you wouldn’t think there is a huge amount of opportunity to harvest indigenous yeast and bacteria. I think the opposite, I think in urban areas you’ve got more diversity and where our brewery is located, we are bordered by a creek, and bordered on the other side by a national park, so our brewery is directly exposed to this amazing diversity of microflora

Tripel as a style is one of those Belgian styles which historically doesn’t mean a whole lot; but in modern times you can expect a strong, gold/yellow beer, with a residual sweetness, some alcohol warmth and candied banana flavours. However given the spontaneous nature of this beer, it’s hard to know what to expect.

This one is 7% abv in a 375ml bottle. I grabbed mine from Fox In The Corn here in Melbourne for around $13.

La Sirene always use an image of a “siren” on their label (taken from their name of course), with their core range using the same image with different colour treatment, and their limited releases using a completely different image (still of a woman) each time.  In this case she looks like some sort of forest siren, with antlers, a butterfly for an eye and other miscellaneous flora and fauna make up her hair.

When poured from the green bottle (all the best beers are in green bottles, everyone knows that), it pours rich gold to deep orange. Translucent and glowing like a Pulp Fiction suitcase.

The head crackles and fizzes and slowly dissipates. 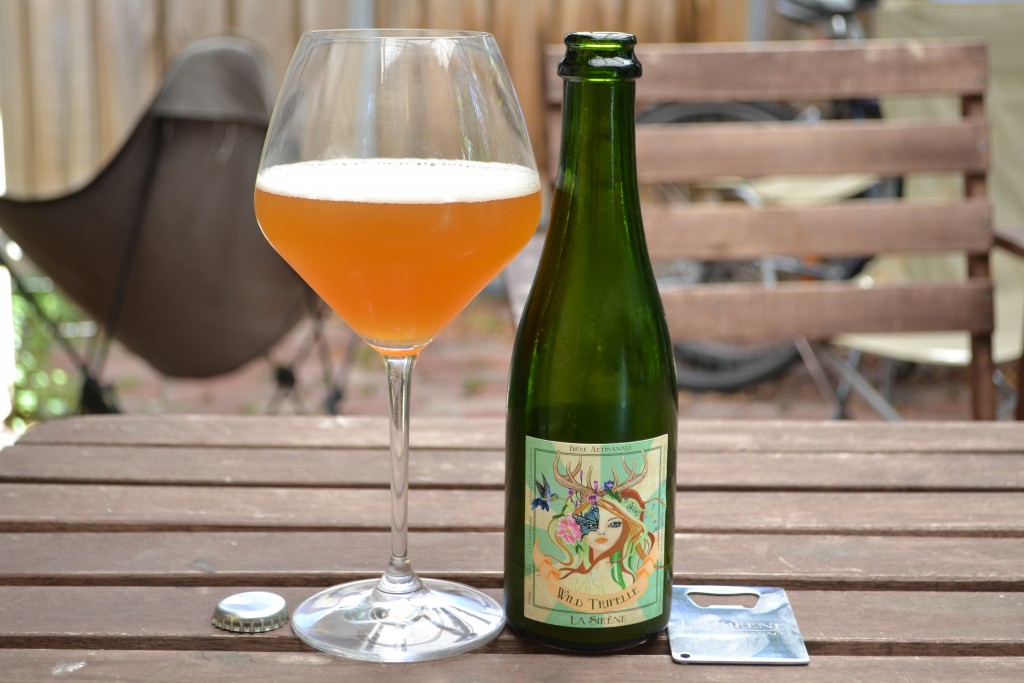 My initial thought was stone fruit, frozen orange and pineapple juice. It’s a character I’ve had from other beers from La Sirène in the past using wild yeast which leads me to believe they are developing a very interesting house character. I can’t recall any other wild yeast beers throwing that much fruit. While it’s not dominant in this version it is still lingering.

Along with there are red apples and some candied banana. Not an incredibly fragrant beer but not without interest.

It tastes far cleaner than any other spontaneous beer I’ve had and has little to no sourness. Fruity with red apple, stone fruit, their house character and a minerally finish. It’s full yet dry and has a small amount of alcohol heat. Some residual sweetness is there in the form of candied banana but not overbearing or detracting from the mineral and dry character. Whether or not some of the warmth was from brettanomyces yeast (which I often taste as slightly warm and leathery) I couldn’t be sure.

This beer is going to let down a lot of people who may be expecting a full on sour experience, who are instead met with a mineral dominated, dry fruit cocktail.

It’s a beer that I really enjoyed and one that I could drink very easily without too much thought, or one I could sit and think about for a long time.

With the next step in the evolution of La Sirène being their coolship installation, the resulting spontaneous beers will have a slightly different character to this due to bacteria and yeast coverage and propagation on the cooling wort (a coolship/koelschip is a large open vessel where the beer is transferred to cool and pick up wild yeast and bacteria before fermentation. In the case of this beer a regular open fermenter was used meaning less surface area was exposed to the outside).

It will be interesting to see how this beer develops over a couple of years in the bottle, as the microbes present in wild beer will continue to work away for a long time yet, and I’m excited to compare this to future coolship releases.

A really lovely, restrained beer that has an unusual depth and its own personality from the label right down to t he last sip. 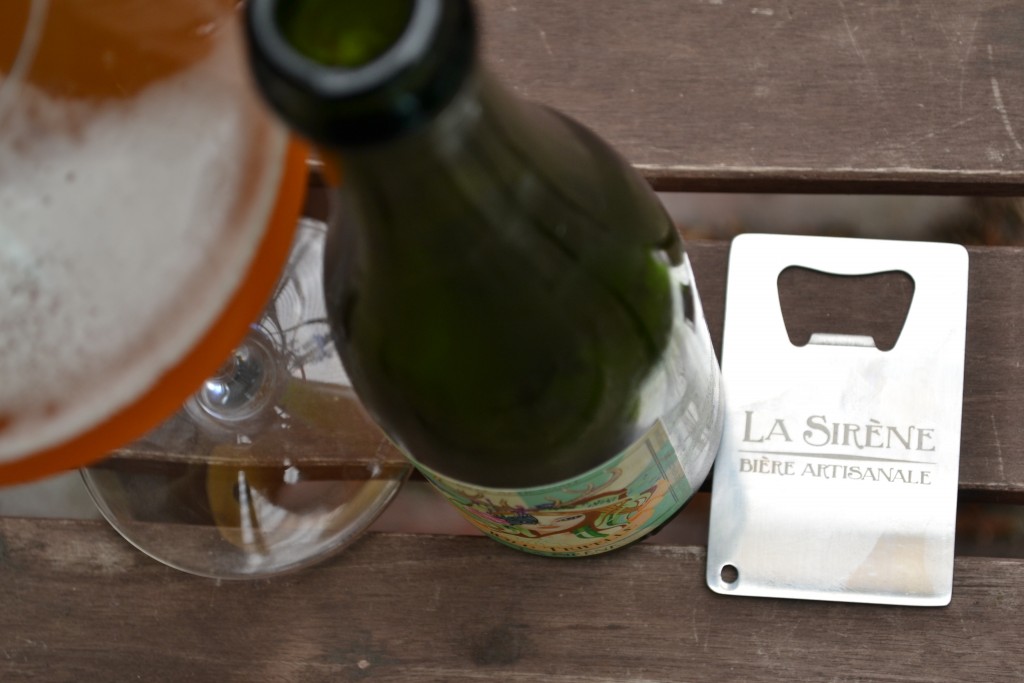