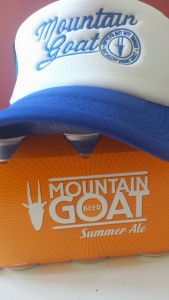 Today it was announced that Mountain Goat brewery was to be bought out by Asahi. Today two pioneers of modern beer in Australia have finally been paid what they deserve for years of hard work.

Mountain Goat is a crowd favourite in Australia and are pioneers, helping redraw the beer landscape in Melbourne leading to Melbourne being one of the greatest beer-cities in the world. Without doubt Mountain Goat has been one of the strongest driving forces.

I’m glad Dave and Cam’s (the founders) hard work has given them the chance to make some serious money. It’s nice to see good people rewarded for doing great things.

Right now we are seeing a global reinvention of the beer market. It’s exciting to be part of in a professional capacity and even more exciting to be part of from a drinker’s perspective because right now you can’t throw a rock without hitting a bar, brewery or store selling great beer. The baseline has improved so much that in Melbourne the baseline is increasingly brands like Mountain Goat, Coopers, Stone and Wood and Little Creatures. When that is the absolute minimum to expect from most inner-city bars then things are pretty good.

I worry that with excitement and growth always comes a market retraction. People lose interest in new products, trends or flavours and something new always comes along. The beer market right now won’t be immune, whether it’s in five years or twenty years, it’s inevitable. When retractions come, so do job losses, cost cutting, and closures.

I worry that these takeovers are still just the tip of the iceberg and I worry this won’t be the last by a long way. No other industry has seen the damage that massive conglomerates and international corporations can do to variety, choice and innovation than the beer industry.  The result of brewery takeovers isn’t a good result for the consumer. The result is a one-note homogenised beer market and the reality is that it is where we could very easily end up all over again.

When the market changes I want to know the people in charge of the stainless and barrels still want to make good beer. I want to be confident that the decisions I’ve made as a consumer will lead to the people I trust being in a position to put great beer in my hands.

I worry that that is not how it works with big business.

I get called naive for reacting negatively to sales such as this, but if anyone thinks a company like Asahi (or any other multinational lager factory) won’t start abandoning barrel programs, one-off releases, extra dry hopping, and quality ingredients the second the bottom line looks shaky then I can’t help but wonder if I am really the naive one.

Asahi is a company importing concentrate from Europe to make “cider”. They aren’t doing it because they love the product and if they could somehow do it cheaper then you know they would.

These kind of decisions and sales don’t make me mad. Without Mountain Goat the industry wouldn’t be where it is today and the people responsible are getting paid. The short-term result will likely see the team at Mountain Goat with more money to spend on positive improvements, or new product, or expansion. It will see Mountain Goat beers in more places, more bars and in more mouths. It will help spread one of my favourite beers, their Hightail Ale, even further afield. There are many upsides to this that have been pointed out many times to placate and reassure snobs like me.