A number of years ago I was part of a “focus group” for the Matilda Bay brand. This was in the lead up to their new (and now defunct) South Melbourne brewpub. At the time it was pretty clear they were struggling with the identity of the brand and wanted to make sure it had a strong position in a changing market.

It was clear to me, and I remember stating this in the group, that Matilda Bay as a brand had no real association with anything. Fat Yak was looming as their money maker and the rest of the range was just twisting in the wind. The beer that really put them on the map, Redback, was and still is barely sighted, and their two best beers, Dogbolter and Alpha, just a footnote.

Years later and not much has changed. The brewpub did go ahead in an awkward location and it has now closed – leading to brewing operations being shifted to Tasmania. 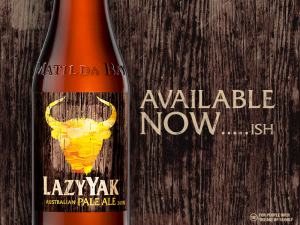 CUB still struggles with what exactly to do with Matilda Bay. They have announced a smaller version of the flagship Fat Yak, called “Lazy Yak” (possibly named for the amount of effort they put into coming up with the idea) which is a 4.2% pale ale.

How this is supposed to clear up any confusion is completely beyond me. Rather than creating clear consistency across all Matilda Bay beers they’ve created additional labels… but still under Matilda Bay.

In addition to the ongoing identity crisis that is Matilda Bay (don’t take my word for it, read through their history on wikipedia https://en.wikipedia.org/wiki/Matilda_Bay_Brewing_Company) it seems CUB straight up just don’t know what they are doing.

From Brews News story linked above we get quotes like this:

The classic beers being a pale (Alpha), a wheat that historically was their best seller (Redback), a honey-wheat (Beez Neez) a pils (Bohemian), a dark lager (Dogbolter) and a pale lager (Minimum Chips).

I agree with the comment about the names not being able to crossover. Reading through you have to wonder how they could come up with such an insipid range of inconsistent names. The comments around the flavours are crazy though. There is nothing there that the mainstream can’t handle and in the case of Redback it was embraced quite well by regular drinkers long before “craft” came about (my mum, who is barely a beer drinker, still talks about how much she enjoyed drinking Redback in Perth in the early 90s).

This whole mess reeks of CUB trying to cash in on trends without taking any risks and it leads to quotes such as these two… where in one breath Ovadia is saying craft is reinvigorating the beer business, while at the same time pushing away the flavours (hops) that have driven craft beer to this point:

“So do I think craft has limited potential? No, because I think the drivers of craft have massive potential to completely reinvigorate the beer category which I think it’s doing.

“Do I think that a plethora of extreme craft beers with high BUs and super-high hoppiness levels have limited appeal? Yes – that’s not an opinion, that’s a fact. It’ll never cross over to a broader group,” Tim said.

It’ll never cross over to a broader group. Never.

You have to wonder of the wisdom of that when you can look at the more mature market in the US that has breweries such as Sierra Nevada, Lagunitas and Stone, pumping out aggressively hopped beers (in the latter two cases often far more aggressive than much of what we have here) to an increasing market while making a lot of money in the process.  Probably a long way from “mainstream” but American style pale ales and IPAs as a whole are very close.

Meanwhile CUB bury their head in the sand and hoping craft will just go away even in the face of declining sales.

My advice to them is to completely rethink Matilda Bay. When you have one of the most identifiable pales in the land (Fat

Yak), an approachable easy drinking beer with a great history in the market (Redback). and two great geek-pleasing beers such as Dogbolter and Alpha then you have one of the strongest portfolios of any brand in Australia. Rebrand them as such. Make it clear to the “craft considerers” (their term, not mine) that Matilda Bay is brewing delicious beers and they are all proud to live in the same stable. Don’t push them around and further muddy the waters confusing even those familiar with the beers. At least, at the very least, label them so they at least look somewhat similar to each other.

Have faith and confidence and show a little spine. The lack of clear direction and confidence is bleeding out of every pore and it’s abundantly clear they would rather keep talking while their mouth fills with sand until eventually we won’t be able to hear them anymore.