In the last couple of months I’ve been fortunate enough to taste some beers that are extremely old.

Beers that are probably considered to be well past their prime but the kind of beer that just burns you with curiosity. When you get the chance to taste a 1987 Liefmans Goudenband or a 1984 Rodenbach it’s hard to think straight. Sure, deep down you know that they probably won’t be very good… but what sort of beer lover would I be if I didn’t do my best to find out. And find out I did.

Before I talk about each, lets talk about aging, or cellaring, beers.

Basically aging beer equates to “keeping a beer for longer than you normally would”. It’s one of those things people tend to make a bigger deal out of than necessary. If you have a relatively cool (10 degrees celsius is optimal), dark place then you are set to age your beer.

Read any online forum and you’ll find endless questions about what beers can be aged. My answer to that is “any beers”. Some will age better than others but for me aging a beer is about two things, curiosity and seeing how a particular flavour or ingredient changes over time. A recent example from my cellar would be the Shepherd’s Delight, a spiced ale from Little Creatures. I hated it when I first tried it. I thought the spices and alcohol created an unpleasant, hot, and wobbly beer. However knowing that the spice would probably mellow out after a year or so, I stuck a bottle away and forgot about it.

I was right and when I opened my second bottle a while back it was a real delight.

I have a bottle of Brooklyn’s Black Ops in my cellar too. Again, I hated the fresh bottle I tried. All sticky bourbon and alcohol burn. That bottle is coming up two years and I think that will be perfect.

So how did two beers that were in their mid to late 20’s hold up?

Let’s say… interestingly. Which is part of the fun right?

For those unaware, Liefmans Goudenband is a “Flanders Oud Bruin” style, while Rodenbach is a “Flanders Red”. Styles similar in the sense they are both sour and slightly vinegary and obviously originating from the Flanders region of Belgium.

I should add that we think the Liefmans was pasteurized, meaning there should be less of a  change in the bottle than if it was not.  I haven’t been able to find an accurate answer on Liefmans and when they began pasteurizing their beers but everything I’ve found points to yes, the bottle probably was.

Rodenbach apparently began pasteurizing in the 90’s, which puts the bottles pre-pasteurization.

Here is where it gets interesting then – given that knowledge, it would be assumed the Liefmans should taste stale and lifeless and the Rodenbach would be quite different. 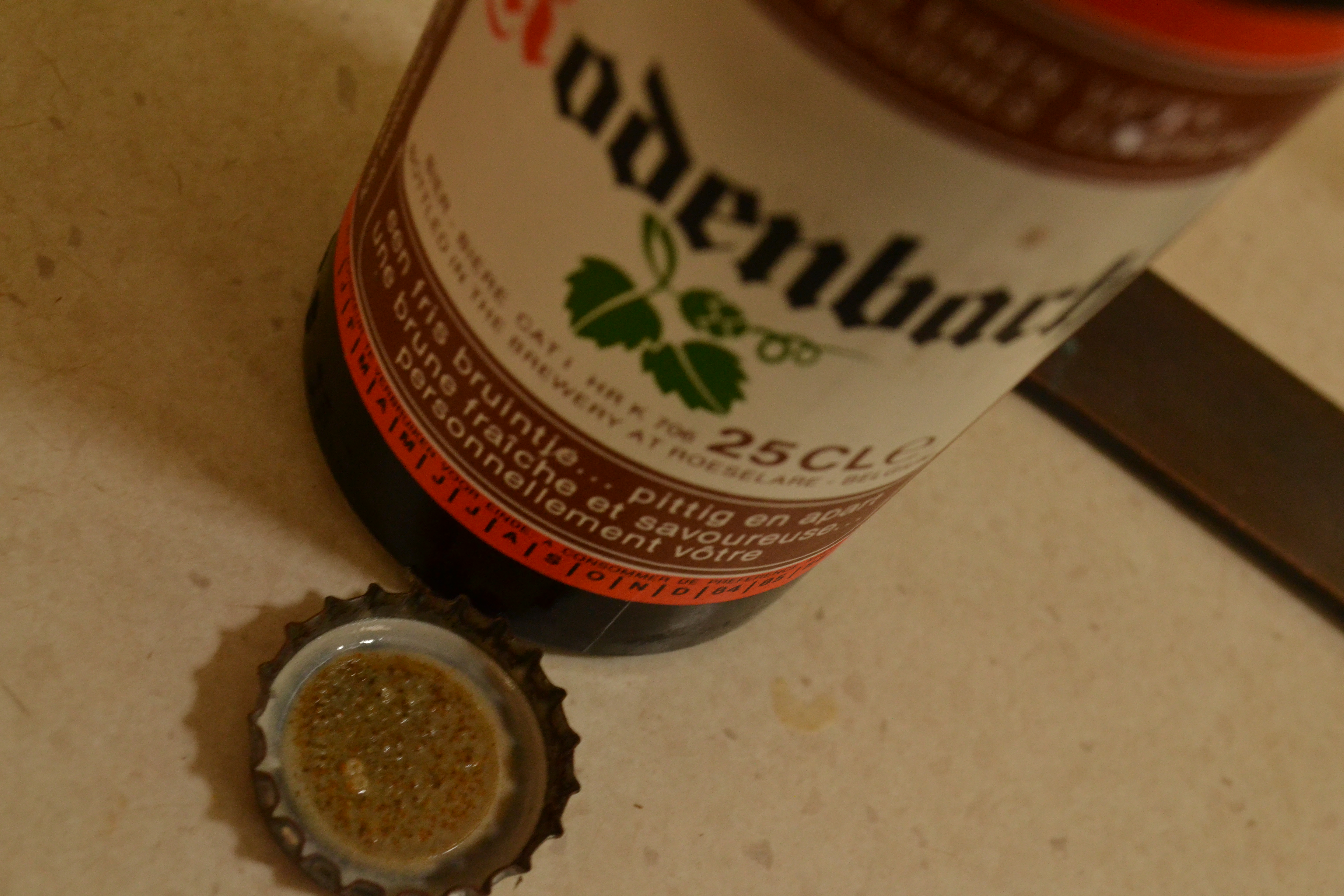 The Liefmans, stored in a corked bottle on its side in the cellar of the brewery, had mellowed significantly. It tasted of brown sugar, vanilla, a little sherry and no real sourness. The vinegary flavour had gone.  The beer was familiar but very different to a fresh one.

The Rodenbach, stored in a Belgian guy’s shed and shipped to Australia (at my, and some fellow beer lovers, expense), was dusty in both flavour and on the bottle. It had a big initial wet cardboard taste, a sign of oxidization – probably the result of the crown caps (the Liefmans was corked) and maybe bad storage.

After about 20 minutes that flavour subsided and I was left with  relatively flat Rodenbach.

And that’s about it.

Neither beer was anywhere near as good as a fresh version but the Liefmans was definitely the most interesting.

Some life in the glass

So what do I think about all this?

Well I think it’s fun to taste old beers but age does not equal taste or interesting flavours. I also think I have a lot to learn about pasteurization and aging beer in general. But again, that’s all part of the fun.

By the way, just to burn any hop heads reading this, I’ve started, and will continue, aging, some hopped up IIPAs. I suspect some dry hopping techniques hold up better than others and I’d like to know who is doing it better. Plus I know it’ll piss some people off that I have beers such as Sierra Nevada Hoptimum just sitting losing their valuable aromas.

All in the name of science. Delicious beer science.