In the words of Hugh Laurie

Have you been paying attention? The once maligned culture of food and drink in the USA is now the hottest ticket in old Melbourne town.

Shit burgers, and worse beer are slowly being replaced in our minds by great burgers and better beer. Long slow cooked BBQ ribs, smoky sauces and fine rye bourbon. Giant IPAs, well crafted rich stouts and wild ales have beer lovers clambering to taste something from the Land of the Free,

While America’s food presence in Melbourne is getting almost to the point of ridiculousness, in terms of beer it is only just beginning. The American section of any good beer shop is still relatively small given the size and influence of the American beer industry but it’s growing almost by the minute.

I was going to get my wisdom teeth out this weekend.

Bear with me, this is related.

We talked about what I wanted to eat before having to suffer through a couple of days of soup and whatever else you eat after getting teeth removed. The criteria was basically, something crunchy and unhealthy.

Ribs were high on my list, as were wings. I fucking love ribs and wings.

I decided on a new place in an old bar that is unique to this whole “rush to more American culture” phase. No ribs, but they do have fried chicken. So part one of my 2 part USA mini-focus is….

Doesn’t it make you just want to go for the name alone?

A while back the crew from the Old Bar in Fitzroy took over the closed down Public Bar. The Public Bar is slightly infamous for being an all night dive bar with great local bands, dirty beer lines and interesting smells.

Also where Emma and I first kissed, at 5am one morning, all those years ago. So romantic.

It had been closed down a while, with a brief period as a cafe or something called “Ms Money Penny’s”. That didn’t last long and I still 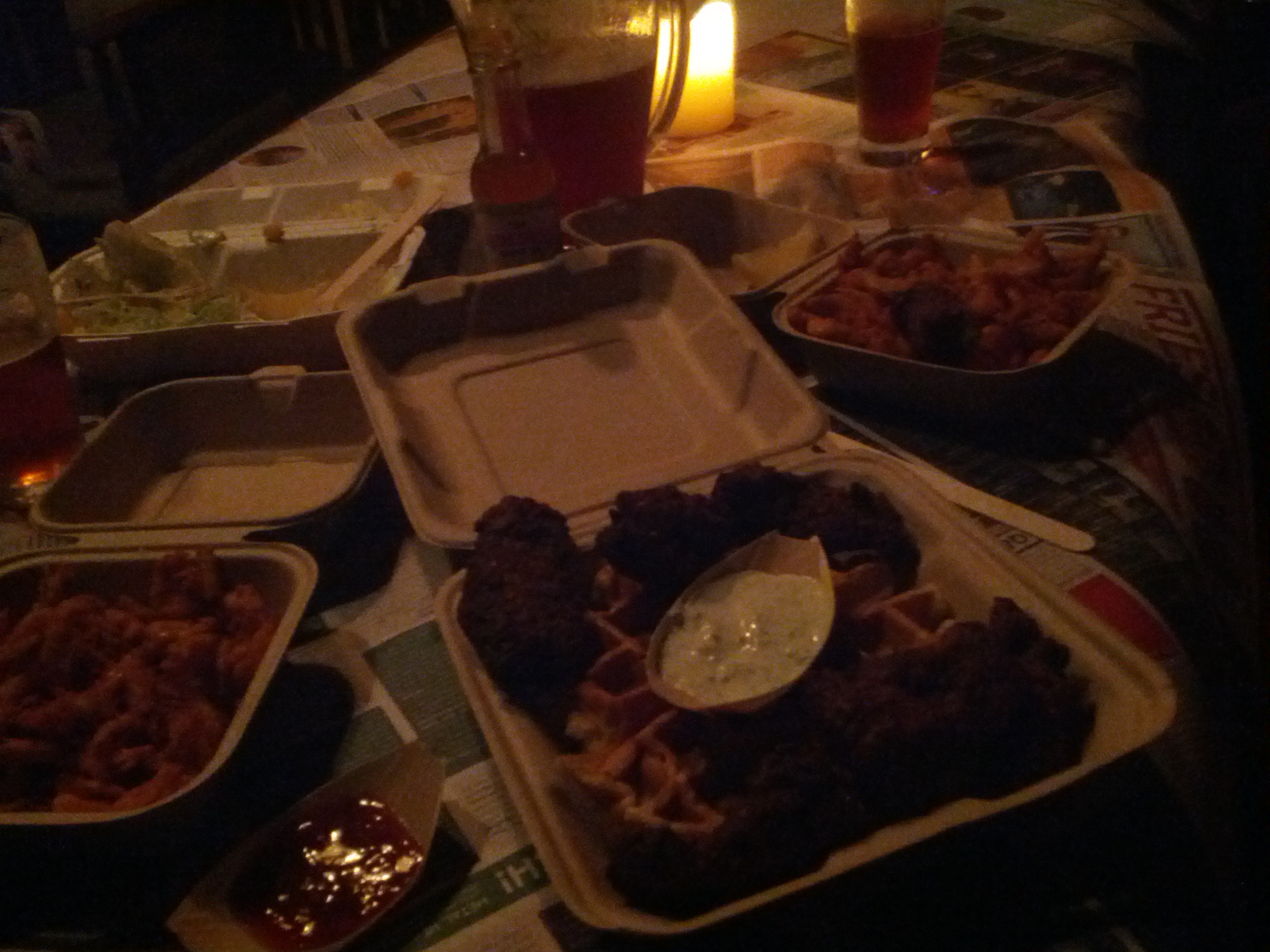 don’t know what it was.

Excited to have the Public Bar back in business, I was even more excited to see they had Mountain Goat Hightail on tap and were soon offering occasional treats from Gumbo Kitchen, a local food truck.

Then they announced they would be turning over their food to this crab shack dealy.

I don’t know a heap about crab shacks other than what I’ve seen on My Name is Earl, but the idea of fried soft-shell crab, fried shrimp and all that kinda thing, couldn’t appeal to me more

Unique to Melbourne it is a welcome antidote to endless overpriced appropriated streetfood in new crowded bars with polished concrete and queues out the door (not that I don’t love me some Chin Chin or Mamasita but it got a little ridiculous there for a while).

Even though my wisdom teeth surgery was postponed we decided to go anyway. And I’m glad we did.

It’s still the same old Public Bar. I don’t think any amount of cleaning could cleanse that place of its many aromas, but with the presence of the crab shack there is newspaper covering the tables and a self serve wooden cutlery and condiments table featuring some great spicy habanero sauce.

Ordering no crab (which I plan to go back for) we got 400gms of Creole shrimp, a cob salad and Southern Fried Chicken with waffles.

Even though we clearly over ordered, the shrimp was spicy and crunchy and oh so perfect with a beer. The chicken was crunchy and unsurprisingly juicy and the waffle soft and sweet with maple syrup.

I don’t know who came up with fried chicken and waffle on the same plate, but they were right.

A rich, fatty, salty, sweet, crispy dinner in a dirty pub on a rainy Melbourne night. Just what the doctor ordered… even if he did postpone my surgery.

Meatmother – Still fairly new, this bar/restaurant specialises in slow cooked BBQ and has a great beer and bourbon list. Get yourself an Anchor Steam Ale, an Elmer T Lee bourbon (neat of course) and some spare ribs with a side of mac and cheese and you’ll be singing the Star Spangled Banner before you know it. http://meatmother.com.au/

Kodiak Club – Their wings with blue cheese dip and celery are a true example of an American classic. They are a bourbon bar so maybe try an old fashioned along with them before easing into something neat. http://www.kodiakclub.com.au/

Carnivore’s Ball – Blogger Burger Mary is throwing a 2 night BBQ bash. Last year she teamed up with the guys from Red River BBQ for a weekly BBQ night at the Worker’s Club in Collingwood. I believe I may have compared tasting her Dr Pepper glazed wings to “finding God”. So yeah.  Details: http://www.burgermary.com/2013/05/carnivores/

Inspired by the crabshack, I decided to go home and liberate my fridge of a couple of big American beers that have been in there a week or so. Tune in tomorrow where I talk about Jester King – Boxer’s Revenge and Brash Brewing – Smoglifter.