Lately I find myself looking at rows of taps and shelves full of beer and there are too many contextless beers that don’t seem to have any purpose. It might be ‘a’ style, or a combination of styles with all sorts of random ingredients, but for all the words and ingredients they still have no style – and not in a good Bruce Lee way, but in a boring meaningless way. 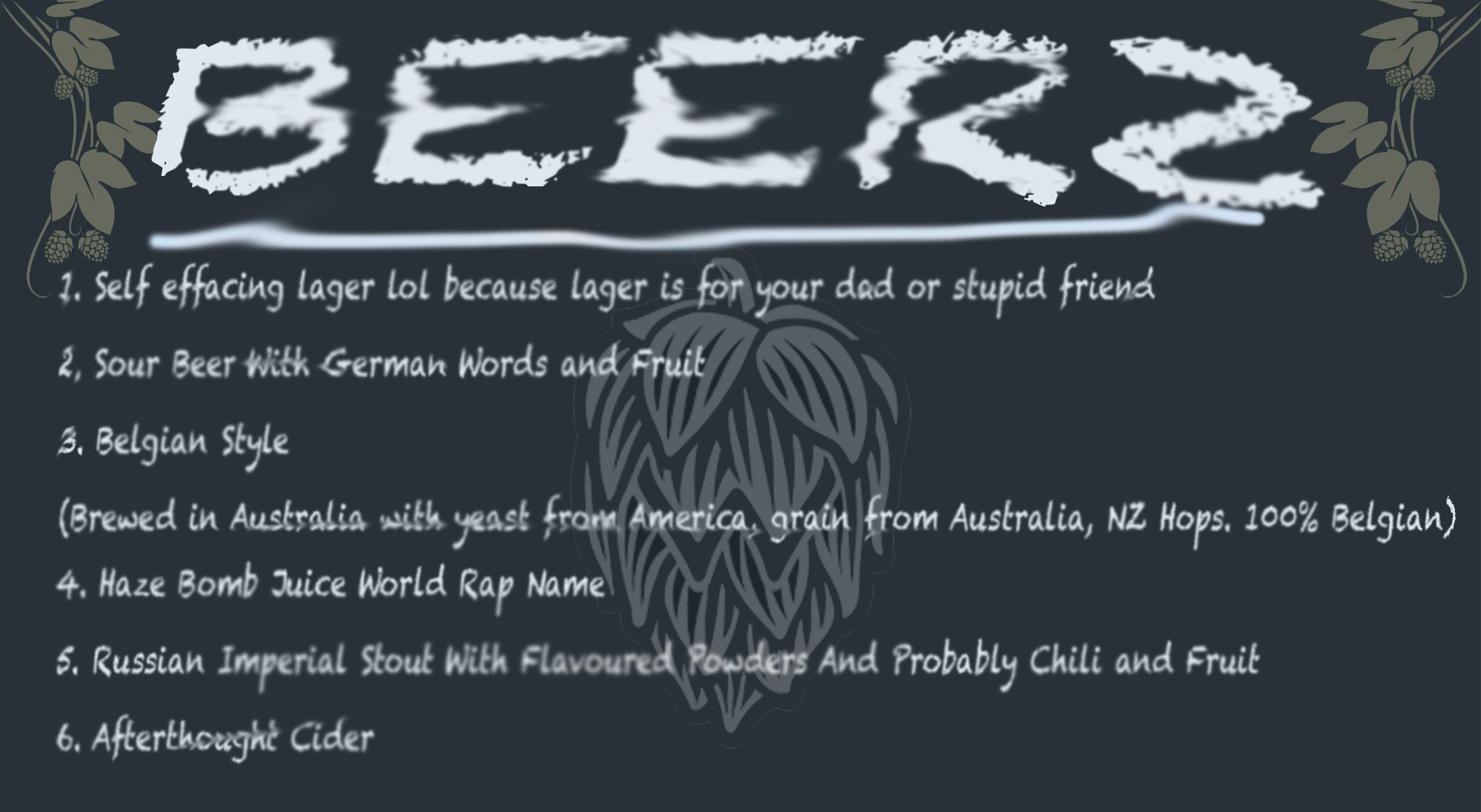 To take this to its rudimentary core: I never want to hear someone tell me there are “two types of beer, ales and lagers” again. Never. Stop it. Because the next thing I’m going to hear is that one ferments at the top and the other at the bottom. No one will ever say “except in Germany, where they invented lager and it’s actually about storage and has zero to do with the yeast” or “except when it’s a mixed fermentation” or “except when the brewer has said one thing and really done the other because it’s easier to use ale yeast”, and what does it actually tell consumers? The temperature it was fermented at? Cool. Good science. Why would 99% of the population ever need to know that? It feels like the beer world is determined to educate rather than communicate. Determined to explain the things that don’t really matter.

Right now we are in some ludicrous phase where everything has labels slapped on and as a drinker I don’t know what half of them mean. What the hell is an XPA and what exactly does it tell consumers when brewers as a group themselves don’t seem to know? Why are some beers labelled as a pilsner but use local hops even though that’s not traditional. Who is right? The people who wrote the BJCP guidelines or the brewer who set out to make the best pilsner with local ingredients? Neither? Both?*

What about that famous British style, the one that was popularised in modern America: The India Pale Ale. I love those that use a combination of Australian and New Zealand hops, but what are we actually telling consumers when we call that an American IPA and does it even matter? Of course it matters! Don’t be silly. The story of the IPA is fascinating, and ever-changing as history is uncovered, changing as beer evolves, and changing as our understanding of ingredients evolve. There is so much amazing history and amazing work that goes into the final product but a lot of the time it seems like IPAs aren’t being made with that in mind. They are being made…

How many pointless sour beers are there on shelves right now – with the words sour, or gose, or kettle sour, or Berliner weisse attached and they’ve put some fruit in it and yeah it tastes good but what is it and ‘why’ is it? I have asked so many brewers that question and the answer is so often “we wanted to make a sour beer”. Maybe they are just guarded or shy but I suspect in a lot of times it’s because kettle soured beers sell pretty well right now, are relatively easy to make, forgiving when you fuck it up (sour + fruit will cover any number of sins in consumers minds), or it’s something they think they should do because everyone else is doing it. How many out there actually know what a gose should taste like beyond “sour and salty”. And I mean what it really should taste like – what the nuance is and what the reason is (don’t ask me, I don’t know. Ask Ron Pattinson or someone. From what I’ve tasted locally it’s anything from a clear slightly acidic beer, to a sour fruit fest, to a salt bomb. Maybe all are right? )

I’ve realised, on my personal level, when I buy and drink a beer I don’t want a style. I don’t want a set of numbers. I don’t want SRM or IBU. I want YOUR style. I want STYLE. I want a glass full of historical context and I want that context to share the story of the brewer, the brewery and everyone that works there. Because when that beer goes in front of someone that’s what is in the glass. The farmer that grew the hops and the farmer that grew the barley. The person that does your books, and the designer who designed the labels. The story of Pierre Celis or the story of Phil Sexton; I want breweries to make something tangible out of all of these intangibles. If a brewery doesn’t know or care why all of these things are important to what they are selling then I don’t want to drink it.

*(trick question, it’s not called ‘pilsner’ in the BJCP)