Edit: since this post, Coopers has released two statements on the issue. They have been added to the bottom of this post.

Edit 2: Coopers have now put out a video statement. They are not continuing with the beer discussed below, and have committed to supporting Marriage Equality Australia. I am honestly surprised but applaud the move.

Hopefully we can move the conversation past this and work towards a fairer world for everyone. Equality shouldn’t be a debate, it should be just how we operate as a society. Well done Coopers.

Coopers – they are a beloved Australian beer brand. Revered for their long standing independent stance and resistance to the big players. And now they are supporting the right for Christians to have an anti-gay marriage stance, but not the right for gay marriage; with their”Keeping it Light” beer in partnership with the Bible Society Australia.

The brewery has always been an unashamedly Christian brand. The Coopers Foundation, their charity arm, often highlight that they aim to foster Christian Values. From their 2016 Foundation Report. (PDF Warning) 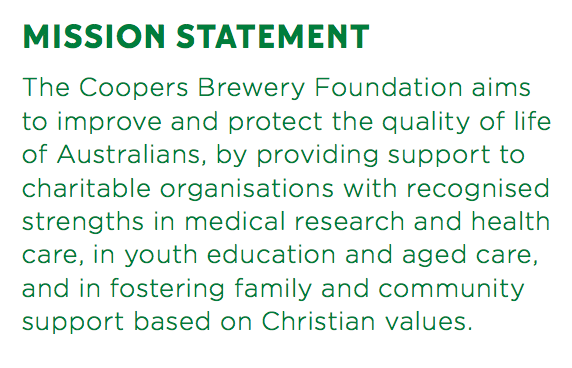 What that means is unclear when it comes to actual details and it’s a very messy road to go down. So before we do, I would like to make clear I have absolutely no issues with anyone who has non-discriminatory Christian values. I have many Christian friends, as well as friends from many other denominations. I was raised Catholic but my stance on religion is one of indifference. I wouldn’t call myself atheist or agnostic because honestly, I don’t give it much thought.

It’s also hard to have problems with giving a charity who support bible donations. There are a lot of great things in the bible and no doubt it’s helped a lot of people – but on the other hand a lot of it is misused to discriminate. And the more I looked at the Bible Society and connected groups Eternity News and the Centre For Public Christianity, a theme arose around gay marriage.

They are painting themselves as martyrs in the debate. Their websites all host a lot of anti-gay marriage opinion that is portrayed as “we need to all have a civil discussion. Stop being so mean to us because we want to discriminate”. They don’t like their discrimination being called literally what it is, discrimination.

This conclusion from Neil Foster on an opinion piece hosted on the Bible Australia website hammers that home.

If there is, as seems suggested at the moment, to be a plebiscite on the question of recognition of same sex marriage, it is to be hoped that respectful public debate can be carried out without a polite statement of one side of the case being “shut down” as offensive or insulting simply because it makes a case which some disagree with. In any event it seems likely that Australia’s Constitution protects robust political debate on these matters.

That’s right. We are being cruel to the poor wee darls because we believe everyone has the right to marry whoever they want.

Neil Foster is also pretty open, on his own website about Transgender issues. You may have guessed already, but he is pretty anti Transgender rights too:

Religious groups, motivated precisely by their deep commitment to transcendent values, regularly engage in service to the vulnerable members of the community. They establish schools to pass on their deeply held values and moral commitments to the next generation. They run hostels and accommodation designed to reflect the moral values of their members and supporters.

If our society makes it impossible for believers to undertake these activities, by demanding that they conform to the majority views on gender equality and the new sexual identity politics which requires “affirming” sexual choices that their religion says is wrong, then we run the risk of driving believers out of the public square altogether. In doing so we will be denying the fundamental human right of religious freedom, and also losing the value added to our community by believers who serve the needy.

Again, society wanting to accept people for who they are, and give them equal rights is a society that is unfair to the poor religious groups who want to discriminate.. They are just trying to help… but not transgendered people.

The Bible Society also have this transcript from an Australian Christian Lobby webcast. Without diving in too deeply, there do appear to be many close relationships between the two groups. In at least, The Bible Society is happy to host the transcript, which includes such rock solid points as this argument from John Anderson:

The progressives when I was a student thirty years ago were against marriage— it was “legalised prostitution”. Now they think it is so wonderful so everyone must have access to it. There’s a contradiction there

Those tricksy progressives! He continues saying:

If the law says same-sex marriage is exactly the same as heterosexual marriage the state will have to defend that view. We may not be allowed to put to our kids the way we want them to handle their sexuality. That will be a denial of our human rights.

Treating gays equally is to deny John his human rights. He may not be allowed to put to his kids the way he wants them to handle their sexuality! What the fuck does that even mean?

It’s not rocket science that kids will do well when there is stability and proper role models.

There is no other way to read that than “gays are not role models.”

The Bible Society can claim these are not their views, and simply hosting a discussion transcript is no evidence of that. However it is clear that the narrative they are happy to support is those who are anti-gay marriage are treated poorly, and thus unable to engage in civil debate.

On their donation partner’s website, the Centre for Public Christianity, that is pushed hard in a series of videos. Avoiding the issue that yes, they are all in favour of discriminating against same sex couples, and instead focussing on the fact that they are being attacked in the debate. You can watch these videos here: https://publicchristianity.org/library/debating-same-sex-marriage

Coopers supporting the Bible Society doesn’t necessarily mean they are in support of these particular views, and when they announced the beer I gave them the benefit of the doubt. I decided not to take a public stance on the issue but decided to boycott their beers at a personal level… until they released this trash fire of a video that I believe pushes the anti-gay marriage stance under the guise of civil debate (edit: the video was released by the Bible Society. Coopers have said conflicting things about their involvement and the Bible Society is clear on their site that Coopers are involved in the campaign).

This shitty tactic will no doubt use opinions like mine as evidence that they are being poorly treated. But hey, it’s like the old saying goes, “If you have discriminatory views, you get treated like assholes”.

Anyway, here’s the video. Go jump in a lake Coopers.

Statement 1 – where they continued with the “light hearted” debate line. 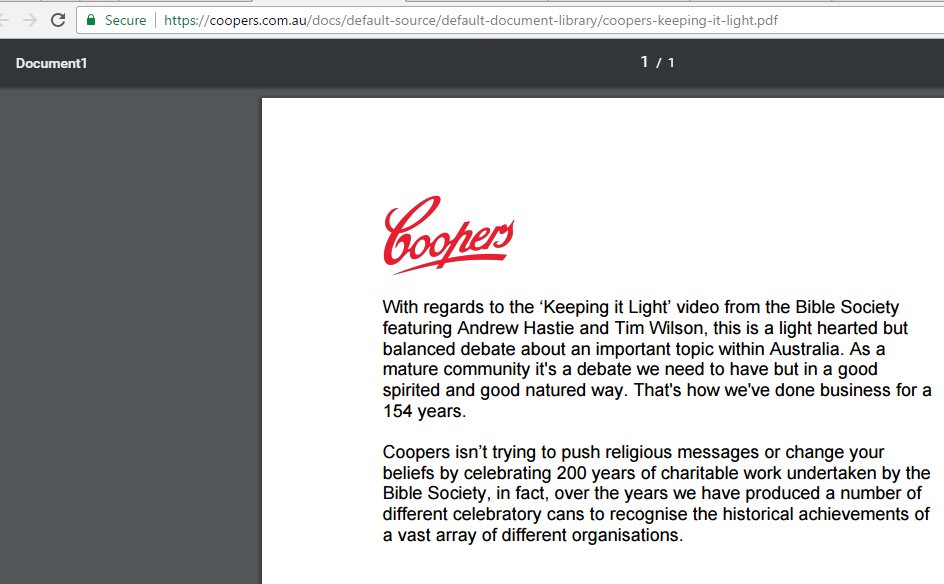 And Statement 2, bailing out of any involvement with the video. Unsure why that wasn’t part of the first statement. As many have pointed out, there are no names attached to either one. 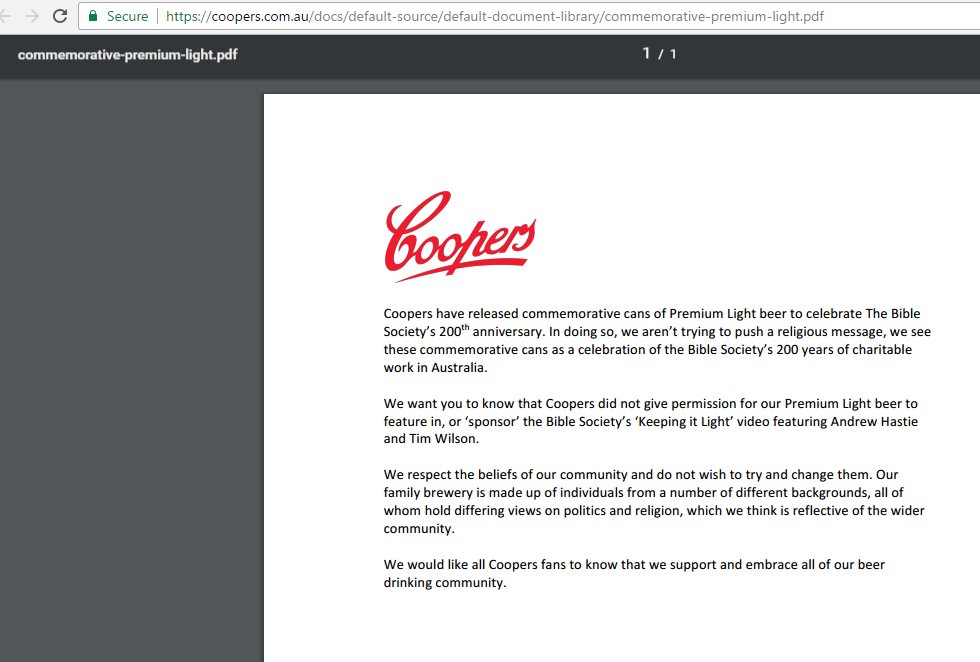