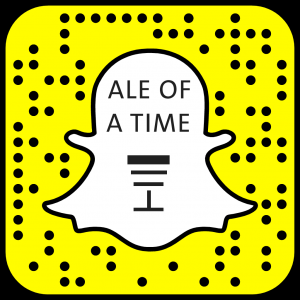 Breweries and social media have an interesting relationship with most small breweries keenly aware of Twitter, Facebook, Untappd and Instagram; and how it’s an easy and cheap way to market your product. While many breweries still make fundamental mistakes, I think it’s reasonable to say that as a whole it’s helped drive craft beer as a market segment. With it many breweries have been able to get their brand out to a much larger audience than without.

Right now everyone is talking about Snapchat. As a business, it’s at the point where you may not be able to ignore it – at the very least you need to be aware of it.

While the majority of its users are under 25, Snapchat are working hard at changing this and it’s working, with recent stats saying that growth of 25-34 year olds using the platform was 103% for 2015, while over 35s grew by 84%. In the beer world, those are important demographics.

The big reason why I believe Snapchat is useful to your brand is the lack of noise when people are engaging. If they are in your story, they are in your story. As opposed to Twitter/Facebook/Insta/Youtube where on any page users will see plenty of other accounts to engage with and distract. On Snapchat if they have clicked on your story then you have their full attention.

To put it in modern marketing speak: It’s a distraction-free content-marketing platform.

So as a brewery, how do you make Snapchat work for you? I’ve brainstormed five ideas to get you started. None of them require too much work and should complement everything you are doing already.

Beer geeks and homebrewers are dying to know what ingredients you use, what your system looks like and how a day looks. Given Snapchat’s 24 hour stories, where you share snapshots and videos into your story, it couldn’t be more suited to showing a brew day.

It’s an ideal way to show off the personality of your team, your brewery and bring your drinkers and potential drinkers closer to the process than they could possibly get otherwise. Snapchat couldn’t be a better app for this process.

An extra step would be bringing the drinkers in even closer by asking them for input as you go. For example, you could give your followers the option of two flameout hops at the start of the day, and ask them to vote for one by the end of the brew.

Breweries often try this using Youtube as a platform. Which in theory should work but Youtube is a prime example of a page full of distractions. While watching your video, drinkers are also likely to be scrolling through their recommendations at the same time. That’s a fast way to lose engagement.

Additionally most youtube tasting vids tend to drag on. They aren’t edited as well as they could be and as a result it’s five minutes of video for a few tasting notes.  Snapchat forces you to keep things pithy, with 10 second segments. It helps guide your structure and keep a tight and engaging narrative.

Divide each beer you are showcasing into a series of criteria – style, ingredients, appearance, aroma, and flavour. Spend 10 seconds on each and you have a 50 second series that users can watch with no distractions.

Also consider setting aside the day in advance and invite customers to taste along with you.  Make them feel like they are getting a personalised tasting, and give them a reason to revisit your range.

Out and about with sales staff

Give your best salesperson the account and get them to tell their story throughout a day on the road. Show us the bars and bottleshops that your product is going into. Share the characters they meet along the way and show the good relationships you have with everyone.

It’s a snapshot of the personality that your brand is presenting, and a side that most customers don’t get to see. It also advertises where your product is, and invites them into the venue with you. Highlighting your beer at the venues you like doing business with.

Festivals or dinners are a great way to showcase your brand to a new audience. Why not use the opportunity to increase that audience with a Snapchat story to go alongside it. If you’re meeting new customers who are being won over by your beer, then grab their reaction on snapchat.

Or if it’s a dinner, show the menu and the pairings. Share what they’ll be beforehand and invite your Snapchat audience to try do something similar at home.  If they can’t be there, give them a way to feel like they are (and a reason to buy your product at the same time).

Often Snapchat’s temporary nature is seen as a negative. You’ve put a lot of effort into creating a story and then it’s gone. But turn that frown upside down because nothing could be better for your brand.

All that means is you can easily recycle your ideas. If you do that on instagram or youtube then it looks ridiculous. As a result, that great idea you had a year ago is now buried way down at the bottom of your feed or video list. You can’t really repeat it because it’d look weird. You can probably repost it, but do it more than a couple of times and you just seem desperate.

Snapchat gives you the chance to do it all over again. Obviously doing the same thing every day will get old fast, but think about the tastings above and how you can essentially repeat them but keep it fresh. Highlight packaging changes, or recipe changes. Get someone else in your team to host it, or find your most loyal customer. Do a Snapchat brewday once a week; and hosted tastings once a month.

You can reuse these ideas over and over on Snapchat, and they will continue to engage your customers.

Snapchat should be on your radar if you are serious about having any sort of social media presence. Should the rise of Snapchat continue, then having a plan, and strong content like the above will give you a leg up over the competition. Now is the time to get ahead of the game.

If you are looking for further social media advice regarding Snapchat, or other platforms, please see our Work With Us page. We would love to hear from you.