This is only the second Red Duck beer I’ve tried in over a year I think. The other, was only a few days ago.

Despite them releasing a ridiculous amount of beers in the last couple of years, I have pretty much stopped paying attention. Not because of some moral issue, or that I don’t think they make good beers (or I should say “he makes”, as it is pretty much a one man operation), but rather when I look at a line of their beers and see 15 different options at any one time I can’t help but feel it’s a bit of a crap-shoot.

There are definitely breweries that I spend more time  “spraying and praying” than refining recipes.

I don’t know how Scott from Red Duck brews so I can’t 100% say that applies to him, but from the outside looking in that’s what it appears (Scott, if you read this, wanna come on our podcast and talk about your methods?).

Right now, I would rather spend my money on beer that I know has taken thought and refinement rather than an experiment.

The other one I tried earlier this week was Ra#4. His Egyptian bread beer. From memory I had tried #2 a couple of years ago, so I didn’t really know what to expect (it changes each iteration),

I have to say, I thought it was pretty amazing. Maybe one of the most interesting beers around that did more than just be interesting for the sake of it. It was drinkable and intriguing and enjoyable. There isn’t much more I want in a beer.

When I reviewed the first Gruit 3 years ago, I didn’t know what a gruit really was.

Now I know that basically it’s a beer with no hops, and other herbs and flavourings are used. There was a time when hops weren’t used in beers and these beers hark back to those times.

My review back then said I didn’t think I enjoyed drinking it.

Let’s find out how this one goes. 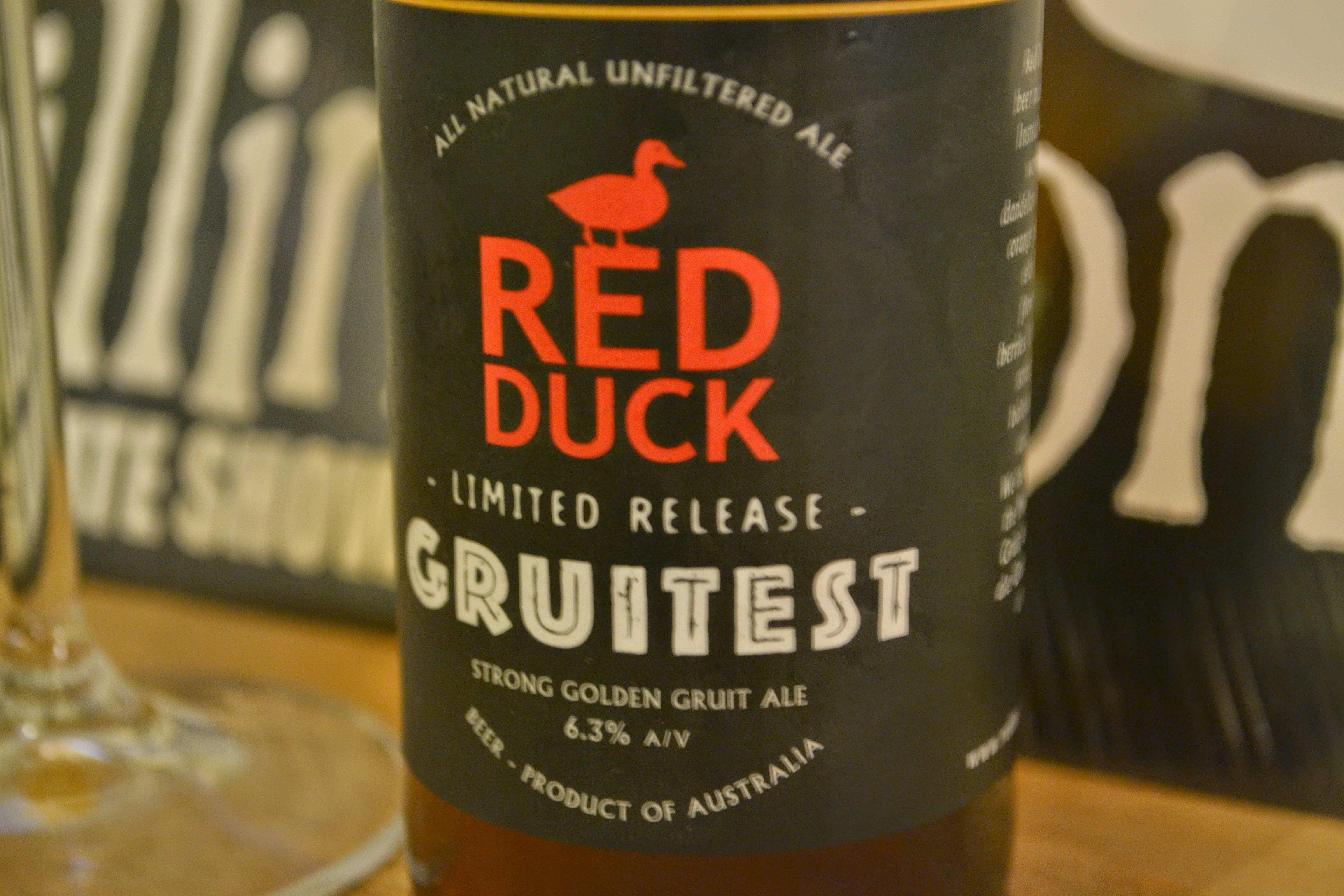 As said, this is from Red Duck. Based in Ballarat Victoria, the beers are available reasonably widely around Australia. I’m not sure where I got this from as I picked it up a few months ago. Maybe Slowbeer in Melbourne? Maybe not.

This is a Gruit which, as mentioned above, is basically a historical style of beer brewing using a range of herbs and spice, rather than the now ubiquitous hop.

The beer is stylistically a strong golden ale (being gruit, it can really have anything as the base beer).

In the glass it is dead flat. No carbonation at all, and is a bright orange and gold colour.

Watermelon, sour green apple, but there is also a distinctive white wine aroma to it. Apricots and peaches that remind me of Riesling and as it warms possibly hinting at a Sauvignon blanc.  As I get deeper into the glass, it only increases.

It’s intriguing and far more pleasant that the ashy-memory of the last one I had. But I’m not sure, with so much going on, that I completely love it.

It’s definitely far better than I expected. There is a gentleness to it that allows some great but subtle flavours with smells that wrap around the glass. Given I expected something bolder, darker and a lot rougher round the edges I’ll have to say I’m surprised.

However there does seem to be something missing. It drinks like a half strength wine, and not having the hops of a beer, alcohol warmth of a wine, or some wild yeast; I’m left a little unsatisfied.

I really want that last piece of the puzzle to tie it all together.

I don’t want to take away from the beer at all because it really has so much curiosity that it is both interesting, notable and memorable but it just isn’t quite there for me.

What would be interesting is that with many vinous characteristics I imagine you could present it to any wine lover and I’m a 100% certain they wouldn’t bat an eyelid about its origin being grape rather than grain.

That alone makes this beer remarkable in my eyes.